Review: HOW TO RE-ESTABLISH A VODKA EMPIRE 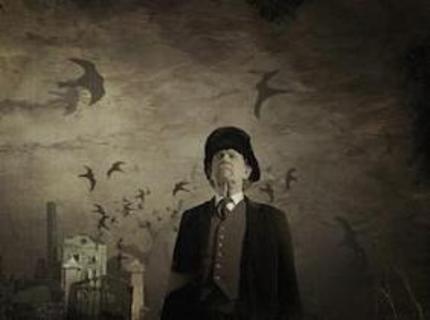 Daniel Edelstyn's ramshackle but absolutely captivating documentary How to Re-Establish a Vodka Empire is a pretty good argument for the idea that, if you're not sure how to tell your story, you should just throw all of it at the wall and hope something sticks. The story of Edelstyn's belated attempt to get in touch with his Ukranian heritage, and the way this changed his life, Vodka Empire is eighty minutes that succeed in holding your attention despite the director's somewhat, uh, temperamental skills as a filmmaker.

The man gives us everything, regardless of how it represents him, his relationships or his narrative; he looks alternately like a naif, a painfully nervous Englishman abroad, an child on the verge of a temper tantrum or the quintessential solipsistic genius at work. Vodka Empire is part vanity project, part history lesson, part half-assed social commentary (like a repertory company take on the great West of the Tracks), and yet the sheer madcap energy behind it and its fascinating subject are impossible to ignore.

The catalyst was Edelstyn's discovery of the diary entries his grandmother left behind. The woman had the kind of storied life that would catch most people's attention; first born into a wealthy family in the Ukraine, she then had all that snatched away when Lenin and his Bolsheviks overthrew the Russian aristocracy and subsequently instituted Communist government after the October Revolution of 1917. Once the chaos that followed meant Russia had grown too dangerous, she fled across Europe and ended up in Belfast with Edelstyn's grandfather.

As the director explains, the implication from his grandmother's journals is that she hoped her son would go back some day and find out what happened to the family's legacy. But Edelstyn's father (now some years deceased) never made the trip, so now his son the director feels compelled to go in his stead. Yet once he's actually out there, seeing the reality of the poverty-stricken areas of rural Eastern Europe first hand, the journey becomes less about making a pilgrimage and more about doing something to honour his ancestors - and the most practical of all the available grand gestures seems to be to buy up the vodka brand his family used to trade under.

Edelstyn admits almost from the start that people thought he must be delusional, and his struggle to come to terms with the enormity of what he's taken on informs much of the film, for better or for worse. He doesn't strike you as desperate or insecure per se, but the way he stuffs the eighty minute running time with anything and everything he can think of still feels like an attempt to validate it to someone. Vodka Empire uses cheap and cheerful DV, grainy newsreels, voiceovers in character, ancient news clippings, handicrafts, even green-screen amateur dramatics for key historical flashbacks.

And all of this gets mashed into an awkward collage with only enough thought for pacing and dynamics in any given scene to get it that much closer to the final credits. Edelstyn describes himself as a 'struggling filmmaker', and you wonder if he's struggling because he's still got a lot to learn. There's talent here, an eye for a good shot or a comic aside, and there are moments where the camera lingers on an ancient photograph or a particularly well staged composite shot among the flashbacks which feel pretty much magical. But taken as a whole, far too often it just whirls from one plot beat to the next without giving any of it enough time to breathe.

And again, Edelstyn's willingness to show himself up isn't entirely a bad thing, but there are moments you really wish he could have reined in his need to show us everything. The director's shock at how bad conditions are in the village around his family's holdings make it seem as if he's never read a newspaper in his life. Ditto his anguish at the hurdles he encounters in pushing the vodka on UK marketing and distribution. A moment of drunken reflection where he cheerfully admits he's forgotten what little he learnt about business in school makes the man look like an idiot as much as it gets you to empathise with him.

For all the occasional moments of staggering clumsiness, though (this is a man who can say 'It was as if a powerful spirit had possessed me in the distillery' without a hint of irony), Vodka Empire is still a fascinating documentary. Yes, there's not much new about the history therein, yes, Edelstyn keeps coming across as juvenile, ignorant or headstrong, but for all the shoestring production values and slightly unhinged atmosphere about everything it still makes for hugely entertaining viewing.

Partly it's that there are flashes of beauty, real humour or genuine candour, but also Edelstyn just feels like a decent guy. Perhaps you could call him naïve, even delusional, but most of the time when he's baring his soul it does seem as if he honestly wants the viewer to feel what he was going through, and what he put the people close to him through (not least his patient girlfriend). It's not altruism as such, but Edelstyn's attempts to do right by his grandparents and whoever they were connected to does feel as if it's rooted in the simple need to accomplish something that other people can benefit from more than he.

And his grandmother does seem to have led a hell of a life, which Edelstyn does his best to take full advantage of. Vodka Empire intermittently touches on nearly everything from her privileged childhood to her final years raising his father in Belfast, and the director does his best to give all of this some kind of context. It's hardly a message for the ages, but again, Edelstyn clearly means well, and many of the stories he turns up manage some dramatic weight - even if the man can't stop throwing in embarrassing, off-kilter vignettes right up to the moment he finally tracks down his grandmother's grave.

Much more than the sum of its parts, then, Vodka Empire is a wonderfully idiosyncratic little voyage of self-discovery - for all the director's technical foibles, and his strange obsession with (figuratively) beating himself up in public as often as possible. It hangs together by a very slender thread, at times, and will probably have more than a few audiences cringing, but it should still end up winning them over. Edelstyn can be a trial on film (and possibly in real life, too) but the grand ambitions behind his journey and his honest desire to do right ultimately make him someone to root for. If you're in the mood for something truly individual, consider How to Re-Establish a Vodka Empire strongly recommended.
Sign-In to Vote
Tweet Post Submit

The website for How to Re-Establish a Vodka Empire can be found here.

At the time of writing the film has started on a limited cinema release around the UK. The remaining dates are as follows:

1 May – The Courtyard, Hereford