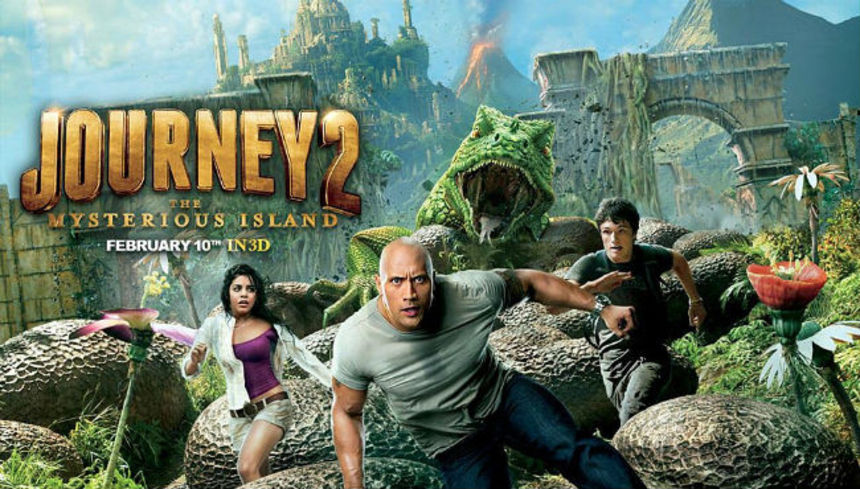 Taffy. Journey 2: The Mysterious Island, the latest cinematic adaptation of an adventure first told by Jules Verne in 1874, moves as though it's picking its way delicately through a field of taffy, not wanting to leave any impression of its passage.

Journey 2 is a producer-driven, family-friendly package. It's a sequel to 2008's Journey to the Center of the Earth, which made more than $240 million worldwide as one of the first movies out of the gate in the new 3D era. Headliner Brendan Fraser is gone, replaced by Dwayne Johnson as Hank Parsons, a former military man and current police detective.

The character link between the two installments is Josh Hutcherson as Sean Anderson; Fraser played his uncle in the first film and Johnson is his new stepfather in the sequel. The story link is a belief in Jules Verne's writing as real-life accounts rather than works of fiction. Sean has become a "Vernian" and, as in the first film, a relative is again missing. In the first film, it was Sean's father; this time, it's Sean's grandfather, Alexander Anderson (Michael Caine, in paycheck mode). He sends Sean a coded message that Hank helps to decipher. Sean is worried about his Grandpa (or Grandma, as Johnson's annoying, unamusing trash talk would have it), so Hank agrees to fund a trip to the South Pacific in search of a legendary uncharted island, with the idea that the trip will give them an opportunity to bond.

On the final leg of their trip, they are accompanied by helicopter pilot Gabato, AKA Comic Relief (Luis Guzman, in cheeseball mode), and his daughter Kailani, AKA Love Interest (Vanessa Hudgens, in "how are those perpetually damp clothes clinging to her body without exposing anything" mode). Once they arrive at the titular location, they quickly locate Grandpa and enjoy many brief adventures with friendly CGI creatures (tiny elephants, giant bees) and digitally-created landscapes, mixed with real-life footage of the beautiful Oahu, Hawaii. The script, credited to Brian Gunn and Mark Gunn (Bring It On Again, 2gether) and based on an original screenplay by Richard Outten, freely mixes elements from Verne's novel -- itself a sequel of sorts to Verne's "20,000 Leagues Under the Sea" and "In Search of the Castaways" -- along with Robert Louis Stevenson's "Treasure Island" and Jonathan Swift's "Gulliver's Travels," suggesting that all three novels were based on the same real-life island, though it feels more like a party-planner offering a menu with a little something (familiar) for everybody who might be tempted to attend.

And, for an old-school book lover like me, there's something strangely disconcerting about a movie that is proud of its literary roots and features a young hero who is an unabashed fan of a 19th century novelist, yet happily allows Hank to rip the pages out of three different books just so he can quickly make a point. (It reminded me, unhappily, of Roland Emmerich's The Day After Tomorrow, in which the characters were all too eager to burn hundreds of irreplaceable books at the New York Public Library simply to stay warm for an hour or two.) Where's the respect for books, Hank?

Director Brad Peyton (Cats & Dogs: The Revenge of Kitty Galore) injects nothing of interest into the project; it's left to Johnson to flex his pectoral muscles, which display more personality than the movie as a whole, and sing "Over the Rainbow" on a ukelele to distinguish the sequel from its predecessor.

The movie is bland and resistible for most people, but it's not meant for most people; it's intended only for audiences of a certain age: pre-adolescent boys and girls, and their conservative parents with disposable income. They might enjoy visiting a colorful island where the dangers are not too frightening, the romance is chaste, the parental figures are loving and supportive, and the teenaged characters learn from their mistakes.

I can't help thinking, however, that those young people and their parents would be better served and more entertained by picking up and reading -- not tearing pages out of -- Jules Verne's novel.