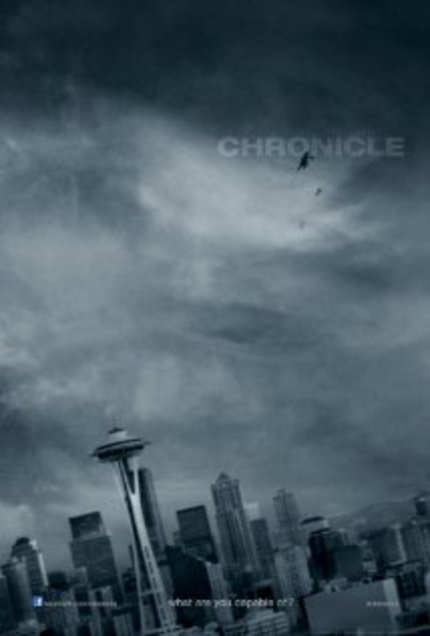 Packaged as a teen-centric superhuman drama, "Chronicle", eventually manages to wring genuine thrills from a variety of well-worn genre tropes. With its camcorder immediacy and 20+ aged high school seniors, "Chronicle" may look like stale contemporary TV, but ultimately delivers well on the powers-without-capes premise of "Smallville", which itself (ironically) owes heavily to the super-humans-with-real-life-problems concept of the first Marvel comics. Under its handheld hip exterior, "Chronicle" is really a classic comic book origin story and subsequent smack down. If, as David Carradine postulates in "Kill Bill Volume 2", that Clark Kent is really just Superman's commentary on humanity, then perhaps the camcorder dressing of "Chronicle" is it's makers (director Josh Trank and writer Max Landis) commentary on the current culture that is still devouring and making over super hero concepts of decades ago. Or, maybe it's just another one of the makeover artists looking to tell it's own twist on the familiar. Whichever the case, the visceral nature of the core spectacle makes it a success.
Known by leery audiences for their sometimes-puke-inducing vertigo, camcorder movies seek to define themselves by being on the cutting edge of modern visual language while also maintaining a verite-fused footing in traditional storytelling. In order to overcome their inherent negative associations, conventional cinema audiences demand that all camcorder movies work extra hard to justify their existence. And the good ones do, making the style's intended sense of visceral immediacy work for them (See "Troll Hunter", or the first "Paranormal Activity").

Here, the "found footage" notion of such films is once again pushed to extremes of general behavioral logic as we question why the camera must be continuously running. (And we get the usual answer, dating back to "Blair Witch": Camera-induced Reality Separation Compulsion! Or, CRSC - a syndrome more common in movies than in real life.) We are lured in to thinking that this may just be a run of the mill assemblage of faux-found footage - but then the telekinesis kicks in (cool!), the characters' nosebleeds start up (uh oh!), and the visual effects set in (whoa!). And this works. By the end, "Chronicle" ratchets up the camcorder plausibility even as the story itself soars into a classic super-human spectacle of mass property damage and good versus evil melodrama.

"Chronicle" coaxes one into a false sense of the blahs with its relatively slow-going early portion, which only serves to effectively up the dazzle-factor of the final showdown. One extended winning sequence, fully realized as point-of-view camcorder footage by an understandably panicked shooter, involves a car and the Seattle Space Needle. It is around this point that other "found footage", including security camera material and news coverage, heavily becomes part of the narrative timeline. Which makes sense, since by this time, as the action spills out into the world proper, there would be more video footage of the unbelievable craziness available than anyone could ever use. YouTube alone would be downright lousy with freaked-out uploads of "Un-caped wonder stuns city!" minutes after the events went down.

For the filmmakers of "Chronicle", who are out to convince us of their meta-human as meta-reality concept, it's interesting that we've arguably reached the cultural place where the former is the easier sell. It's true in one sense that every "X-Men" movie (a franchise which this origin story also owes a bit to) has faced the hurdle of convincing audiences that their notions of paranormal-powered individuals can exist in the confines our known world. But on the other hand, that audience is an easier sell, as there is no visual element in play (the camcorder) constantly screaming, "Hey look, this is all REAL!!!!" That "Chronicle", during its running time, improves in this regard, even as it increases exponentially in the unreal pyrotechnics of the "Superman II"-style citywide super-brawl, is a true testament to the film's cast and crew.

Rendering all the visual effects to match the handheld aesthetic has got to be a lot harder than rendering the same action conventionally. Then again, "Chronicle" is a lot less shaky than most "shaky-cam" efforts, which further my own guess that this film was initially shot for 3-D, and then released in 2-D when the cool kids decided 3-D wasn't cool anymore, sometime last year. That wisely leaves us with what will always be cool - a super hero origin story that culminates in a high-drama high-flying battle, which in the end earns our enraptured attention.