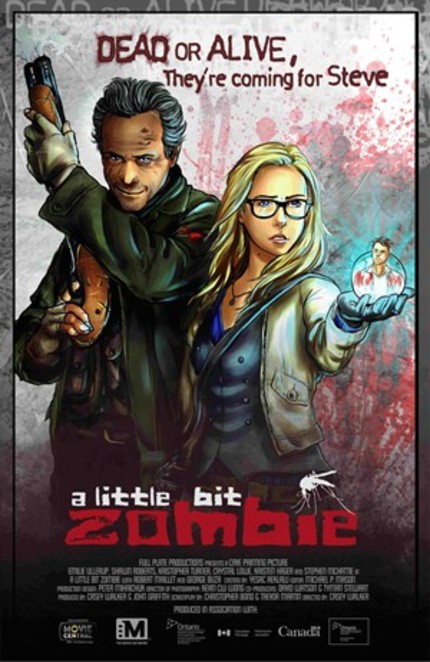 Freshly announced as a Canadian Gala presentation at the Victoria Film Festival, Casey Walker's debut feature A Little Bit Zombie aims to introduce a fresh spin on the zombie comedy.

In the screenplay co-written by Christopher Bond, co-creator of 'Evil Dead The Musical', and Trevor Martin, Steve (Kristopher Turner) gets infected by a virus the week before his wedding and tries to keep it together so as to not incur the wrath of his Bridezilla-to-be (Crystal Lowe). While he attempts to fulfill his overwhelming desire for brains he must elude an obsessed zombie hunter (Stephen McHattie), who is hot on his trail.

The connection to the Evil Dead musical is one reason to take note of this one, the casting of Pontypool star Stephen McHattie another. Take a look at the trailer below.
Tweet Post Submit

Do you feel this content is inappropriate or infringes upon your rights? Click here to report it, or see our DMCA policy.
Casey WalkerTrevor MartinChristopher BondKristopher TurnerCrystal LoweShawn RobertsKristen HagerComedyHorrorSci-Fi

More about A Little Bit Zombie