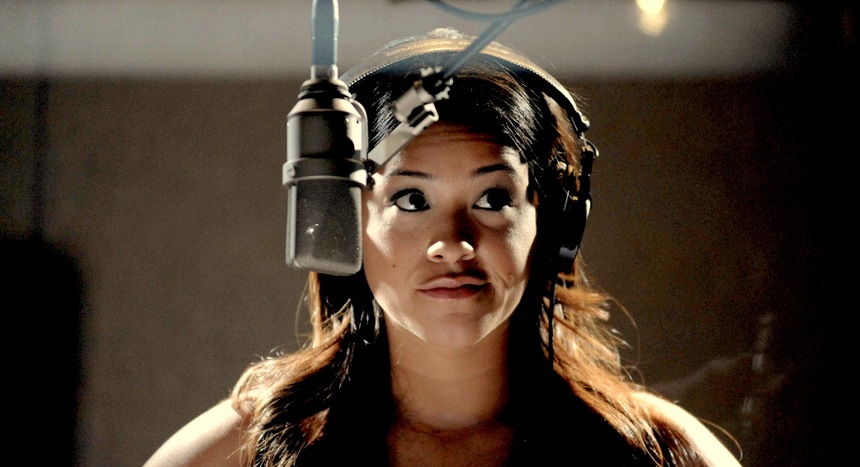 I can't say enough good about Filly Brown, the first film from directing team Michael Olmos and Youssef Delara. They have both directed their own features independently, but clearly this was a team that was meant to be. Not only is Filly Brown expertly directed, but Gina Rodriguez is stellar in her breakout performance. Like Jennifer Lawrence in Winters Bone two years ago - this girl is going places. Bolstered by a solid supporting cast lead by Lou Diamond Phillips, an amazing soundtrack and a script that hits every beat perfectly, Filly Brown is a must see.

Rodriguez plays Filly Brown, a feisty young woman who has had to grow up quickly. Whether its taking care of her little sister, working in her uncle's tattoo parlor and trying to make a name for herself as an MC, this girl doesn't take shit from anyone. At one point, when a well known rapper smacks her ass, she smacks him in the ace and puts him in his place, eliciting whooping and cheers from the audience in the theater. It's this zest that makes you fall instantly in love with this character. You are rooting for her from moment one.

Filly Brown takes place in Los Angeles - it wasn't just shot there, but it really takes place there - and the setting provides much of the tone and milieu for the film. It gives great insight into many aspects of the Latino experience, the rap and hip hop scene and the challenges of being a young girl growing up with her mother in jail and her father working constantly to make ends meet.

On the outset, I was expecting I'd be comparing Filly Brown to Hustle and Flow. Both are indie films with a central character using home grown rap to find the success they need, for reasons more important than just the money. I really hope that Filly Brown isn't overshadowed by those parallels because this film is very much it's own story with it's own style. It feels fresh and perceptive. It's one of those movies that feels like a window into a part of the world that is right down the street and yet so far away. The insights offered into this world along with a more than compelling story make this a film to look out for, even if the subject matter doesn't seem like it would be your cup of tea.