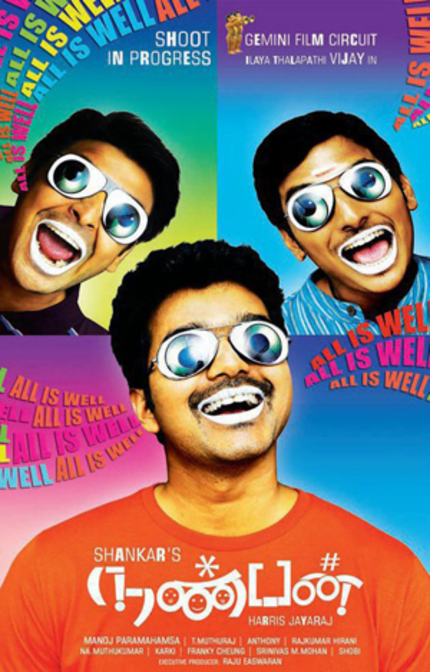 If I were going to fashion a review of Nanban in the spirit of the film, here's how I would do it:

Step 2: Copy and paste the entire review with my own name attached to Twitch

Step 3: Pick out three or four paragraphs and change their text from Times New Roman to Arial, and from black to sort of a medium gray.

So yeah, you get the idea.

Nanban is the Tamil remake of the Hindi mega blockbuster and worldwide hit, 3 Idiots. I did myself the favor of watching 3 Idiots this morning to have a basis for comparison, and boy, now I feel like I've spent six hours watching the same film in one day. It was exhausting. Tamil wunderkind director, Shankar, took on the project as his follow up to the mega successful Enthiran (Robot). The idea, I suppose, was to have a cooling off period between expending ten years of built up creativity with Robot and his next big passion project, still undetermined. In the meantime, a man's gotta eat, so he took on the inevitable remake of 3 Idiots to pass the time.

3 Idiots was a heart-warming tale of three college students who break free from the pressures of academic competition thanks to the magical power of Aamir Khan's elf ears. In all seriousness, the film is pretty funny, if overly broad, and it holds up well as a basic masala entertainer. There is really nothing subtle about the film, not least Khan's performance as Rancho, the mystical force of nature that guides each character through life, somehow having accumulated a lifetime's worth of wisdom by the time he's 20. It sounds hokey, but I have to admit I teared up a couple of times.

Shankar's version of the story is EXACTLY THE SAME. The only things changed are the names of the characters, to sound more Tamil, and the locations (moved south). The dialogue is even identical in most cases. It was baffling watching this film, which I'd just seen earlier in the day, being reenacted by a team of inferior performers. Vijay, while he has a quiet charm, does not possess the self-assuredness of Aamir Khan, and his character is far too laid back to engage his roommates as he appears to in the film. Watching these actors aping the Hindi film was less irritating than just confusing.

Remakes across film industries is a common practice in India. For example, this weekend also sees the release of the Telugu version of Bodyguard, which was first a Malayalam film, then remade in Tamil, and Hindi. It happens all the time, but usually there is some kind of local flavor added in, some spice or customs that can help viewers differentiate between the various versions. Otherwise, it is much cheaper to simply dub the film into the local language and release it that way, which also happens frequently. There is no local flavor in Nanban, it is all the same.

My main beef with Nanban is how fucking incredibly lazy it is, and in particular Shankar. Shankar's last three films, Anniyan, Sivaji, and Enthiran, have been incredible, outlandish, and exciting. He has a proven visual style and a creative energy that is hard to match. There are a grand total of about 15 minutes out of this three hour film that showcase any of Shankar's massive talent.  Other than that, it is strictly shot for shot. I swear, in several sequences they are even using the same god damned props! The worst part about it is that Shankar shows us flashes of brilliance, but can't help doing it in a meta way.

Shankar is known for his extravagant songs picturizations, they are remarkably entertaining, and he has certain tropes to which he returns regularly. In Nanban, there are two songs in which the director appears as a camera swoops in on the song being shot, with clapboards proclaiming "Shankar Love Song", "Shankar Modern Song", "Shankar Folk Song". The images that follow are ripped almost directly from songs in Sivaji and other Shankar films. There is no other way that even a fan of Shankar would be able to tell that he was involved at all. In one sequence, a character refers to Shankar's trademark fondness for CG, it's so meta it hurts!

When I think about the goings on on-set during the filming of Nanban, all I can really imagine is Shankar sitting in his director's chair counting money while playing a DVD of 3 Idiots and "directing" his subordinates to just copy what they see. "Um, yeah, just, um, do that..." For those people out there who haven't seen 3 Idiots, and there are probably at least 20 or 25 Indians left on the planet who haven't, I can see Nanban being a whimsical diversion, for everyone else, well...