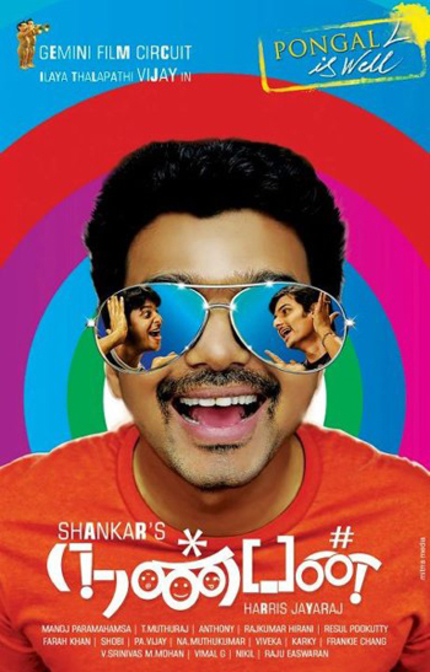 Every year it seems we get a new all-time Indian box office champ.  Just since 2007 the title has been held by Om Shanti Om (2007), Ghajini (2008), 3 Idiots (2009), and last year's Enthiran/Robot took the title in 2010.  Now we're about to see what happens when the director of Enthiran remakes 3 Idiots in Tamil, Nanban.  There is HUGE box office potential for this film, and, like anything Shankar makes, it actually looks like it could be a lot of fun!

3 Idiots was a star vehicle for Aamir Khan.  In the film, the 40-something Khan played a college student on a quest with a couple of buddies.  If one can look past the improbability of mistaking Aamir Khan for a college student, the film is actually really funny. The joyous vibe of that film seems to be very present in Shankar's version, so I'm kinda of excited to see it.

Nanban stars Vijay, who is a "mass" hero of the type that tends to appeal to more rural audiences.  Vijay recently opened his superhero/dance spectacular Velayudham over the Diwali holiday.  The film got very mediocre reviews, but managed to do decent business nonetheless.  However, with Shankar shepherding him through Nanban, I have faith that he can turn into a real actor, at least for a little while.  Also appearing in the film are Srikanth, recently seen in Dhada, Ileana D'Cruz, a hottie of the moment in South Indian film, and Raghava Lawrence, the director/star of recent Tamil hit, Kanchana (which looks set to be remade in Bollywood soon, but that's another story altogether).

The trailer pretty much speaks for itself.  Nanban looks like a lot of goofy, brightly colored fun, and I can't wait to check it out.  The film is currently scheduled to open during Pongal, or around January 15, 2012.