Shankar's NANBAN Theatrical Trailer Looks Like A Ton Of Fun! 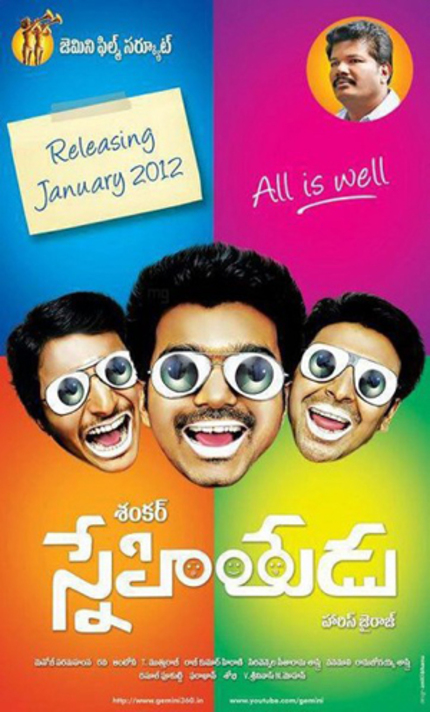 Typically, Indian comedies don't really turn my crank.  However, when they are coming from the most visually stylized director in the country, my attention piques.

Last week we shared the first teaser for Nanban, and now there's a full theatrical trailer.  This trailer expands in all the right places to get me excited for this Tamil remake of the incredibly globally popular Bollywood smash hit 3 Idiots.

Nanban is directed by Shankar, the man behind 2010's breakthrough Tamil festival hit, Enthiran/Robot starring Superstar Rajnikanth. On the surface, a comedy about three men maneuvering their way through college seems like a huge step backward into domesticity for Shankar, but after three minutes in his world, I'm sold!

Before Enthiran, Shankar directed the highest grossing Indian film of 2008, Sivaji.  That film was masterfully composed and executed and remains a personal favorite.  It also showcases his visual inventiveness even when the story doesn't include snake-robot-monsters or androids. Prior to that he directed Anniyan, which is the best supernatural/kung fu/multiple personality disorder/action/comedy/musical remake of Se7en you'll ever see. Anniyan also showed Shankar's visual flair in spades. Much of the core crew from Enthiran is coming back to Nanban including editor Anthony, and Academy Award winning sound editor Resul Pookutty (Slumdog Millionaire).

I'm really looking forward to this one now and sincerely hope they subtitle it in theaters because it looks like a blast!