(In English that means "Stories Which Only Exist When Remembered")

A few years back there was an article here on ScreenAnarchy about movies which were slow enough to put you to sleep yet were meditative rather than boring (a link to that article can be found in this here sentence).
Documentary filmmaker Julia Murat's first narrative feature "Histórias que Só Existem Quando Lembradas" certainly falls into this category as well: her film consists or long, slow takes, and often repeatedly cover the same set of events day after day.

But instead of making its audience impatient and restless, "Histórias..." manages the opposite. The film has a calming, soothing effect and grows into its own intriguing, beautiful thing. In the end this turned out to be one of my favorites of this year's festival so far. So what is it about? Read on!

In a small dilapidated village up in the Brazilian mountains, time seems to stand still. No trains visit anymore and there is no road. The few old-aged people still living there go through their daily routine, each providing their part necessary to the survival of the town.

But then, a visitor walks in from the railroad: Rita, a young student who photographs the ghost towns. Cautious at first, the residents slowly warm towards her and are intrigued by her cameras. But as she investigates the village further, Rita discovers that the cemetery is locked and that nobody seems to have died since 1976...

Falling asleep is always a danger when attending a festival and watching three, four, five films a day. Nodding off has happened to me a few times already, however not during "Histórias que Só Existem Quando Lembradas". Which is weird, because this is by far the slowest film I've seen so far and if I'd have to describe its effect in one word it would be that it "lulls" you. 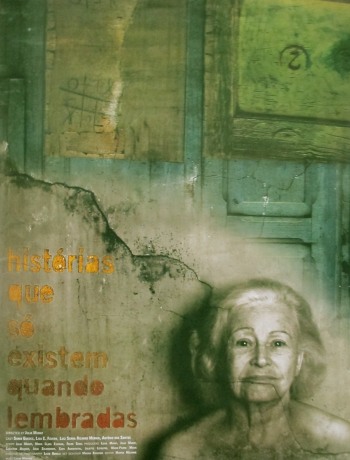 After the first few minutes I feared I wouldn't be able to reach the end but that changed after the first conversation in the narrative. The old people of the village are quite the characters, and their endless routine contains lots of good-humored acidic bickering. Spotting the small differences between the days, and especially the effect Rita creates as if she is a stone thrown in a quiet pond, is a treat.

What helps is that so much of the film is done so well: it looks beautiful, with each shot composed like a painting. Music is sparse, with the film relying mostly on the ambient sound of the jungle surrounding the village, but when Lucas Marcier's score does show up it is wonderful. I've caught myself revisiting it whenever using the IFFR press-videobooths, sneaking another look (and listen) at the end credits where the music is most prevalent.
The mostly septuagenarian cast is made up from a mix of professional actors and locals, but all look as if they've been part of this backdrop for decades. The long-exposure pictures taken with Rita's collection of Cameras Obscura (large tin drums with a tiny hole, without a lens) make everything look ghostly in a non-threatening way, people and buildings alike.
And its 98 minutes fly by like a breeze. A warm, summer breeze. Kudos to Julia Murat and her crew for transporting me to this place.

"Histórias..." is like a walk, taken to get some rest. Beautifully shot and beautifully scored, its languid pace only makes you like the cast more and helps create a fairytale-like atmosphere without seeming fake. It's a take on mortality and immortality which is small in scale but big in heart, and the Rotterdam audience rewarded it with a solid 4.0 out of 5. I liked it a lot and this film is hereby much recommended!