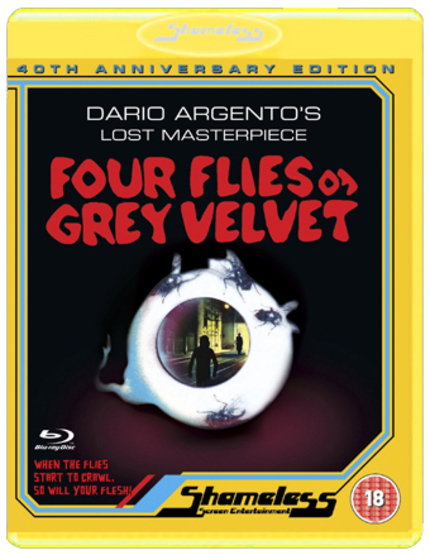 [Many people, including myself, have been dying to find out if this release would be region free, and word has come down from mission control at Cult Labs (link below) that Four Flies on Grey Velvet WILL be an ALL REGION disc! Get yer wallets out, people!]

Several months ago we shared the announcement from Shameless Screen Entertainment that Dario Argento's long unavailable Four Flies on Grey Velvet was coming to Blu-ray and DVD.  Today's announcement gives more details on that release, including some very welcome news regarding some of the films rarer footage.  It seems that about 40 seconds of the film has been missing from various versions of the film, but Shameless have acquired this footage and are going to be including it in this version.  The footage in question is not in the best shape, so it is in SD, but it will be available either via seamless branching or separately.  This is awesome stuff.  The extras also sound pretty great, including exclusive interviews and the original English audio for the film, which has been unavailable for a very long time.  Here are the details from Shameless:

Forty years after its release and twenty years after the film disappeared from the public eye, Shameless Screen Entertainment is releasing the first ever worldwide Blu-ray of Dario Argento's lost masterpiece, Four Flies On Grey Velvet and, also for the first time ever, in the original version in which it was made. This special 40th Anniversary Edition has been fully remastered in HD from the original negative and includes four inserts of previously missing footage known amongst Argento fans as the legendary "missing forty seconds". Additionally, the original pristine English audio has been remastered exclusively for this Shameless release from the original magnetic soundtrack and is being made available for the first time since the film's initial theatrical release in the 1970s.

Described by DVD Times as "essential viewing", this final installment in what is unofficially referred to as Argento's Animal Trilogy (following The Bird With The Crystal Plumage and The Cat O' Nine Tails) is a classic of the giallo genre, featuring music by Oscar-winning composer Ennio Morricone (The Untouchables; The Mission; The Good, The Bad And The Ugly) and starring Michael Brandon (Captain America: The First Avenger; Dempsey And Makepeace), Mimsy Farmer (The Black Cat; More), Jean-Pierre Marielle (Micmacs; The Da Vinci Code), Bud Spencer (They Call Me Trinity) and Francine Racette (Au Revoir Les Enfants; The Disappearance).

Going about his everyday life of band rehearsals and socialising with his wife, Nina (Farmer), and their hip friends, rock drummer Roberto Tobias (Brandon) notices he is constantly being followed by a strange man dressed in black. He decides to turn the tables on his stalker and follows him into an abandoned theatre, where a confrontation between the two ends with Roberto accidentally stabbing the man, who falls into the orchestra, apparently dead. Suddenly, a flash of light alerts Roberto to a figure in the upper wings of the theatre, where a mysterious person wearing a bizarre puppet mask and brandishing a camera has been taking photos of the fatal struggle. Roberto flees the scene, but the next day receives the dead man's ID card in the post. Naturally assuming it has been sent by the unknown witness, he becomes immediately concerned by the lack of any blackmail demands and is haunted by the question of what it is the masked figure wants from him. Roberto's fear and paranoia increase, and the mystery deepens, when his and Nina's housemaid is found murdered in a local park and it becomes apparent that an intruder has had access to their apartment.

Four Flies On Grey Velvet (cert. 15) will be released on Blu-ray and DVD by Shameless Screen Entertainment on 30th January 2012.

Already have this preo-rdered from the UK, along with DRIVE and TINKER TAILOR SOLDIER SPY, which are all released on the same day. Not seen this one before so very excited!