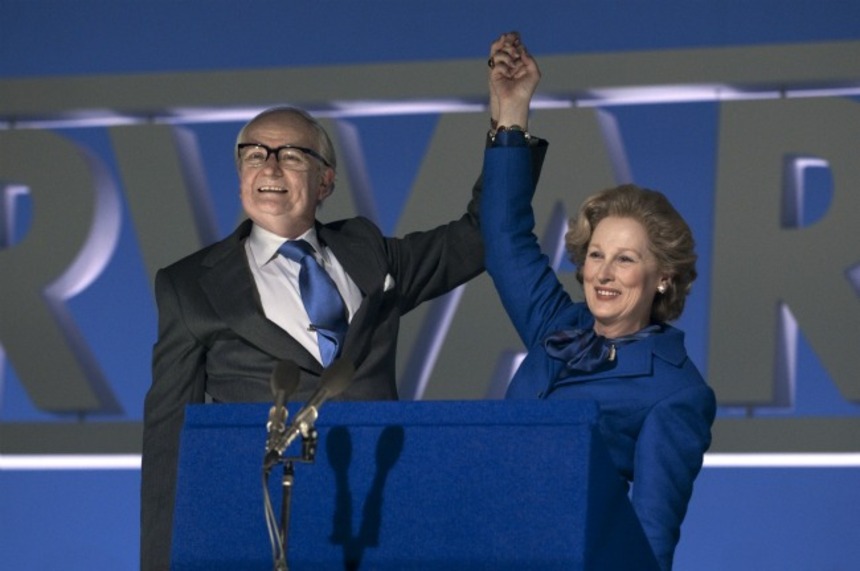 With the success in recent years of films like The Queen, Frost/Nixon, and The King's Speech, it's hard to fault those who greenlit this big screen portrait of former British PM Margaret Thatcher. You've got a dynamic, polarizing figure and built-in themes that would one expect to play well to today's audiences--economic unrest and the threat of terrorism, to name a couple. If you could just cast an actress of sufficient stature for the lead, you'd seem to be set in terms of depicting a colorful slice of history, one that would be sure to get audiences talking... and just maybe stir up some "Best Picture" Oscar buzz.

It's also difficult to fault The Iron Lady's screenwriter Abi Morgan and director Phyllida Lloyd for the way they've structured their film--in principle. Using its subject's present-day dementia as part of a memory-box device for making the past "come alive," their strategy both softens Thatcher to the point of being a sympathetic character and allows for an impressionistic, maybe even lyrical, presentation of historical events. It's an obvious approach in some ways, but also a solid one that you could confidently hang the rest of your drama upon.

The problem is, someone forgot to add that drama to the core of the movie.

As a consequence, in the title role the magnificent Meryl Streep often seems to be acting in some different film, one where there's both more cultural and emotional context for her various impassioned speeches. (Just how good is Streep here? Let me put it this way: in the contemporary scenes you forget that she's actually not an impressive eighty-something actress--her performance is that far removed from doing a "Get it? I'm old" impersonation à la Leo DiCaprio in J. Edgar.) As just one example of this narrative dislocation, Thatcher stands up to U.S. Secretary of State Al Haig by pointing out how she's regularly "done battle" throughout her life--but what could be a rousing moment is undercut by the sudden realization of, "Hey, I would have loved to have seen that movie--where is it playing?"

Yes, we witness Thatcher maintain a Jackie Robinson-like dignity when taunted by sexist remarks in Parliament, and she does lock horns with her husband (Jim Broadbent) for about thirty seconds over the distinction between "ambition" and "duty," but that's about it. To put it bluntly, for a movie with bombs going off here and there, and countless angry street mobs, there's a startling lack of conflict. Adding to the detached feel is a newsreel-esque recounting of key information--we're told that Thatcher was the first female head of any Western government, but there's no clue offered as to how she felt about this, or any indication that in the '60s and '70s there was a burgeoning women's movement that helped set the stage for her ascendency.

Similarly, events in her personal life often feel truncated, with way too much screen time devoted to the day-to-day symptoms of her mental decline. In one early scene she speaks with her future husband for the first time, then the next time we see them he's proposing, and the time after that is several years later, when they're experiencing marital discord. In short, to use the word "jumpy" would be an understatement: the narrative often seems to be leapfrogging over itself. The result is that rare movie that you wish was considerably longer and slower--at 100 minutes before the end credits, The Iron Lady could certainly have benefitted from an additional 20-30 minutes to flesh out its central storyline and to make its trips to yesteryear seem less like randomly appearing headings in a Wikipedia entry.

Sadly, what we're left with is the biopic as an exercise in free association, dissatisfying as both history and drama.

Do you feel this content is inappropriate or infringes upon your rights? Click here to report it, or see our DMCA policy.
Phyllida LloydAbi MorganMeryl StreepJim BroadbentSusan BrownAlice da CunhaBiographyDrama