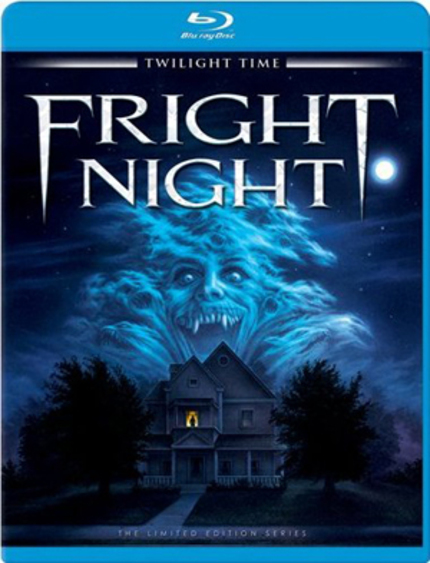 Tom Holland's Fright Night is one of the best studio horror flicks of the 1980's. The film is frightening, clever, and uses comedy in an interesting way without transforming into a parody. Unlike most films, though, Fright Night goes a little bit deeper into the psyche in a way that most of us probably missed when we first saw it.  Twilight Time will release their limited edition Blu-ray disc of Fright Night next Tuesday, December 13th, and it is probably given more care as a specialty item than it would as a big studio cash grab. The disc looks and sounds stellar, and belongs in your collection, that is, if you can get it before the limited run of 3,000 are gone.

Fright Night (1985), writer/director Tom Holland's homage to classic horror films, stars Chris Sarandon as the suave vampire next door and Roddy McDowall as the washed-up actor turned vampire killer who attempts to thwart the ambassador of evil's designs on a peaceful suburban enclave. This cult favorite features superb visual effects from a team headed by Richard Edlund (Ghostbusters) and Randall Cook (The Lord of the Rings), and is presented here with an isolated score track my composer Brad Fiedel.

I love Fright Night, and when I first mentioned on Twitter that it would be getting a Blu-ray release, the chorus of approval was loud.  It may not have spawned a series, or draw huge crowds in revival screenings, but I dare say it is one of the most popular films of the 1980's horror boom.  This is thanks to the entire team behind the film, who took what could have been a very average film and made it special.

The casting in Fright Night is as good a place to start when talking about its success as any.  William Ragsdale is Charley, the teenaged son of a single mother living next door to what he believes is a vampire responsible for a recent spate of murders in his small town. Chris Sarandon (Princess Bride, Nightmare Before Christmas) plays Jerry Dandridge, the vampire in question, and I'll be damned he isn't smooth as hell in this film. Charley's girlfriend Amy, played by Amanda Bearse (Married with Children) and the high school weirdo "Evil" Ed, played by Stephen Geoffreys, try desperately to convince Charley that he's crazy.  Ultimately, they enlist the help of local horror movie host and former film star Peter Vincent, played by the late Roddy McDowall (Planet of the Apes).  When Charley, Peter, and his pals discover that Jerry is a vampire after all, all Hell breaks loose.

Each of the actors manages to make their characters memorable, even with sometimes fairly little to work with.  Charley, as the protagonist, is almost the least memorable of the bunch, as his fretting and spasmodic shouting is less of a performance than a plot tool.  Peter Vincent is a take off on Peter Cushing/Vincent Price's on screen personae, though more Cushing than Price. Evil Ed? Well, he's one of the great horror figures of the '80s.  An unfortunate outcast lured by the prospect of acceptance into the hands of evil.

Then there are the effects.  Fright Night's practical effects were tackled by the artists behind films like Ghostbusters and Lord of the Rings.  There are some really great make-up effects in this film, including a werewolf/vampire wolf make-up that I'd completely forgotten about and really impressed me. Late in the film, Chris Sarandon's Jerry is also treated to some nasty vampire FX that are pretty damned scary.  In addition to these, the film also boasts a few optical effects which are pretty nice, and a welcome reminder of how clever films effects were before CG.

I love Fright Night.  It's scary, it's funny, it tackles some unusual material for a horror film, and it is entertaining above all.  There are subtextual clues to budding sexuality, as with most vampire features, as well as attempts to explore the dynamic of a single parent household, which was still a growing phenomenon in the '80s. There is so much to see and learn from this film that I think I'll probably watch it again very soon.

Twilight Time has released four Blu-ray discs so far, and I've now seen two of them, and they are both stellar.  Fright Night has been lovingly restored and transferred in this edition, to a state that is far beyond what attention it would have been given at its big studio home.  The image is pristine, the colors are awesome, and detail is immaculate.  This disc is every bit as good as Mysterious Island was, with the added advantage of not having to contend with so many in camera plate effects. I was, frankly, stunned by the sharpness of the image, but more so with the vivid color palette that is a huge leap from the ancient DVD image we're used to.  The DTS-HD MA 5.1 audio track is a winner also.  Fright Night was shot in Dolby stereo, but Twilight Time have released this new edition with a lossless audio track remixed to all 6 channels.  Most of the action is in the front, but there is some occasional use of the surround channels that is appropriate and effective.

As far as extras are concerned, most people would initially be disappointed as they don't look like much on paper, but I implore you to take a chance with them.  There are two theatrical trailers for the film included as video extras, but the real winner is Julie Kirgo's essay.  Twilight Time has included an 8 page booklet with a 5 page essay from Kirgo that is clever, insightful, well-researched, and very interesting to read.  She attacks Fright Night's subtext in an interesting way, and sums up the film's themes very effectively.  This is quality writing, and I'll take a good insightful essay over some glossy EPK stuff any day of the week!

Twilight Time have proven in the span of only three releases that they are a force to be reckoned with.  The combination of great films, fantastic transfers, and limited numbers will make these discs collector's items very quickly.  I cannot recommend this disc enough!