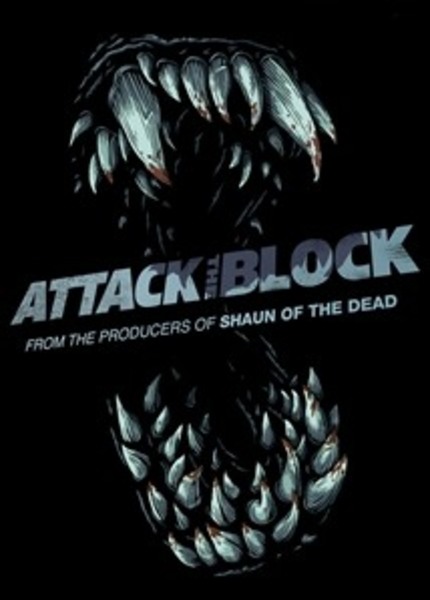 Truth lies in numbers, so here's my take on semi-cult hit Attack The Block. British genre films are doing quite well for themselves. After a series of successful horror flicks British genre cinema is now broadening its range to other nerd-friendly territories. Enter Attack The Block, a mix of comedy, action, horror and sci-fi, opposing a group of grimy London kids with an invasion of blood-thirsty aliens. The concept is quite flawless (in a fun-guaranteed way) and Cornish is skilled enough to make it all work.

While Attack The Block promotes itself as a film made by the producers of Shaun Of The Dead, the film is actually much closer related to recent French action/horror flick La Horde. Take a band of (semi-)criminals, lock them up in an apartment block and have them assaulted by a blood-lusting non-human species. Sure we're talking aliens instead of zombies here, but the difference isn't all that important really. Just another day at the office for the effect guys.

When everything is said and done Attack The Block is mostly defined by its setting. A young group of British slang-spewing Londoners living in the projects is what lifts this film above the rest of its peers. I admit to having a serious soft spot for the grimy slang of these youngsters so I was more than a little biased when watching this film, but it's just a lot more fun seeing this group of boys fight off evil in a storm of bloods, bruvs, fams and allows rather than being faced with the next group of ever-boozing and whoring American fodder.

The film starts when our little gang is disturbed by a nearby meteorite crash. An alien jumps out from the crashed meteorite and proves quite effective in disturbing one of their petty hold-ups. The gang is pissed and they decide to change the creature, eventually managing to corner it and kill it. What they didn't suspect is that they just killed one of the race's infants. When the parents arrive a little later they seem perfectly capable of tracking down the kids and have them pay for what they did.

Visually Cornish has everything under control. While not very extreme or meticulously stylized, the film looks attractive throughout. Cornish also deserves extra credit for the styling of the aliens. Even in full view they look cool, mysterious and convincing. It's the perfect example of smart and effective styling to keep the CG cost down and to maximize the intended effect, something that helps the film a great deal forward.

The soundtrack is a bit more generic and predictable, though the lack of high-energy grime tracks was actually a bit surprising considering the film's setting. A little disappointing too as I felt it could've added a bit more bang to the key moments of the film. The current score isn't bad, but it does feel somewhat underused and a tad too clean for its own good. Something Cornish should definitely work on in future projects.

The acting is all-around strong. The kids play their roles perfectly, forming a gang of annoying yet likable little pests. As for the secondary roles, Nick Frost has a pretty funny part that levels the action and sci-fi elements with a dose of enjoyable British humor. No-one is going to win any acting prizes with this film, but there's definitely some future talent amongst the young kids which will hopefully surface somewhere down the road.

Cornish is quite smart in the way he handles his film. Attack The Block combines some popular themes and genres, places them in a relatively new setting and makes sure that each part is adequately developed. The aliens look smart, the comedy elements are fun enough and the setting plays an appropriate part in establishing the film's own identity. It's an almost perfect genre mash-up that only lacks some balls and wits in order to become truly great.

As it stands though, Attack The Block is a highly enjoyable film that blasts by in no time. It's a quality production that will hopefully secure a follow-up project for Joe Cornish. If you're up for a blend of Critters and La Horde with a touch of Dizzee Rascal, you can't go wrong with this one. Recommended.
Tweet Post Submit