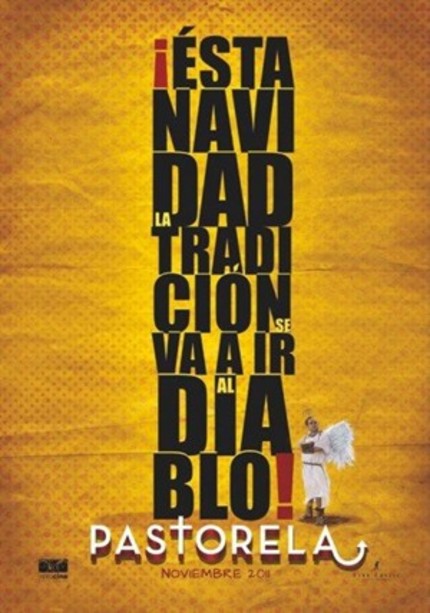 You would think that a lifetime spent as an exorcist would have prepared Father Mundo for everything, that someone who can bind the very spawn of Hell should be able to handle anything else with relative ease. You would be wrong.

You see, Father Mundo comes from a family of priests and when his uncle expires in the midst of some extra curricular play time with a parish nun his dying request is that Father Mundo take over his church. And so off he goes, the exorcist's life traded in for parish ministry and Father Mundo given specific instructions from the Bishop that he has to let his new flock know who's boss. Take charge. Make an impression. And given that the next major church event is the annual Christmas play - the Pastorela of the title - Mundo makes an impression by re-casting the entire play.

What he failed to take into account was Chucho.

A fearsome man, the leader of an elite police squad, Chucho loves the annual pastorela. He lives for it. He basks in the glow of playing the Devil - the most glamorous role in the entire affair. He's filled the part for years and has it down pat. He plans his vacation time around it. He's even made his own costume. And now the part has been given to his best friend instead. Chucho is Not Happy.

This will prove to be a problem for Father Mundo because in addition to playing The Devil, Chucho ... well, Chucho sort of is The Devil.

An irreverent comedy laced with action and horror elements, Pastorela is the second feature film from writer-director Emilio Portes. And Portes is clearly one to watch. A shockingly fresh voice in an industry prone to turning out ultra serious arthouse films, Portes fills his work with energy and style, gleefully tweaking the nose of the city and culture that he clearly loves. He's a sort of merry prankster, a happier and slightly more mainstream Mexican answer to Spain's Alex De Le Iglesia.

Pastorela is a film that delights in a good gag, both of the visual and spoken variety, and manages the difficult task of balancing disparate visual elements and styles with seeming ease. Helping greatly are his experienced and charismatic cast, particularly the menacing Joaquin Cosio as Chucho and Carlos Cobos as Father Mundo.

While Pastorela shows its limits here and there it is an enormously fun time from a hugely talented young director.

[Pastorela opens in limited release - with English subtitles - across the US on Friday.]

Do you feel this content is inappropriate or infringes upon your rights? Click here to report it, or see our DMCA policy.
Emilio PortesJoaquín CosioCarlos CobosEduardo EspañaErnesto YáñezComedyFantasy