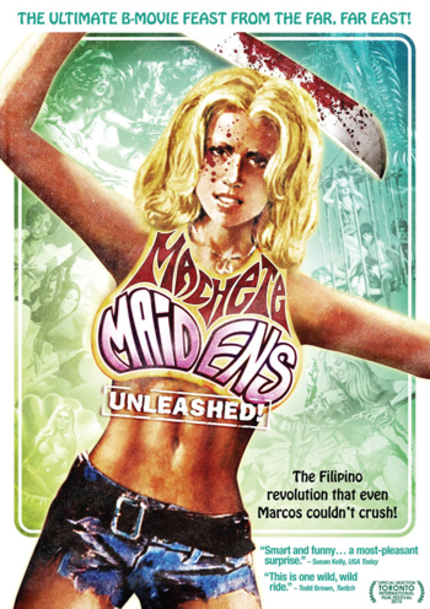 Director Mark Hartley's 2008 doc, Not Quite Hollywood, was a wild and exuberant ride, charting the unexpected rise of the Australian film industry as it embraced sex and violence in genre cinema. The pleasure of that doc was the candid series of talking head interviews along with the chance to discover quite a few Aussie films I'd never heard of in addition to a healthy dose of blood, bullets, and breasts.

His latest, Machete Maidens Unleashed! gives a similar treatment to the exploitation cinema that was shopped out of the Philippines back in the 70's under Roger Corman and other fast and cheap filmmakers looking to get away with as much sex and violence as possible for their onscreen efforts in an exotic locale without the pesky problems of health and safety and labor laws. Hartley assembles a staggering collection of filmmaking talent including Joe Dante, John Landis, and even Corman himself, along with the stars and starlets that got to go in front of the cameras and strip, fight, and shoot guns in small pictures for the big screen. It should be thrilling, live-wire stuff, but unfortunately, Machete Maidens lacks the one thing that Not Quite Hollywood had: a compelling arc, making it feel more like a snapshot than a story.

Instead, what we get here are a series of talking head pieces about various films shot in the country during the rule of dictator Ferdinand Marcos, with quite a few anecdotes by some of the aforementioned talent about the almost comically lax standards that allowed low budget Western filmmakers to come in and have pretty much carte blanche to shoot what they wanted, even as the regime was cracking down on anyone carrying so much as a pocketknife. What this meant, and what Hartley deftly points out through ample footage, is that numerous sexed-up tales of revolution were being shot at the same time and in the same place where Filipinos even suspected of having ant-government leanings were shot in the street. I thought this was a brilliant thread worth further explanation--why would Marcos turn a blind eye here--but regrettably, Hartley brings it up and then moves on.

Hartley does take a stab at the sexual exploitation of the actresses featured in the film, including starlets of movies like TNT Jackson, Firecracker, and The Big Bird Cage about what it meant to show their stuff and generally get knocked around on-camera. Most of the actresses--now in their 50's and 60's--seem to laugh off the work they did during the era, a couple of them even defending the work as acts of feminism. Not the films themselves, per se, but the simple reality of being female action leads in a period where that concept was hugely uncommon.

More than anything else, though, Machete Maidens stands as a document of the period of exploitation film driven by Roger Corman as witnessed by graduates of the "Roger Corman Film School." Some of the best parts of the doc feature directors like Landis, Dante, and Jonathan Demme detailing their time under Corman, and this is truly where the documentary's heart seems to lie. In interviews for the film, the former Corman proteges come off as boys who resent the old man while still carrying some affection for him. What I wouldn't give for a doc by Hartley charting these directors time under Corman's tutelage. As for the sly old fox himself, having reached the status of an elder statesman of film thanks to an honorary Oscar, he kind of rolls his eyes at the material he produced and distributed during this era, effectively wiping his hands of the movies featured here, although he never goes so far as to say the money wasn't good.

Hartley does very good work here, but Machete Maidens is disappointing because he did close-to-great work with Not Quite Hollywood, presenting what felt like a full picture of an era of film in that documentary. Here, over the hour and a half running time, it feels like we only get tantalizing bits and pieces of a larger story from one of the most electrifying periods of low-budget filmmaking in history. Still, I'd urge you to seek it out, simply to learn the bit that Hartley has documented here, and then for a good time, check out some of the low budget cheapies that the director lovingly documents here.