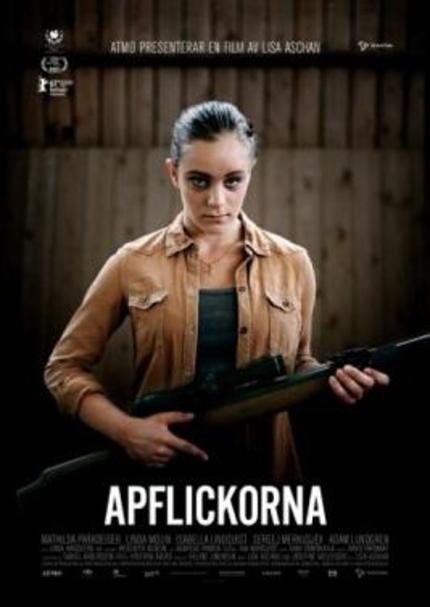 The problem with Swedish teen drama She Monkeys is there are two approaches artistic filmmakers seem to gravitate towards when they want to explore the subject of young and/or inexperienced people finding out about sex. Either they go gritty, intimate, cinema verite so they can get away with something a bit more graphic (and so acknowledge, without seeming prurient that yes, teenagers do tend to be interested in this kind of thing). Or they romanticise what's going on, reducing young lust to little more than hand-holding and puppy-eyed devotion.

The problem with She Monkeys is it's caught somewhere between these two stools. This is a film prepared to push the boundaries hard, and to be fair it does so with tact and sensitivity (as much as that probably sounds like a contradiction in terms). But it resorts to far too much clumsy, soft-focus symbolism, trite dialogue and grating contrivances - it wants you to be aware kids of all ages are aware of their sexuality, even if they're so young they don't really know what to do with it, but because that limits out of necessity the things the filmmakers can show they have to make do with crude metaphor, moody stares and platitudes.

The main couple are two girls on a small town voltige team; Emma (Mathilda Paradeiser), the new recruit who's desperate to impress and Cassandra (Linda Molin), the star performer who takes an instant shine to the new girl. Cassandra is the more forward of the pair, promising Emma private lessons which, while entirely platonic, seem to have a fairly obvious ulterior motive. But Emma doesn't seem quite sure what she wants out of their friendship, even when her indecision threatens to wreck the whole thing. At the same time Emma's younger sister Sara (Isabella Lindquist), perhaps conscious of a change in her sibling, makes clumsy advances on the cousin who comes round to babysit her.

Again, director Lisa Aschan does admittedly handle a very uncomfortable subject with a great deal of sensitivity. Emma is relatively easy material. The older girls' tentative overtures are sometimes unsettling, but more in that they can feel like a window onto something that's meant to be private, not that the censors should have got their knives out. Films do not typically credit girls as young as Sara with even a childish awareness of sexual attraction, though - there is nothing remotely gratuitous or malicious about the second plot thread, but anyone offended by Little Miss Sunshine pushing their buttons would most likely spontaneously combust at this.

Aschan obviously feels very strongly about the way the world treats young girls, the lessons they're expected to learn and the effect this can have on them. There's the gentle attraction between Emma and Cassandra, and the strenuous objectivity the director tries to bring to bear on Sara and her struggles to understand her own feelings - plus She Monkeys is just generally a calm, unhurried little story that refrains from passing judgement on its cast. The air of cool detachment hanging over the film means for a while, at least, it's interesting (if in a slightly shell-shocked way) to speculate where things might go.

But they don't go anywhere interesting, and worse, the detached approach seems to abandon any real attempt at establishing these young people as actual human beings. It doesn't feel like a good sign when we open on Emma's audition and only minutes later we're straight into her eyes meeting Cassandra's so longingly that, were they much older, you'd expect the teacher would be telling them to get a room. There's no attempt to ground Emma or her sister in any kind of normal life; the one wants to be a star at voltige, the other wants to marry her cousin, and neither completely understands what it is they're really after because they're not equipped to puzzle it out - oh, the humanity.

Everything is a metaphor, from what people say to the way they say it and where. Much of the dialogue was apparently improvised, and the pointless, awkward pauses certainly feel like someone's idea of what counts for edgy and challenging. You'd expect real teenagers to want to talk into the silence, or the cousin to do something to disabuse a child's half-formed fantasies, long before any of them actually do these things. She Monkeys feels like a terribly misguided attempt to shoot an arthouse flick like a kitchen sink drama, or perhaps vice versa - it's Beautiful Crazy without the male gaze and the shock tactics, and a good deal less interesting as a result.

The problem with She Monkeys is it isn't a teen romance, it's a polemic about how the world toys with girls' sense of identity and the harm this can do them. That's a good thing to talk about, but it doesn't make for a particularly compelling film - even the fluffiest Taiwanese lesbian movie typically has more realism, more pathos, for all these things are generally product aimed at teenage boys as much as girls who think they might be gay. Lisa Aschan could well be one to watch once she's tempered the desire to stand up for something, and worked out how better to combine it with actual coherent artistic expression, rather than getting up on a soapbox with some flash cards. For now, though, She Monkeys doesn't really merit a recommendation.

(She Monkeys was screened at the 25th Leeds International Film Festival, which ran from 3rd-20th November 2011.)