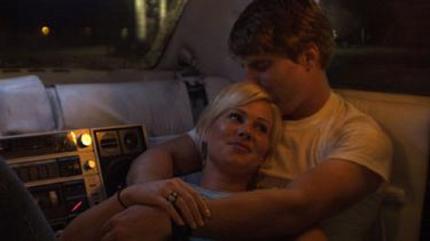 It's great when a director identifies with a film they've poured heart and soul into making, even more so when it's clearly pushed them to excel. Still, what are you supposed to think when it's a story about weak, contemptible people you'd want to stay the hell away from, yet whom the director seems to want to cheer on? Thus Evan Glodell's Bellflower - a bold, confident début feature, but one so relentlessly contrived, with all its cast either meathead lunks, conniving harpies or ineffectual drones, it's impossible to admire. At its best, Bellflower plays like a mumblecore film pumped up on steroids, a more cynical Fight Club poking fun at the self-delusion of unrepentant nerds. All too often, though, it comes across as The Room by way of Mad Max - bitches will stab you in the back the moment you open up to them, man, but male bonding and sweet, sweet pop-culture will always salve the wounds.

The bros at the centre of Bellflower are Woodrow (director Evan Glodell) and Aiden (Tyler Dawson), two affable dudes spending all their spare time working on customising a souped-up muscle car in homage to Mad Max, installing a host of extra features on the thing, even a fully-working flamethrower. They josh each other over how awesome it would be were the apocalypse to happen, like, tomorrow, so everyone would fall in line behind their intimidating deathmobile as it roared across the wasteland. Then one drunken night at a local bar Woodrow meets Milly (Jessie Wiseman) and falls for her, hard, enchanted by the idea of a girl who's just as devil-may-care as he'd like to be. Yet when this relationship runs into difficulties it threatens the bond between their circle of friends, to the point it seems even Aiden's support won't be enough to pull Woodrow out of the hole he's fallen into.

Bellflower is a boy-meets-girl film, basically, despite all the buzz about the end of civilisation surrounding it. If anything comes to an end it would be certain cast members' cherished convictions about how the world works, although that plot thread has its problems too. Regardless, Woodrow has his comfortable routine, then he's jolted out of it by a lady, and has to readjust his worldview accordingly. It's that process of readjustment that's the problem, basically. Glodell's script touts a bitter, antagonistic view of human relationships in general that's less artful misanthropy and more childish posturing, with little sense it's trying to convey acting entitled is in any way a bad thing. Indeed, there are moments it's downright nasty - The Room was self-important, preening and comically incompetent, but at least Tommy Wiseau didn't seem to want to physically hurt the women what done him wrong.

All of which is a shame, because Glodell and his crew unquestionably have talent. Bellflower strays very, very close to a weird hipster kitsch, with everything drenched in a heavy yellow filter and blown-out, acid-washed colour palette, but the director takes a fair stab at stretching rock video flash out to an hour and forty minutes. Even the intertitles at the chapter stops feel like an artistic statement of sorts rather than an attempt at gravitas that's undeserved; this is clearly a film that's Saying Something, or trying to. Glodell and his cast all put in considerable effort, too. None of the principals are particularly likeable, but there are moments of identifiable humanity to them, even when the story feels most like an idealised romantic (or revenge) fantasy. Virtually everyone in Bellflower is identified in terms of what they can do for Woodrow, even if they mean him harm, but they still seem to have a genuine inner life.

But whether he meant it that way or not, the crux of the film is Glodell's character gets to act as if the world came to a grinding halt just because someone treated him badly, following which either he hurts the people who hurt him or they hurt themselves trying to get him to snap out of it. There's simply no way you can sell this as positive - virtually nothing in Bellflower suggests these things are meant as a wake-up call, or an observation on how guys who felt the world owed them an apology would tear everything down within reach given the chance, or whatever other defence anyone might mount against the critics. There are mitigating factors, but too much of the running time (not least the rambling, enigmatic conclusion) feels like wish-fulfilment for assholes. The characters may have inner lives, but you don't see them doing anything with it except when it relates to Woodrow's suffering.

With just a little self-awareness Bellflower could have been so much more - as it is, even its moments of introspection seem as calculated as everything else, every minute of the narrative bent on getting to the closing credits and nothing else. You don't suspect for a moment that anyone will turn out to be anything other than they seem, or if you do Glodell squashes any doubt with a clanging lack of subtlety that leaves no room to manoeuvre. There's passion in the film, of a sort; you could see broken-hearted guys beered up on PBR fist-pounding over the climactic scenes, and the story's too ham-fisted (not to mention patently daft) to make it outright poisonous. But it's so childishly nihilistic it's difficult to applaud anything it does right. Slick, confident filmmaking, but frustratingly self-centred to the point of outright driving people away, Bellflower deserves a cautious recommendation at best.

(Bellflower was screened at the 25th Leeds International Film Festival, which ran from 3rd-20th November 2011.)