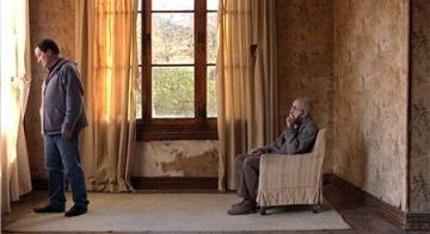 There've been any number of films where you hear a building is one of the main characters - usually horror - The Shining, the Amityville films - but it's typically a selling point more than anything else. José María de Orbe's Aita tries to make such a film where the house is actually the focus of attention, but disappointingly the result is more the cliched arthouse bore your average joe would imagine it to be, rather than some bold new means of creative expression. An attempt to convey something of the history of a crumbling Basque villa as custodians tend to it and ordinary people invade, Aita looks good, but all the delicate aesthetic touches going don't stop it ending up excruciatingly boring, a dull slog devoid of passion that provides no reason for anyone to care about it beyond the occasional pretty picture.

Workmen strive to keep the house from falling apart. People dig in the basement for dried-up human remains from decades past. Schoolchildren run up and downstairs on guided tours, and teenagers smash down locked doors in search of anything valuable they can purloin. There's no over-arching plot to Aita beyond the passage of time, and even that's not presented in any explicitly linear fashion - there's nothing to spell how much time has gone by between one scene and the next. We're simply encouraged to think about how all these different people view the house, and whether its history means anything to them. Very little of this carries any kind of value judgement; even the young people vandalising the building is presented more as something that happens, for all the pain it causes the people who look after the place.

The custodians do carry most of the film, however, with the majority of the dialogue and the sole ongoing plot thread, and the first problem is they're simply not that interesting. There's nothing wrong with asking your cast to step into the background, as it were, but it needs actors who can command the audience's attention the moment they appear and de Orbe's principals don't seem remotely capable of any such thing. The dialogue between the two men is little more than dull exposition clumsily fumbling with the conflict between caring for the building and letting the past stay dead and buried. We don't have any real feeling for who they are, how long they've been visiting and why - beyond simple common courtesy - they care about the place, let alone why we should. When the older man rages inwardly at the vandals' callous dismissal of a piece of living history it's touching, but not particularly compelling, as if we're awkward spectators to a stranger's grief and they just haven't noticed us yet.

The lack of any real story or narrative hook hurts any chance of engaging with the film, too. There's barely even any potential subject matter, nothing to wonder about beyond the idea of bones in the cellar, an empty attic room or an old man's private frustration. There's nothing wrong with getting your audience to think but it's hard to see what anyone could think about, here; for the most part the visuals don't suggest anything beyond half-formed memories and while in theory that's a worthy subject for discussion, in practice it's just tedious. The caretakers discuss the bones, the children run up and downstairs, the old man isn't getting any younger - it doesn't come off as subtle prompting, more laziness, as if de Orbe had found this awesome house but couldn't be bothered to do much more than wander around it with a camera for an hour and a half.

Admittedly there are brief moments of glory that hint at the original concept de Orbe must have been turning over in his head. As night falls clips of silent film get projected across the walls in the empty rooms, or above the old man's head while he sleeps - grainy newsreel or archive clips from the region that flicker, distort and collapse while lightning flashes outside. This might seem as pretentious as the rest of the movie, but it's the only time Aita feels truly magical - there's still nothing to tell us what we're watching, but these fragmentary images have a wistful, fractured grace, a soul that's sorely lacking in the rest of the the running time. One repeated image in this found footage ties in with something the caretakers talk about with a wordless, enigmatic feeling of pathos that almost makes up for the shortcomings in the rest of the running time.

Ultimately Aita feels like a missed opportunity, though - the final dedication suggests de Orbe sees the project as very personal, and it's obvious the director cares deeply about his silent lead. But his attachment is something way too insular for other people to find anything like as fulfilling, unless they come from the same background or share his particular interests. Whether you take Aita as a documentary, a narrative film or an art installation it still doesn't work - there's nothing in Aita which you could say instantly speaks to everyone, or piques your curiosity, or stimulates your imagination beyond arousing idle curiosity and a vague feeling of regret. There's empathy here, but no passion, nothing to stir you up beyond a camera wandering through an old, forgotten building, meaning in the end Aita can't really be recommended.