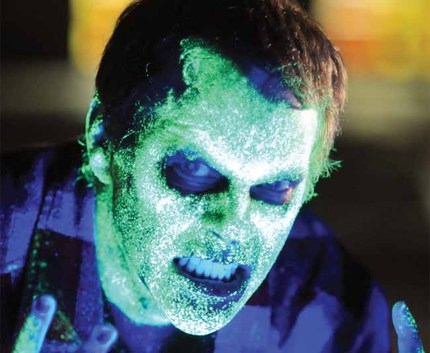 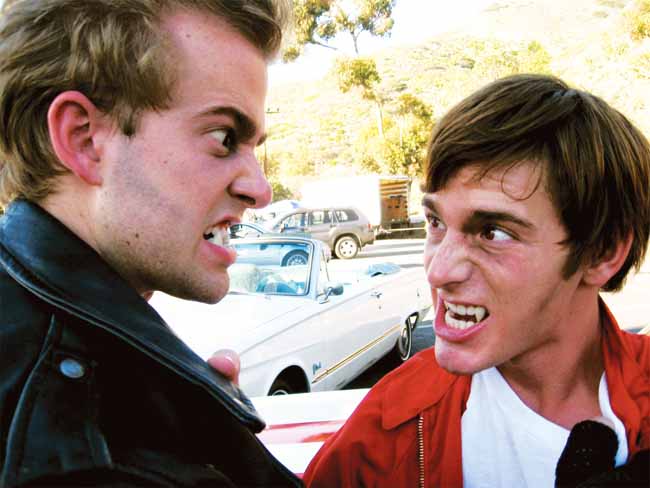 Today, the horror-comedy anthology Chillerama hits DVD and Blu-ray via Image Entertainment. Featuring mini features written and directed by indie horror filmmakers Tim Sullivan, Adam Rifkin, Adam Green, and Joe Lynch, the four-piece film has spent much of the last year touring the country with its creators in a sort of mini drive-in revival.

I caught up with Sullivan, who directed the "I Was a Teenage Werebear" segment, while he was at home in New Jersey getting ready for last week's Thanksgiving holiday--she was making holiday preparations while he was occupied working on a piece for his "Shock and Roll" column for Fear Net called "Anatomy of a Head Explosion" about blowing up a prop of his character Coach Thompson from his segment of Chillerama called "I Was a Teenage Werebear."

ScreenAnarchy: So what has the response been like for the movie? Are you guys pretty satisfied with audience reactions to it?

Tim Sullivan: Well, it's been incredible. Chillerama was created to be a tribute to the experience of going to monster movies. Me and Adam Rifkin--he grew up in Chicago, I grew up in New Jersey--we both saw the movies that inspired us at the drive-in. And, you know, the drive-ins, there are very few of them left, and a lot of places may not have even had drive-ins.

So we wanted to recreate that both in the movie but also in the promotion of Chillerama. Since--my god--since May, I've been on the road with this film. First, I hit all of the gay film festivals with my segment, "Werebears," and then from July until just this week, we've been on the road with Chillerama, hitting drive-ins and midnight movies. So we've seen the response and it's just been fantastic. People have six packs, a couple of beers, and we show it at midnight and people are just howling and screaming and laughing at the screen and just going nuts.

Now what's kind of cool about it is since there's four different stories it's like a variety show, so some people aren't into dancing werewolves, then they can go to the bathroom, get some popcorn, [or] get another beer and come back for the flying poop. And if they're not into flying poop, well then they can go take a break.

ScreenAnarchy: Why did you guys go all-out for the drive-ins? Why do you think they're still essential?

Sullivan: Well first of all, once upon a time in a galaxy far, far away, before the instant accessibility of everything via iPad, downloads and all that, when you're a horror fan, the drive-in was the only place you could see so many of these movies uncut and complete. [You] grow up reading about these movies in Famous Monsters magazine and then in the 80's in Fangoria, and you hear about all these great films and see photographs [and] maybe they'd show up at midnight on television but they'd be heavily edited, they'd be interrupted by commercials, prints were usually shitty.

And so the best thing about the drive-in is that they'd do these dusk-til-dawn shows so you'd get a new movie coming out like say The Incredible Melting Man or Carrie, but they'd put it on a triple bill so Carrie would come out, but you'd see it with The Devil Rides Out and Rosemary's Baby and it would just be all night long. You pay one price, you get a group of friends and just sit in a car.

The drive-in near me was great because I didn't have a car, I was 16 when I started going [and] you could ride your bike there, park your bike--this would be in the summer--and just sit on these benches and they'd have these outdoor speakers. So me and my friends, we would just get there as soon as the sun went down, we'd be there from eight o'clock at night until four in the morning watching horror movies. That was the only way we could see [them].

ScreenAnarchy: That kind of reminds me of this mini-rant David Lynch went on in a mock iPhone commercial about people experiencing movies in the wrong way on tiny screens all alone.

Also, I think we're at this time--I think that the technology is fantastic, I think it's amazing that we have this access and we can bark at an iPad, literally talk to it and say Chillerama and the next thing you know Chillerama comes up on IMDB on the screen. But people multitask, so they've got The Godfather on their iPad on one screen while they're texting on another screen, while they're listening to their iPod. And they're not really paying attention and they're like "Ohh, Jaws is boring!"

When you're in a movie theater and it's dark and you're kind of trapped and, contrary to what a lot of people do, you're not supposed to be texting, you're not supposed to be talking on your cell phone at a movie. You're supposed to be sitting there, respecting the filmmaker's vision that you paid to see and letting it wash over you. And if you give in to a film, it does its trick. If it's just something you're doing while you do 10 other things--you know, that's not why we make movies.

Especially the guys who make independent films where you're not making a lot of money. We don't do it because we're making Transformers 4 so we can buy five houses in the Bahamas, we're doing it because we really love this stuff, and it's important to us to tell these stories. And our reward is that they're viewed and enjoyed versus a Big Mac somebody buys on the way to something else.

And that's what's so sad to me, to see film--whether it's classic films or new films--just so disposable. And the importance of them just doesn't seem to be there like it used to be when you had to seek it out at a drive-in, or a VHS tape, or a 42nd Street grindhouse.

ScreenAnarchy: Do you think you guys will be able to go out on the road for whatever your next collaboration is?

Sullivan: We hope to make Chillerama an annual thing. Me and Adam Rifkin created this, and Adam Green and Joe worked with us on this one. We hope in future incarnations we'll have other directors working with us. And yeah, everywhere we went, they all said "Please come back next time." And we want to, and maybe that will even extend to some of our other projects.

I think it's really conducive. What I think is really cool is, let's be honest, if Chillerama, if that came out in a regular theatrical [release], where it came out in 3,000 theaters on a Friday, who's really going to be seeing Chillerama on a Tuesday afternoon in Beverly Hills? Nobody.

Horror movies, these are like Friday and Saturday night date movies. So it was such a better a idea to literally go to [drive-in] theaters on Friday and Saturday nights and go on the road with it. And also, by doing it over a four month period, people were aware of the movie for four months. And now the tour ends this weekend, and immediately the movie comes out on Blu-ray.

I think in today's market, something like that is a much better business model. A movie like Chillerama or some other horror films, whether it's Darren Bousman's 11-11-11 or Tucker and Dale, they can't compete with the Transformers, and the Pirates of the Caribbean, and the Avatars, they can't. But if we're clever about it, we can find our audience, can find our marketplace, and can be successful. 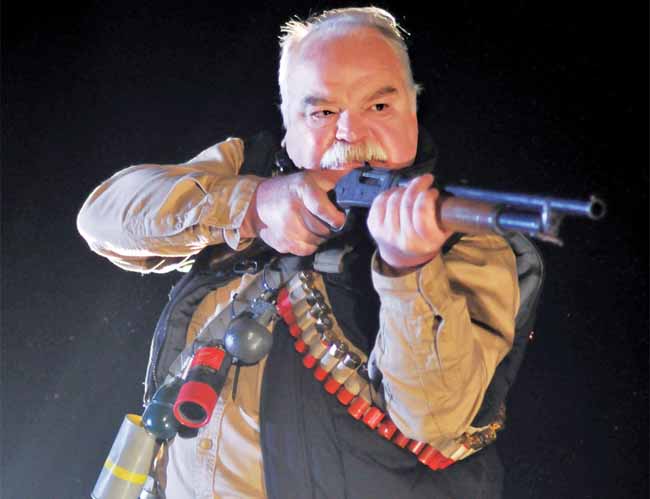 ScreenAnarchy: So in terms of actually making the movie itself, around two years ago when there was that mini faux-grindhouse revival with movies like Machete and Bitchslap, we had an ongoing conversation at ScreenAnarchy about that fine line between making a movie look old and ending up making it look shoddy. To what extent was this on your radar when you guys were making Chillerama?

Sullivan: You mean treating the film itself to look old?

Sullivan: Well, we're not setting out to make anything intentionally bad. What we're trying to do is satirize some of the low-budget filmmaking. I mean, in Adam Green's episode, "Anne Frankenstein," the film itself is meant to be like an old print and he plays with that. So there's scenes where the film jumps, you hear the sound popping, and the characters in the film actually acknowledge it so it's played for a joke.

And we're trying to show the low budget limitations of older films--one of the biggest laughs in "Anne Frankenstein" is when one of the Nazi soldiers gets thrown by Kane Hodder and we cut to an African American stunt double. We're having fun with that, we're not intentionally trying to make a bad movie.

In the case of Adam Green's and Adam Rifkin's segments, they chose to sort of distress the film, make it look like it had some scratches on it and stuff like that and that was really perfect for theirs. On "Werebears," we thought about it, but I decided I wanted it to look like a big Filmscope, Technicolor, teenage beach movie from the 60's like Roger Corman would make. So we decided that it looked so beautiful when we shot it, let's not distress it so that was my choice on "Werebears."

But we went retro with the poster, going for the illustration, the Jack Davis MAD Magazine/Tales From the Crypt-type art--we used the same guy that we used on Detroit Rock City for that. I do like the Hobo With a Shotgun poster where they put creases in it--I think that's fun.

But I don't think that anybody--they guys who make Machete, Grindhouse, Hobo With a Shotgun--I don't think anyone's trying to intentionally make a bad movie. I think they're just trying to recreate the experience of going to these types of movies. 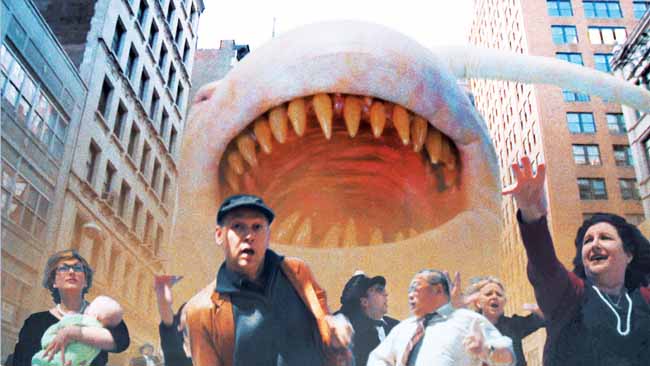 ScreenAnarchy: What else are you working on that we should be looking out for?

Sullivan: Well, I've got a couple of things. I was very pleased with the response from the horror crowd to "Werebears," which has a very gay theme. But what I've been finding is one of the subgenres of horror is what's called "queer fear," and that's horror stories that have queer content. And it's become such a big deal that in December, there's actually going to be the first queer fear horror convention in California called BentCon, and I've been asked to be a guest there. And soon, I'll be able to announce it, but I have a very cool queer fear project coming up.

On the flipside of things, as much as I love horror, I really love music and rock and roll having worked on Detroit Rock City, the KISS movie. So we just announced that Ray Manzarek of The Doors wrote this beautiful novel called The Poet In Exile that's sort of a fictional account of "What if Jim Morrison didn't die 40 years ago and reaches out now to Ray, his bandmate, to explain where he's been?" So, I optioned the rights for the book from Ray and I'm currently in the process of turning that into a film that I'd direct.

It's been crazy because I'm used to having to knock on doors to convince people to make my little, silly rock and roll werewolf movies, and now I've got UTA calling me saying "Harrison Ford wants to know if there's a script for The Poet In Exile," and I'm like "Really? Han Solo wants to play Jim Morrison. Wow, we'll get back to you on that." [laughs]