THE HOUSE BY THE CEMETERY Blu-ray Review 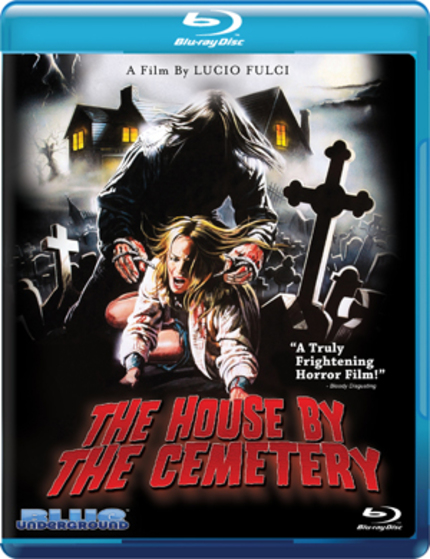 Before he moved into the ultra-gore films for which he's best known now, Lucio Fulci was on the giallo bandwagon, like many Italian filmmakers.  However, following the runaway success of his Romero rip-off, Zombi 2 (Zombie, Zombie Flesh Eaters, Etc...) in 1979, he turned to the grue as a way to earn a living. My fellow gorehounds and I thank him for that because we have some of the finest Italian horrors of the 1980's thanks to Fulci.  In 1981, Fulci decided to see if he could blend the gory horror film and the giallo, and the result was the deranged The House by the Cemetery, one of his best loved films. Bill Lustig has had his hands on this film for about 15 years now, first with Anchor Bay and now with Blue Underground, and has finally come up with a product in this Blu-ray that is worthy of the film.  The image and sound are better than ever before and there are abundant extras. This House has never looked so good!

Read The Fine Print... You May Have Just Mortgaged Your Life!

A young family moves from their cramped New York City apartment to a spacious new home in New England. But this is no ordinary house in the country: the previous owner was the deranged Dr. Freudstein, whose monstrous human experiments have left a legacy of bloody mayhem. Now, someone - or something - is alive in the basement, and home sweet home is about to become a horrific hell on earth.

If there's one thing that Fulci never let get in the way of his films, it's logic. He loved twisting the reality of his films in a way that leaves he audience disoriented and bewildered. The House By The Cemetery is among the first of his films that truly throw logic out the window, following the nightmare logic masterpieces City of the Living Dead (The Gates of Hell) and The Beyond (Seven Doors of Death). In those two films, it is easy to abandon logic because the films are based upon a fantasy in which the undead are taking over the world.  In The House by the Cemetery, the nightmare logic and twisting of reality, mainly via a child who may or may not be hallucinating an imaginary friend who warns him about his haunted house, is a bit harder to swallow.

Normally, this would throw me completely out of the film, but Fulci so completely abandons reality, that it works and we buy it.  The performances, particularly that of Catriona MacColl and the boy playing her son, are so over the top, that the melodrama almost overpowers the gaps in logical storytelling. I was so enthralled by Catriona MacColl's on-screen hamming and Paolo Malco's unending bad decision making, that I totally forgot to attempt to figure out what was going on and why.  It actually improved the experience quite a bit, not that it was ever boring, which is something of which Fulci's films are rarely accused.

The House by the Cemetery is generally regarded as second tier Fulci, but there is a lot to like about this fantastic little haunted house/giallo/zombie/gore/supernatural/mad scientist film.  It is gleefully gory and features creepy kids in wildly inappropriate situations. It has a mad scientist. It has a family breaking every single horror movie rule in the book, and it does all of these these things knowingly, and with forethought into what will make the audience react. In short, the film is made for a crowd, which is how all movies should be seen, ideally. If you've never seen The House by the Cemetery and you're a fan of Italian genre film, do yourself a favor and seek it out, this Blu-ray is most definitely the best way to go.

While Blue Underground has undoubtedly delivered the best home video presentation of The House by the Cemetery to date, the disc is not above criticism. When compared to previous home video editions, the Blu-ray improves in all of the major categories.  The image is cleaner, with very little noticeable damage, the colors seem more accurate, the contrast improves dramatically, and there is a level of detail never before seen on home video.  However, there is a tiny bit of the digital noise that has been spotted on several Italian Blu-ray releases recently.  The worst case so far has been Arrow Video's Blu-ray of Tenebre, which was unfortunately riddled with video noise.  The House by the Cemetery's issue is nowhere near that debacle, but it is a similar problem. Honestly, if I weren't intentionally looking at the disc critically, it wouldn't have bothered me, and for future viewings, I'll surely be able to look past it, but it is there, even though it is very faint. The sound, on the other hand, is impeccable.  Blue Underground have provided a DTS-HD MA 2.0 track in English that is clear and crisp, preserving each of the little boy's ridiculous exclamations for posterity.  The Dolby 2.0 Italian track doesn't fare so well, however, and seems a bit muddled, and altogether significantly inferior to the English track.

The extras on this disc seem exhaustive at first glance, and for a second tier Fulci film like this, I don't think we've ever seen quite the wealth of extras that are available here.  There are interviews with each main cast member, all newly filmed and in HD. There are also interviews with several of the living crew members on this film, including screenwriter and frequent Fulci collaborator, Dardano Sacchetti and his co-writer Elisa Briganti, cinematographer Sergio Salvati, FX artists Giannetto De Rossi and Maurizio Trani, etc, etc. All of these interviews are newly shot for this disc, and look great.  They were created by Mike Felsher's Red Shirt Pictures, who have worked on some of the best bonus material recently seen on horror Blu-rays these days. The production value and editing are a cut above the stuff you're probably used to seeing on bonus features.  They and High Rising Productions in the UK are the best in the biz right now when it comes to home video extras.

In addition to the new extras, Blue Underground have included archival stuff like deleted scenes and trailers to round out this package.

While The House by the Cemetery isn't perfect, it is pretty damned good. I don't see anyone outdoing this on Blu-ray anytime soon, so buy with confidence!

The House by the Cemetery

Order The House by the Cemetery on Blu-ray at Amazon

More about The House by the Cemetery