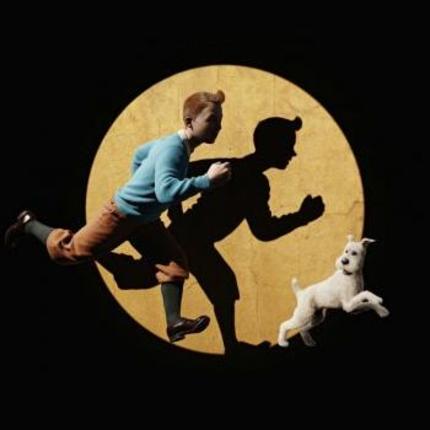 (Nanana-nana-na, we got the new Spielberg two months earlier than the USA!)

For avid fans of Steven Spielberg and/or Peter Jackson, it pays to be on the East side of the Atlantic right now as their newest film just premiered there: "The Adventures of Tintin". It is already a remarkable film for being director Steven Spielberg's first fully animated feature (albeit cgi through motion-capturing), and therefore my curiosity was raised even though the preliminary artwork didn't really appeal much to me.

For such a costly production the name recognition of its licensed property is actually rather limited outside of its home continent of Europe. Then again, advance word-of-mouth was already pretty good so the plan is probably to have that grow in the next two months to epic proportions on the Internet, and hopefully create a market-pull Stateside. For that plan to work the movie itself needs to be a pretty damn awesome crowdpleaser though...

So is it a crowdpleaser? Yes, and a good one at that. Is it awesome? Well... parts of it are. Let me elaborate. But first...

To say that I grew up with Tintin is an understatement. In Europe he was the most popular comic book character in the Seventies and the Eighties, having grown already to be part of people's general cultural background in the Fifties and Sixties. Even outside of the comic-book world he was everywhere. Advertisements used recognizable frames, politicians happily posed as characters and every company wanted to have a tie-in.
Within the comic-book industry Tintin's influence was even stronger, bordering on religion even. Hergé's unique style of combining realistic surroundings with stylized, abstract faces had followers, fanatic followers and devotees. Of course a counterculture existed as well which denied, defied or trampled on anything remotely Tintin-ish. Like him or not, Tintin was everywhere. So did I grew up with him? Hell, he was impossible to escape from! Not that I minded as I was a big fan. Not the biggest, but pretty big. 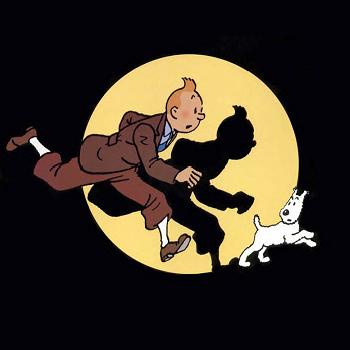 The reasons for Tintin's extraordinary popularity were plenty. The stories were simple adventures, understandable for everyone regardless of age or culture. They were like general templates on storytelling boiled down to the very essence, and have been endlessly used as such by comic-book writers ever since. Yet in Tintin's case the stories were not irritating clichés because they were embellished with rich characters and often featured impeccable technical details.
A second big reason was that unlike other comic-books, Tintin was considered to be a wholesome series by adults. Its very wide-spreadedness worked to its own advantage as grandparents, parents and children all knew what to expect from Tintin. He taught us kids to be good, work hard, and be helpful. The perfect boyscout. And if the circumstances asked for it, he taught us to be smart. If circumstances asked harder, to fight. In short: the Tintin books contained a message agreeable to parents who were raising kids, which was good news for us kids because it meant we were allowed to read them.
Finally, during his adventures Tintin would travel across the globe to many an exotic location, often adding an educational slant to the stories. Tintin would hunt for treasure, help governments from being overthrown (or help with the overthrowing), rescue friends, or in one glorious, GLORIOUS adventure, travel to the moon and back. Historical puzzles, tropical expeditions, action drama and sometimes even a dash of science fiction, Tintin encountered it all.

With Tintin having been this popular for so long already, the current film by Spielberg is not the first adaptation by far. Several live-action Tintin films were made in the early sixties, and in the seventies there was a hugely popular animated series on television which covered most of the graphic novels.
After Steven Spielberg had made "Raiders of the Lost Ark", he and Tintin creator Hergé publicly proclaimed they were fans of each other's work, with Spielberg even buying the movie rights to the Tintin franchise in the mid-eighties. Ever since then there have been talks about a Tintin film by him but now, more than 25 years later, we finally can go watch it.

A young journalist called Tintin buys an old model of a boat called "The Unicorn", but he is soon chased by people trying to steal the little ship from him. When Tintin investigates the model he discovers clues to the possible whereabouts of an enormous treasure. But there are more model boats, more clues, and a perpetually drunk captain who are all needed to solve this riddle.

When Tintin is kidnapped by thugs who try to find out what he has discovered it is the start of a grand voyage, a race across the globe to find the treasure before it falls into evil hands... 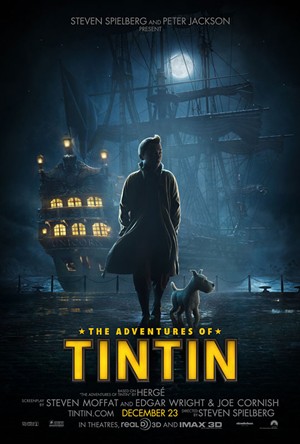 Both Steven Spielberg and Peter Jackson have stated over and over again that they are huge Tintin fans, and so have the three writers of the script. By the way, those three writers happen to be Steven Moffat, Edgar Wright and Joe Cornish, each of them quite successful themselves in the genre field as either director or producer. In fact, these five names together form a dream team of sorts, and their love of the source material is evident from the very first moment of "The Adventures of Tintin" onward. The opening credits animation is a veritable treasure trove of homages to the graphic novels, with many key items or famous scenes making their acquaintance.
And it doesn't stop there: the narrative starts with an artist on a market square, sketching Tintin's portrait. The artist is the spitting image of Hergé and indeed his drawings are the original comic-book art. The entire film is chock full of jokes like these, some flashy, some subtle. Many of them are funny but I do wonder about the mileage if you are a complete Tintin newbie.

It does show that the creative team's heart is in the right place though, and this benign intent visibly continues in the meticulously recreated world of Tintin. Indeed, the story is a very good adaptation of one of the original graphic novels, with bits of that novel's sequel thrown in and some added embellishments. These additions have all been added intelligently and actually make sense cinematically. It makes "The Adventures of Tintin" a roaring yarn like they used to make when I was little, only done on a larger scale with better technology.

Speaking of that technology, this film is 100% cgi animation, making use of motion captured performances by lead actors Jamie Bell and Andy Serkis (who by now must surely be the King of Motion Capture Acting). The advantages are that this method allows for characters which look far more cartoonish than make-up could possibly achieve, but the disadvantage is that the acting does not entirely come through. I do not know if this is a fixable issue or inherent to the technology, but it is the film's biggest Achilles' Heel: sometimes facial expressions are spot-on, sometimes they accelerate into Kabuki overacting and sometimes they degenerate into wooden linereading. The point has not yet been reached where the acting comes through fully consistent in quality. We're almost there, but not quite. And that is a shame because it takes a bit of an edge off a film which is in nearly all other respects a damn fine piece of entertainment.

Another slight problem is with the sense of humor. Hergé used plenty of slapstick jokes in his graphic novels, but even when I was little me and my friends would consider this "childish" and "old". Needless to say, by staying close to the source material the audience gets treated to many of these jokes again in "The Adventures of Tintin", and well... if these were dated thirty-five years ago already you can imagine how fresh they feel now.

But for every niggle I can think of I remember more things that I actually liked a lot. Spielberg is swerving his 3D camera around in the first half of the film like a teenager on sugar, and this becomes annoying during the quieter scenes where it gets intrusively flashy at times. Yet in the second half there are some impossible shots which are incredibly bold and ambitious, and there are a few action scenes which truly deliver the thrills. There is always a sense of place, where you know where everyone is, where they want to go and why they are shooting at each other. And it's been a while since I've seen that done this well. Watching the film in a big-ass 3D IMAX is a definite perk in this regard.

While "The Adventures of Tintin" is by no means perfect I had a lot of fun with it, and I strongly suspect I would have been ecstatic if I still had been ten years old. It is a fine piece of matinée entertainment and I definitely would not mind seeing this turn into a successful franchise with several more episodes. 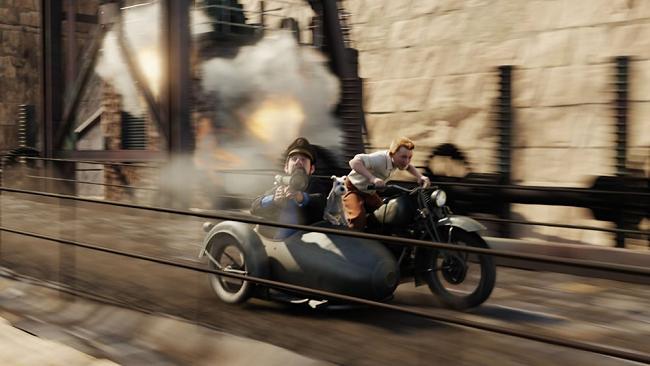 Do you feel this content is inappropriate or infringes upon your rights? Click here to report it, or see our DMCA policy.
Jacques ExertierEwan BaileyJames BarriscaleMark BazeleyAntony ByrneAdventure

More about The Adventures Of Tintin: Secret of the Unicorn

It's sounding promising. I haven't heard any word on Pegg and Frost as the bumbling detectives, did they not get much screen-time? If so, that seems a shame.

They do get screentime but they are very much two supporting characters. And you can hear it's Simon and Nick (if you listen closely) but they are not getting the chance to really be themselves, the wise-asses we like them for. They are just playing two stupid guys and most of their humor is based on slapstick, which is all cgi anyway.