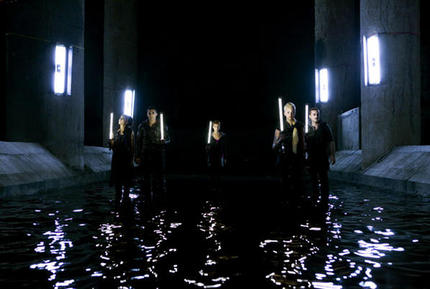 Sara is a very pretty, but very lost and confused teenager. As with many of her age, she has trouble relating to her parents; her mother tries and fails to talk to Sara, and Sara's father is increasingly absent. Sara is not doing well in school, and has become obsessed with graffiti art by a Banksy-type unknown. She feels much like Don Quixote, able to see the dangers that no one else notices. Confused and feeling very alone, Sara takes her own life. But she finds herself in a strange, dark world whose in habitants take her under their wing and will try to convince her that life is, indeed, worth living. Thus begins Eduardo Chapero-Jackson's feature film debut, Verbo. It is a visually stunning piece that makes up for in its art direction and use of varying sets, music and video-game-style aesthetics what it lacks in solid dialogue.

Make no mistake, this is a film aimed at young people, who are more at home among their own kind that adults, and need the young, the beautiful, and the cool to understand them. Many of the stars of the film are television celebrities in Spain, and their inclusion guarantees not only an audience of the young, but that this audience will listen. The dialogue does leave a lot to be desired. Writing for younger audiences does not mean lowering your dialogue standards to oversimplified, cliched messages. Kids understand a lot more than we think. (And for the record, this is not a translation issue; I speak Spanish, and was not reliant on subtitles.) The actors, particularly the lead Alba Garcia, are solid group, and could have handled more sophisticated dialogue easily.

But it is the aesthetics of the film that make it far more enjoyable to watch than your average teen movie. This underworld, filled with teenagers who have also committed suicide and whose job it is to save people like Sara, is moved through with light sticks in giant, gothic corridors, skated through in animation to hip-hop music, and fought in what seem like the bowels of the earth. Considering that the producers of the film are behind such films as Pan's Labyrinth and The Orphanage, this is not surprising, but Chapero-Jackson (as he has proved with his short films) has a remarkable sense of visual and sonic development. Each space that Sara and her helpers move through is more challenging than the next, and more importantly, each space is a kind of manifestation of Sara's psyche, the places that she, as Don Quixote, would find her windmills and dragons to fight and conquer. Chapero-Jackson hits the nail on the head in presenting the dark corners of Sara's mind and heart, and allowing the character to dictate how she should fight her inner war. Like Don Quixote, these dangers are really only in her head, but Chapero-Jackson makes them manifest in fantastic and understandable ways.

No doubt the film will find an audience in Spain, and it could easily find an audience outside of Spain as well, if marketed to the right age group. In order to engage young minds, you need a film that keeps them interested, that looks at the world as they do, and has characters that are close to their own age and speak their language. While the film falters on that last point, Chapero-Jackson has proved that he is more than capable of making more feature-length films with his unique aesthetic vision.

Do you feel this content is inappropriate or infringes upon your rights? Click here to report it, or see our DMCA policy.
Eduardo Chapero-JacksonAlba GarcíaMiguel Ángel SilvestreVerónica EcheguiVíctor ClavijoAdventureFantasy