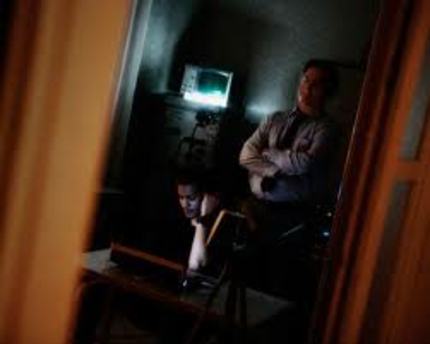 Certain tropes in film can be done to death, especially in genre film. Vampires, zombies, cannibalism after apocalypse, have all become so common that they are usually incredibly dull and/or highly unoriginal. This seems especially true of the found footage film. Too many screenwriters and directors think all you need for a found footage film is a camera, a scary place, and a few bumps and ghosts. Like any film, it needs a strong story and interesting characters. Thankfully, Emergo is a cut above the average found footage film, thanks to director Carles Torrens, and screenwriter Rodrigo Cortes (director of Buried).

Dr. Helzer and his team, Paul and Ellen, are asked to come to the apartment of the Whites (dad Alan, and children Caitlin and Benny) to investigate the possible presence of a ghost. The fact that there is something unexplainable going on is made clear early, leaving the rest of the film to discover the why. Set in such as small space, now overcrowded with the visitors and their equipment, tensions between an already tense family (the mother is recently deceased) run even higher. As the attacks (definitely not of the friendly variety) expand and escalate, the truth that emerges might be stranger than supernatural.

As stated, two things make this one of the better found footage films in a while. First, the use of the cameras. There are handheld, stationary, and security, and the use of each is quite deliberate to its given scene. For example, beyond practicality of viewing the entire space and both characters at once, we are meant to see an argument between father and daughter from a high angle, slightly rounded to add to a kind of distortion of their relationship. In another shot, a stationary camera shows Dr. Helzer and Alan sitting on a couch, but a electromagnetic reader blocks the view of Alan's face, as if waiting for him to set it off. A variety of camera types and angles also adds a variety necessary to keep the film from becoming stale. The small space also means there are few running shots, which can be very annoying in the found footage film. Torrens uses the tightness of the space to make the audience afraid not only of the possible poltergeist, but of the people as well. Fear and sympathy in conjunction make for greater tension.

Cortes' script concentrates as much on the human dynamic as the supernatural, which is to its advantage. Michael O'Keefe as Dr. Helzer anchors the piece; he remains calm at all times, and his dead-pan expression and barometer is tuned to the family. For him, the supernatural does not exist, and he quietly waits for the science to give him the answer. The film is tightly written; clocking in at around 80 minutes, not a moment is wasted on long, boring corridor shots or too much build up to make the moment of terror stale. As we are aware that there is something haunting this family, it becomes a matter of finding out its origin and its intentions.

It's very refreshing when a director and screenwriter combine to create a new take on a motif, and have the insight to (mostly) avoid regurgitation. Emergo is a refreshingly smart and well-controlled film, with its found footage technique being used to enhance the story, rather than being its crutch.

Do you feel this content is inappropriate or infringes upon your rights? Click here to report it, or see our DMCA policy.
Arya TariverdiLaurens BruningElaine KonkelaarFrederieke van VelzenMax BlaauwJoop De KeijzerThriller