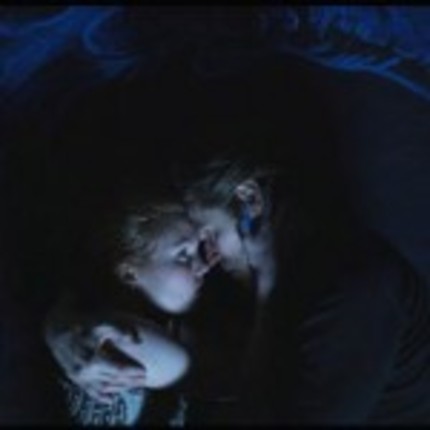 Abel Ferrera is not a director known for overly sensitive work; at least, not sensitivity in the conventional sense. Which is why 4:44 Last Day on Earth is something of a surprise. Like  Ferrera's past work, it delves into the theme of faith. But Ferrerra's main characters, Cisco and Skye, are extremely sympathetic characters, even when you disagree with them. As far as apocalypse films go, it has more in common with a film like Don McKellar's Last Night as oppose to any grandiose spectacle of extreme disaster. Not that the cause of the end of the world is not extreme. In this scenario, it turns out Al Gore and other environmentalists were right, and the ozone layer is about to burn off and set the world on fire. The film follows the protagonists through this last day, as they struggle with their past demons and the strangely calming inevitability of death.

When we first meet Cisco (Willem Dafoe) and Skye (Shanyn Leigh), they seem to be dealing with the apocalypse as one might expect those who have accepted this fate and chosen to spend the day wrapped in the love of each and friends. They talk; they make love; Cisco finds a recording of an old football game he attended as a child, and tells Skye about it; they meditate according to their Buddhist beliefs; they dance. Skye paints her last canvass, and Cisco tries to reach his daughter via Skype. Indeed, contemporary technology becomes an interesting metaphor in the film for the disconnection with reality, and the fact that since one can Skype at the end of the world, would it really be necessary to see your loved ones in person? A newsanchor announces that he and all station staff will be leaving before the end, and all that will be shown are live camera feeds from around the world. As the end tie grows closer, Cisco witnesses a suicide, and this seems to push him over an emotional edge.

Times such as the apocalypse (presumably) bring out the worst and best in people. Cisco's past issues with drug use make a reappearance, as does Skye's rage over Cisco's ex-wife. Dafoe plays Cisco as a man who only seems to have a perfect life on the surface; he loves Skye, but those demons come calling back fast and furious when he is pushed. The dialogue has an improvised feel, which is one of the film's strengths; the audience can imagine that this might be their home, their last moments with a loved, and imagine their own demons that might surface under such stress. Would last days make you see the truth of your life? Or would ignoring them be easier, as nothing can be done about it anymore?

This is quite an understated film, given that it is Ferrera and the end of the world. But that works in its favour, just enough information is given as to the nature of the disaster and its outcome, so the audience can concentrate on the flawed but compelling characters.

Do you feel this content is inappropriate or infringes upon your rights? Click here to report it, or see our DMCA policy.
Abel FerraraShanyn LeighWillem DafoeTony RedmanPat KiernanDramaFantasySci-Fi