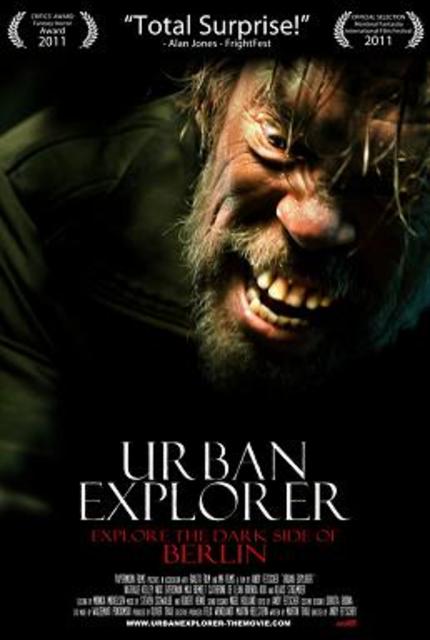 Do you like watching stupid people die? Not the cheeriest introduction, maybe, but it's hard to see what else anyone could get out of Andy Fetscher's Urban Explorer. Four young people go creeping through the tunnels under Berlin, only someone's waiting down there who's a little too happy to see them. Fetscher's film is technically sound, and when the gore starts in earnest it's skilfully done but the director does practically nothing to dispel the idea we're just marking time until these kids start begging for their lives. It's not merely the production-line approach of modern-day stalk and slash productions like something bankrolled by Platinum Dunes. There's an ugly, cynical streak to Urban Explorer that's not so much misanthropic as downright lazy, with great swathes of story seemingly missing, character development sidelined in favour of drawing out their suffering and a downbeat tone that's less nihilism and more a giggling child pulling the wings off a fly.

The plot jumps almost straight into the action, with Lucia, Denis, Marie and Juna signing up with veteran urbexer Kris, who promises them he can sneak them through Berlin's tunnel network to an ancient SS bunker sealed since the second world war. The four barely know each other, let alone their guide, but the lure of the old ruins proves too tempting. The initial descent is all looming shadows and the eerie silhouettes of rusted ironwork from the Cold War, but the trouble starts once an accident sees one of the group badly injured and unable to get back to the surface. When a mysterious vagrant pops up out of the darkness, he looks like the only hope the rest of them will be able to get help in time, but - probably not much of a surprise, this - it turns out their new friend has no interest in the party ever leaving the tunnels alive.

Admittedly there's a certain kind of horror film that thrives on stating the bleeding obvious, apologies for the pun, and to be fair to Fetscher and writer Martin Thau they do put considerable effort into this approach. Klaus Stiglmeier as the leering vagrant Armin throws himself into the role of lunatic, superhuman villain, and almost carries the plot (what little there is) by sheer force of will - you know the whole thing's painfully contrived but the guy's so intimidating, physically and mentally, it almost works. His glee at playing the hunter is so fierce it's almost palpable, and no matter how much of a cynic you are it's difficult not to squirm in fear every now and then. And Fetscher at least knows where to point a camera - real or not (shooting apparently did take place in Berlin) the tunnels are interesting enough anyone who's gone exploring abandoned buildings will wish the film spent more time there.

But Urban Explorer is just so wilfully, coldly mercenary it's impossible to imagine anyone but the most committed gorehounds ever getting any real enjoyment out of it. Thau's attempts at meta-commentary fall laughably flat ("Say, isn't it really stupid to descend under Berlin in the company of strangers with a man we don't even know without leaving any word of where we're going?" "Sure, but it'll be an adventure!") and things only get worse from there. Every plot beat seems hell-bent on painting the four as wide-eyed naifs for the sole purpose of ramping up their terror when it turns out the darkness has teeth, and while some directors could work rough magic with this (Tom Six had some success with the first The Human Centipede, for one) Fetscher and Thau don't seem to have a clue. These people aren't just stupid, they're colossally, unbelievably stupid, and it makes it all but impossible to believe in, let alone sympathise with them.

Worse, the film seems to glory in the way the cast wander around shrieking in fear until something bites their heads off. Giving most of the dialogue to Stiglmeier is a double-edged sword; he's far more talented than the young leads, but virtually every line he gets is the equivalent of a small child ceaselessly poking you in the back. You're stupid, aren't you? God, you're stupid. I'm going to enjoy the stupid look on your face when I kill you - what? No, I didn't say anything. You believed me? God, you're stupid. And on, and on, until you've rolled your eyes so much they're threatening to fall out of your head. Add to that the way the story skips at least one major event entirely just to throw in another ridiculous boo scare and the fact the big reveals are all visible a mile away, and the ending feels like clocking off at the end of a long shift rather than anything that'll end up haunting your dreams.

Urban Explorer is horror by numbers, in other words, only several of the numbers are in the wrong order. It's a demo reel for the effects technicians wrapped up in a tissue-thin plot no-one could possibly care about with a cast of cannon fodder who never become anything more than ciphers. There's occasional hints of something better in here, the pieces of a reasonably entertaining slice of B-movie splatter, and the nastiness is handled with a fairly impressive level of craft. But there's nothing else to this beyond crude emotional manipulation, childish shocks and ludicrous attempts at justifying them. There's no caring what goes on, ergo none of it ever becomes genuinely frightening. Even if you do just want to see stupid people die (not in real life. Please, not in real life) Urban Explorer is pretty much impossible to recommend.