Grimm Up North 2011: THE REVEREND review 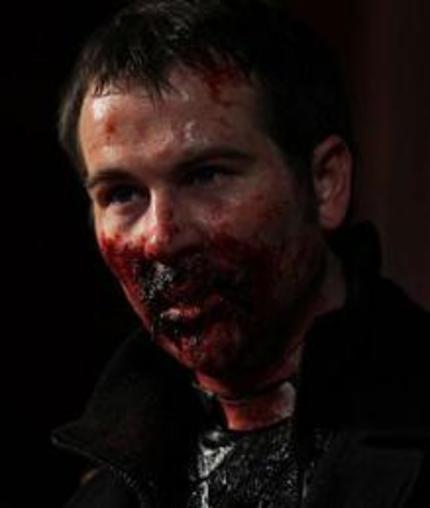 (PLEASE NOTE: The version of The Reverend that screened at Grimm Up North 2011 was a final edit that had only been completed several days before the festival started, and it is certainly possible director Neil Jones may choose to work on it further before it gets any kind of release outside the festival circuit. I believe his decision to let his film be shown in public is justification enough for me to criticise it as harshly as I'm about to do - just in his defense, do bear this in mind.)

A good way to sum up Neil Jones' woeful The Reverend is this: it's the kind of film that proudly sports 'Based on the graphic novel' in the credits, when the graphic novel doesn't exist yet [or didn't, at the time of the screening]. It's the kind of production that despite having pulled together the money, time and personnel you need to get a film finished at all, squanders all that effort in a fit of preoccupation with how awesome the whole thing's going to be. There's a priest who's tempted by the Devil, and turned into a vampire, and he has to resist using his powers for evil, or something, and there's gangsters and conspiracies and blood and nudity and never mind the damn thing barely makes any sense, is weighed down with shockingly awful dialogue, pacing and scripting and does virtually nothing with the idea of a servant of God struggling with the urge to kill whoever he feels deserves it, eh? Based on the graphic novel! You can practically see the action figures now. Or presumably Jones can.

The opening very briefly shows some promise - Gregory Widen's original The Prophecy showed you could mine some real pathos out of a pulpy, B-movie take on Christian symbolism and the sight of Rutger Hauer as the Great Satan (yes, really) as God and the Devil decide to battle for an innocent's soul suggests we might be in a similar ballpark. Sadly it's all (rapidly) downhill from there. Stuart Brennan plays the priest in question, newly assigned to minister to an idyllic country retreat when a svelte young thing appears out of a cold and rainy night to promptly sink her teeth into his neck. Rapidly developing a thirst for blood, preternatural resistance to bodily harm and superhuman strength - the usual suspects - when our hero discovers the village sits on the border of a crime-ridden parish overseen by Tamer Hassan's ruthlessly matey Mister Big, he decides maybe he ought to dispense some particularly Old Testament justice to the most deserving of the local criminal hard cases.

There's nothing wrong with any of this on paper, but Jones' execution is pretty much borderline inept from the moment Brennan appears on screen. This is the kind of film where, when Brennan wakes up the morning after, writhing in pain on the floor of his church, covered in blood with a bite missing from his neck there's a voiceover which explicitly, repeatedly states 'It hurt. I was in so much pain. It hurt so badly', or words to that effect. And it only gets worse. Virtually every line is mediocre, listless writing at best, and Jones can't seem to find the confidence to handle exposition as anything bar spoon-feeding the audience with the patently obvious. It's not as if the cast don't try - Brit horror stalwart Emily Booth does her best as a neighbourhood prostitute in need of saving, but the scene where she desperately tries to placate her pimp is so comically clichéd it could almost qualify as a spoof of mass-market police procedural TV (UK readers, think The Bill et al).

Try as you might to cut The Reverend some slack Jones seems determined to one-up himself - at times it's pretty much pathetic, as when the police decide to investigate after one of the criminals the hero dispatches turns out to have been an informant. The resulting dialogue is an embarrassment, the kind of childish, incoherent mess where it should have been obvious a re-write was necessary before the words had even hit the page. Tamer Hassan's coasting through his mockernee gangster comfort zone feels positively Shakespearean by way of comparison. And while the visuals don't immediately damn the film in quite the same way, Jones' direction is amateurish at best, repeatedly choosing poor angles, jarring cuts and drifting aimlessly from scene to scene. There's nothing that grabs your attention, beyond the primal triggers of blood or tits or hey, he punched that guy - all the key plot points blur into the next, each as unremarkable as Brennan walking down the road, or enjoying a nice cup of tea.

The thing is Jones plainly wants his film to be more than the next in a long line of straight-to-video low-budget genre features. If you didn't know he'd studied theology the sledgehammer emphasis on the parallels between The Reverend's story and the Bible's Book of Job would probably give you a fairly good idea this was the case. But the film does absolutely nothing with the conflict between Christian ideals of fellowship and forgiveness and the more practical approach of biting your enemy's throat out. Countless writers have toyed with Nietzschean themes of a hero who stoops so low to take revenge they fall over and struggle to get back up, but it's hard to believe Jones has a clue who any of them would be. There's no conflict here beyond a brief mention of the battle for the reverend's soul - he agonizes over drinking blood, decides to kill bad people, everyone affirms those sure were some bad people he killed, case closed.

On top of the laughably facile characterization, terrible dialogue and ham-fisted direction this doesn't really invite much leniency. Notorious production company The Asylum openly admit they make terrible, mercenary knockoffs, for example, but are clearly having too much fun (and making too much money) to care what any critic thinks so you laugh, wish them well and move on. When a movie aims that much higher, though, it makes it so much more obvious when the director isn't up to the task - Jones shows no sign he remotely understands the task he's set himself, and The Reverend seems that much more of a slap in the face as a result. You cannot throw around lofty philosophical and moral dilemmas and just hope the mere mention of these concepts is going to up your game - the only way your project will end up standing out from the competition is in how badly it fails. The Reverend is that rare beast, in other words, a terrible film that thinks it's onto a winner; if you want to see how terrible, then go right ahead, but everyone else should stay well away.

(The Reverend was screened as part of Manchester's horror film festival Grimm Up North 2011, which ran from 6th-9th October at the AMC cinema, Manchester, UK.)