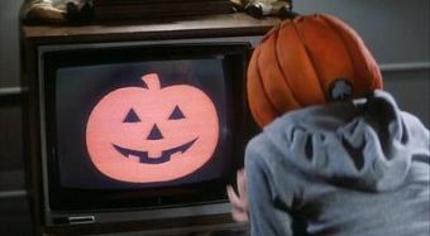 Halloween 3 seems bizarre enough in 2011 before you've even started watching. A Halloween with no Michael Myers, the masked killer who became the star of the first two films - the idea Hollywood would green-light a major franchise sequel that dispenses entirely with the series' most iconic character seems like the stuff of jaded internet critics' fevered dreams, or the kind of bold reinvention fanboys hope against hope they'll get, rather than another round of Rob Zombie killing off attractive teenagers with the help of life-size action figures. Unfortunately when director Tommy Lee Wallace tried to replace one of the most popular villains of the decade he came up with what has to rank as one of the strangest popcorn horror stories ever devised.

Season of the Witch is a piece of lunatic gibberish not unlike having a rejected episode of The Twilight Zone explained to you by someone tripping balls, to be blunt. It makes virtually no sense, proves (unintentionally) hysterically funny almost from start to finish, and could almost be offensive if it weren't so straight-faced. Unsurprisingly it flopped, and remains widely reviled by fans to this day - yet to be honest, much of this hate isn't exactly warranted. Wallace's film is ludicrous, and not in the least bit frightening but unlike certain canon instalments it's certainly never boring, and definitely worth seeing at least once.

The plot? Grizzled eighties character actor Tom Atkins plays Doctor Daniel Challis, a philandering alcoholic struggling to retain custody of his children after his marriage has folded. One night shortly before Halloween, an elderly patient is admitted to the ER screaming that mysterious assassins are after him. One of these implacable killers makes it inside, slaughters the old man, and as Challis gives chase the murderer calmly douses himself in petrol and goes up like a rocket in the hospital car park.

Then we get to the weird stuff; the good doctor meets the victim's daughter, Ellie Grimbridge (Stacy Nelkin) who says her father was a toy maker who had a contract with the Silver Shamrock company - a giant manufacturer with a company town a few miles away that's busy bombarding every TV channel going with commercials for their brand of Halloween masks. Ellie's determined to discover what her dad might have found out about the kindly CEO, Conal Cochran. It turns out the masks are the key component of a sinister plot involving magic, blood sacrifice, Stonehenge and enough casual xenophobia to set Irish-American relations back a few decades, if the whole thing weren't so insane.

Words simply can't fully encompass how all this unfolds, with both the ghoulish set-pieces and the character development (what little there is) pitched at a level of unrelenting pantomime silliness that has you convinced the cast are only moments away from collapsing with laughter. There's a (very) vague impression Nigel Kneale's original story might have been something more serious, but Wallace dispenses the gore - even in the edited versions - with a carnival glee so pronounced very few people could possibly find the violence too much.

Yet while the narrative could hardly be any hokier - the crude CG pumpkin under the titles just about sums it up - Wallace does at least seem to understand how daft things are getting. So, too, do the cast; Atkins and Nelkin in particular send their roles up for all they're worth. Ellie is an obvious type, admittedly, but Atkins makes Challis surprisingly appealing for all the doctor's so weak, and plainly doesn't mind ending up in bed with his co-star at all ("Where do you want to sleep, Doctor Challis?" "That's a dumb question, Miss Grimbridge").

Season of the Witch isn't remotely frightening, though the ending maybe carries a bit of a chill. But it's clearly not trying to be. Again, the film is a carnival attraction, a ghost train. Wallace's main fault isn't that his story is ridiculous, it's more he has no conception of when to apply the brakes - as with the love scenes, even the quiet passages are the kind of full-throttle, stiff upper lipped nonsense to send the audience into a fit of the giggles. (Witness Silver Shamrock's model salesman and his family, invited on a special tour of the factory where anyone can see a mile off that it'll all end in terror.)

Yet like a good ghost train, Halloween 3 is rarely boring. It's comically demented, though not ultimately, in a good sense; Wallace knows his story's dumb, but not how dumb. Still, it's inventive, it's flamboyant and it does continually manage to outdo itself - for all its classic status, viewed with a cynical eye the original Halloween is simply a parade of stupid people meeting their deaths in much the same way at the hands of a silent, invulnerable colossus devoid of any character. In contrast, Season of the Witch is never less than fun and its desire to entertain is oddly gratifying, for all it's not remotely a good film. Lunatic gibberish it may be, but Halloween 3 is still quite a ride, and as such deserves a cautious recommendation.

(Halloween 3: Season of the Witch was screened as part of Manchester's horror film festival Grimm Up North 2011, which ran from 6th-9th October at the AMC cinema, Manchester, UK.)

Do you feel this content is inappropriate or infringes upon your rights? Click here to report it, or see our DMCA policy.
Tommy Lee WallaceTom AtkinsStacey NelkinDan O'HerlihyMichael CurrieHorrorMysterySci-Fi