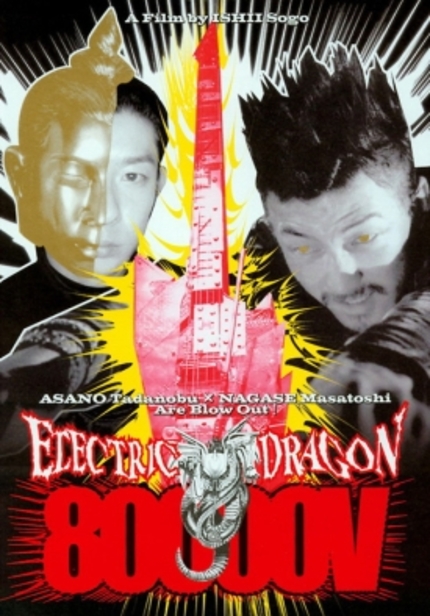 Electric Dragon 80000V belongs on the list of films that created a small yet fanatic niche for Japanese movies at the start of this millennium. It's guerrilla film making at its craziest, bringing some of the brightest talents of modern Japanese cinema together to create something highly unique. Definitely not a film for everyone, but if you've got the least bit interest in Japanese punk cinema, you simply cannot miss out on this one.

Sogo Ishii (August In The Water, Dead End Run, Kyoshin) made quite a ripple in the international (underground) film scene with this film, especially when he literally blew the speakers at a high-profile film fest (I believe it was Rotterdam) when showing his film there. Legend goes that Ishii himself kept asking to raise the volume, wreaking havoc on the people who just wandered in to watch an off-beat Japanese genre film. Then again, it's always best to go into an Ishii film at least a little prepared, so they had it coming.

Electric Dragon 80000V was shot in three mere days, with a minimal crew and minimal concept. It's punk cinema at its wildest, tackling a simple concept head on and making the absolute most of it. The film is carried by punk formation MACH-1.67 (a collaboration between Tadanobu Asano and Sogo Ishii himself) who used the film as background visuals during their live concerts. Most of the film was realized by Ishii and Asano (going from soundtrack to editing, acting and even calligraphy), only aided by that other Japanese acting phenomenon, Masatoshi Nagase, playing the villain in this film.

The story is almost too stupid and shallow to summarize, but I'll give it a shot anyway. Dragon Eye Morrison is a lizard detective who got electrocuted at a very young age. Ever since he's been electrically charged. The electricity never really left his body, but through the years he learned to cope with his rather unique condition. He is sought out by another electro-nutcase, Thunderbolt Buddha, who seems to believe there's only room for one electrically-charged human being on this planet. Buddha tracks down Morrison only to infuriate him, resulting in an electrified final battle. Now, if you believe this paragraphs contains too many spoilers, let me assure you that this is hardly relevant when watching the film.

Visually the film owes a lot to the likes of Tetsuo and Eraserhead. Gritty, high-contract black and white cinematography add a stylish shine, some clever shots and camera angles do the rest of the work. Most of the visual effects seem to be hand-drawn (think lightning/beam effects from the 60s Kaiju films) but thanks to the sharp black and white cinematography they still manage to integrate quite well. For a film that was shot in only three days, Electric Dragon looks remarkably dashing and attractive.

The score ... well, I may not be a big fan of punk music and I probably wouldn't listen to it outside the context of this film, but this is the perfect example of how to do a freakin' music score. It's loud, aggressive and shamelessly in your face. It also helps that the score features a heavy dose of distortion and noisy touches, which is a bit more up my alley. There's a perfect synergy between visuals and music, creating an atmosphere that makes you tingle all over. Or shudder in disgust, if you really can't take this kind of music. It's a big shame I never experienced this film in a live movie theater, it must've been a pretty unique experience (at least, as long as the speakers didn't die on you halfway through).

Aoart from two short scenes, there are no secondary actors present. Asano and Nagase carry the film all by themselves. No sweat for these guys though, you can see they feel very much at ease handling this kind of silly material and they really give it their all. They bring both characters to life and even though there's just very little in the way of background story or actual character development, by the time they face each other in battle there's a healthy, sparkling tension between the both of them.

Electric Dragon 80000V is all about the fun, there's not a serious moment to be found. The dialogues are completely nonsensical ("Conserve electricity!"), the story is staggeringly whimsical and the pacing is as random as can be. It's pure comedy gold without the actual laughs and punchlines, mixed with a lavish punk-drenched finishing coat. If you expect anything more from this film you will surely be disappointed, then again, why would you expect anything more if it executed this well?

As to how this films compares to other (Japanese) (cyber)punk film, I believe it somehow found its own little niche within the genre. It's definitely not as zany or chaotic as Tsukamoto's Tetsuo, there are a few passages where Ishii drops the pacing a little and allows the audience a little breather. Visually it looks very impressive, but without the raw, ultra low-budget edge of other peers (think Fukui's films). Where it really shines is when music and visuals come together to hijack the film from it's simple storyline, just to bring you something that is truly unique and memorable. There are only a few films out there that dare to place this much focus on their music and I am pleased Ishii/Asano were ready for the challenge.

With only 55 minutes between start and finish, Electric Dragon 80000V is a quick watch. That said, if you don't appreciate what Ishii is doing here it might still feel like a two hour hell. If you don't mind the raging soundtrack, silly storyline and black and white visuals though, it's a film you can watch over and over again without ever getting bored of it. Definitely one of the best films Ishii ever made and one of the films he will be remembered for.
Tweet Post Submit