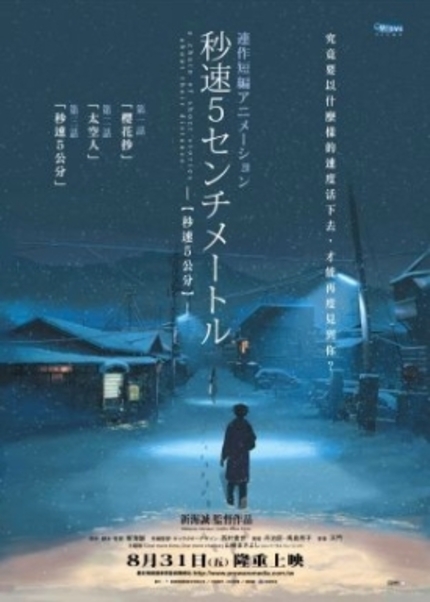 With Matoko Shinkai (Hoshi no Koe) gearing up to present his latest film to the Western world, I figured it would be a good time to revisit some of his former glory. Byosoku 5 Senchimetoru is an exceptional piece of cinema and undoubtedly the film that introduced Shinkai to a broader audience. Four years after its initial release, it's still as remarkable as when I first watched it, having lost none of its splendor or power whatsoever.

Shinkai will forever remain the man that worked himself up from one-man animation team to high-profile anime director in just a few years time With each consecutive film Shinkai's team of contributors keeps growing, but even for a film featuring the technical excellence Byosoku 5 Senchimetoru does, the list of credits remains frighteningly short. Even though Shinkai clearly takes his time (3-4 year gaps between each film), it's pretty much remains impossible to comprehend how he manages to ever complete his films with such a small staff.

Byosoku 5 Senchimetoru is presented as a collection of three separate shorts. Each short represents a different phase in the relationship between Takaki and Akari and stands well on its own, but it did feel somewhat unnecessary to include ending credits for each short throughout the film. Especially when considering the overarching storyline and stylistic similarities of these shorts, as they form one solid, thematic whole. I would've liked it a little better if they had just edited the shorts as one film and added collective credits at the end of the film. Not that it matters that much, once the shorts start you'll be wowed plenty to forget such tiny mishaps.

Shinkai shows us Takaki and Akari, two best friends on the verge of becoming a couple. Once again distance plays a huge part in how the story unfolds, as they are forced to move away from each other, never fulfilling the promise of their relationship. As the distance grows between them, so do their memories fade away, but they never really forget about the unique bond they had between them. Each short follows a milestone in the healing process between Takaki and Akari, helping them to live their lives apart.

With Byosoku 5 Senchimetoru, Shinkai takes his visual style to the next level. He's always had the exceptional skill to draw the most amazing backgrounds and landscapes (and they're still absolutely fabulous here), but the character animation always seemed to suffer because of it. He finally fixed that, creating a perfect blend between the backgrounds and animated objects, making the overall effect even more impressive and realistic. Another strong point is the lighting and coloring, especially when the characters are bathing in the rays of the early morning/spring sun. Shinkai's visuals don't just support the atmosphere it his film, they actually define it.

The soundtrack is a bit more on the safe site. Easygoing piano music and soft tunes underlay the more abundant visuals. It goes very well with the mood of the film though, creating a warm and fuzzy atmosphere. Much has been said about the inclusion of a J-Pop track near the end of the film, but the more I watch this film the better I actually like Shinkai's choice. It might be a bit alien for audiences not used to this kind of music, but in the context of the film the song is actually pretty good. The voice acting is decent too, though a little on the sensitive side. Virtually every line is whispered or uttered as if very grave and important. In dialogue-heavy parts it can be a bit much.

For a Japanese drama handling hatsukoi (first love), Byosoku 5 Senchimetoru can be deceptively bitter at times. The visuals may be lush, the soundtrack soothing and the overall atmosphere calming, it does not mean that our two protagonists are facing an easy relationship. Shinkai often hints at certain events, only to reveal a darker, less rosy reality later on. Each of these moments is a little punch in the gut, though effectively hidden from plain sight. He repeats this structure in every short, and even though the film does end on a reassuring note, you can't help but feel a little down once the credits start rolling.

The final short, though the shortest, is definitely the most powerful of the three, freeing the viewers from their romantic preconceptions and serving them a taste of unapologetic reality. The first time I watched this film I was genuinely surprised by the bitter undertones, and even now it still baffles me how cold this film is below its warm and fuzzy exterior. Shinkai created a strong contrast between the underlying themes and the reigning atmosphere, resulting in an interesting challenge that still stands strong after multiple viewings.

Some people won't really pick up the film's bitter core, for them there are still the lovingly detailed visuals and the stunning atmosphere. Considering the small team that worked on this film, it's a miracle that it still succeeds in looking this technically proficient and overall wonderful. Byosoku 5 Senchimetoru is my favorite Shinkai, but it's clear he's still improving with each new film he makes. I'm eagerly awaiting his next project, but you could do worse than watching this film again, just to kill some time until his latest gets a Western release. Definitely recommended viewing.

More about 5 Centimeters Per Second