[UPDATE: Pre-order Link/Restoration Video] We Are Going To Eat You, In High Definition! ZOMBIE Comes To 2 Disc Blu-ray October 25th 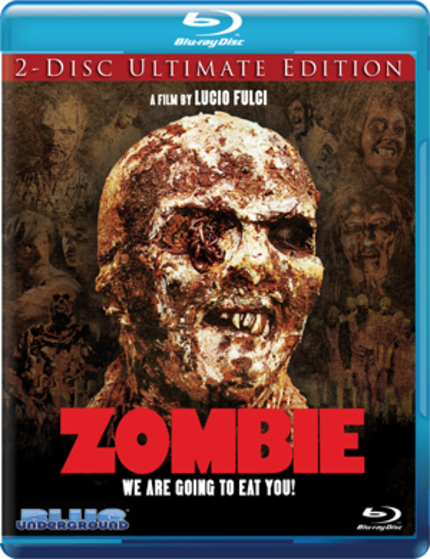 [Subsequent update! Amazon has a pre-order link AND Blue Underground have posted a neat little video showing part of the restoration process for Zombie.  Cool stuff for video geeks!  The brand new ZOMBIE restoration premieres next week at Fantastic Fest!]

[Update to note that the press release states that Zombie on Blu-ray and DVD is ALL REGION, I thought that was worth noting]

Following up on my post from a couple of weeks ago where I casually mentioned that Blue Underground were preparing Lucio Fulci's Zombie (Zombi 2, Zombie Flesh Eaters) for October, I got an e-mail from them today.  Now we've got the full awesome details on the release, as well as a neat bonus trailer for the theatrical re-release of this film, beginning with a premiere of the new restoration at Fantastic Fest 2011.

Blue Underground have a pretty solid record, and this is one title I think they understand requires kid gloves.  If anything gets gorehounds up in arms, it would be a company fucking up Zombie.  We're probably pretty safe from that though, and I'll certainly let everyone know how it looks as soon as I get my hands on a copy for review.

In the meantime, there are a TON of excellent looking original extras.  This is definitely going to be an edition to cherish.  I don't have a pre-order link yet, but I will post when I do.

THE DEAD ARE AMONG US!

In Italy, it was considered the 'unofficial sequel' to DAWN OF THE DEAD. In England, it was known as ZOMBIE FLESH EATERS and banned as obscene. In America, it was called ZOMBIE and advertised with the depraved tag line "WE ARE GOING TO EAT YOU!" Tisa Farrow (THE GRIM REAPER), Ian McCulloch (CONTAMINATION), Al Cliver (CANNIBALS), and Richard Johnson (THE HAUNTING) star in this worldwide splatter sensation directed by 'Maestro Of Gore' Lucio Fulci (CITY OF THE LIVING DEAD, THE HOUSE BY THE CEMETERY) that remains one of the most eye-skewering, skin-ripping, gore-gushingly graphic horror hits of all time!

Blue Underground is proud to present ZOMBIE in a new 2K High Definition transfer from the original uncut and uncensored camera negative. Each flesh-eating frame has been lovingly restored to skull-rotting perfection under the supervision of Cinematographer Sergio Salvati (THE BEYOND). Now fully-loaded with hours of brand new Extras, this is the Ultimate Edition of ZOMBIE!

And the kicker, Blue Underground are advertising it as ALL REGION!  Come on folks, you can't lose!
Tweet Post Submit

Pre-order ZOMBIE on Blu-ray at Amazon