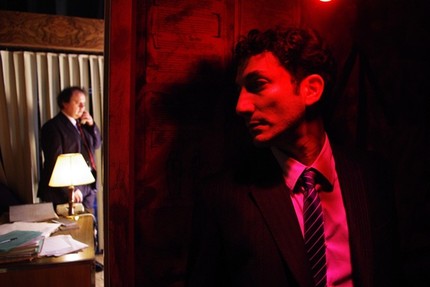 Vaquero (Juan Minujín, 2011). In his prickly survey of the CTC Programme for Cinema Scope magazine, Argentine critic Quintin singled out Vaquero as "a mess: an actor's narcissistic try at making a film about a double of himself and showbiz, but with no care for the task of directing nor for the art of cinema itself. It shows nothing of Buenos Aires, except for the fact that there are some really bad movies made there." Quintin is a critic I ordinarily trust and admire and there's no arguing with his firsthand knowledge of Buenos Aires and/or Argentine cinema, though I take some issue with his "review", which sounds alarmingly personal. I take it as an opinion and respect it no more (and no less) than that and, by the law of averages, offer my own.

I don't have to represent Buenos Aires or Argentine filmmaking, so I can appreciate and enjoy Vaquero on what I perceive to be its own comic terms. No, it's not a great film--first efforts rarely are--but it's not quite the mess Quintin makes it out to be. As a portrait of envy, it depicts how a young actor's thought processes sabotage his ambitions and frustrates his opportunities and it does so with an enjoyably self-deprecating humor familiar to fans of Woody Allen, who Minujín clearly emulates. It's a wincing style of humor. Again, in my humble opinion, Vaquero reflects the Buenos Aires' film scene after their economy collapsed and foreign production companies (particularly North American) swooped in to make films on the cheap, compromising local talent. It's a snapshot of Buenos Aires at a specific time. How accurate that is might be another matter but as a snapshot it suffices. CTC programmer Diana Sanchez confirmed this was why she felt Vaquero fit the CTC bill. Minujín exhibits comic range in both his bitter voiceovers that wish everyone successful dead and the neurotic physicality of his performance. Yes, his character is a loser but I don't think the film is necessarily.
Sign-In to Vote
Tweet Post Submit