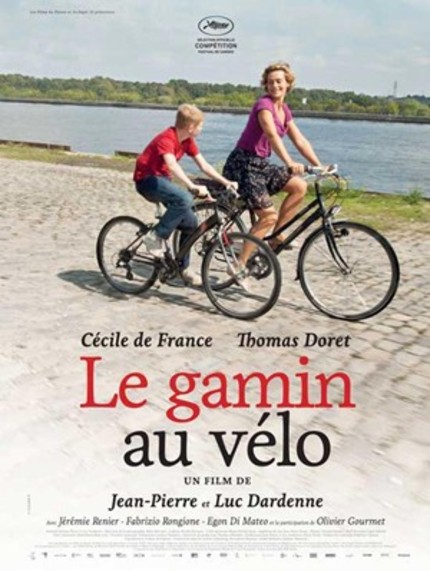 The Kid with a Bike / Le Gamin au Velo (Jean-Pierre Dardenne & Luc Dardenne, 2011). The Dardenne Brothers return to form in their engaging The Kid With A Bike, the tale of a young boy abandoned by his deadbeat father and the emotional delinquency that ensues. Angry, nearly feral, and desperate for his father's love, Cyril (in a volatile turn by Thomas Doret) has to learn that lashing out at the world will not bring him love. Cécile de France--last seen swept away by a tsunami in Clint Eastwood's Hereafter--plays Samantha, a hairdresser who befriends Cyril and strives to contain his volatility; a tsunami of a different sort.

Though The Kid With A Bike harbors now-familiar Dardenne themes of culpability and consequence, its narrative is delivered with a lighter, less realistic touch, and enhanced by a bright palette, emotionally informed by reds and blues. Cyril's red jacket becomes an indelible image of his frantic pedaling to find a place where he belongs. And the punctuated usage of Beethoven's "Emperor Concerto" suggests the larger spheres of feeling that this small boy is hungry to access.

The Kid with a Bike

Do you feel this content is inappropriate or infringes upon your rights? Click here to report it, or see our DMCA policy.
Jean-Pierre DardenneLuc DardenneThomas DoretCécile De FranceJérémie RenierFabrizio RongioneDrama

More about The Kid With A Bike