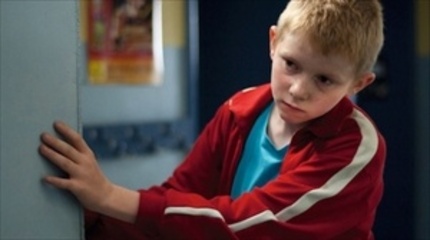 The Dardenne brothers might just be the most reliable film-makers working today. With a unique brand of realist cinema they've made a succession of critically lauded dramas concerned with Belgium's grimmer locales and inhabitants. Often involving low level criminality, the pair of directors frequently collaborate with the same actors time and again (here we have the welcome return of Jérémie Renier) and revisit themes and visual motifs from their previous work. In the best possible way, you won't often be surprised by a Dardenne brothers movie, but what you are near guaranteed is a supremely gripping 90-100 mins of impeccably crafted, character-led drama. And (no surprise) The Kid With A Bike is no different. Yet, despite fitting snuggly into their existing canon of work, it might just be their most optimistic piece yet.

Cyril Catoul (Thomas Doret) is The Kid With A Bike, a troubled young boy whose father has apparently upped sticks and left him in the care of a children's home. During an attempted escape, a chance encounter with hairdresser Samantha (Cécile de France) offers the promise of weekends away from the home and a new life. But as their relationship develops, Cyril struggles with questions around his reluctant father, the lure of criminality on his estate and the prospect of losing his beloved bike... This being a Dardenne brothers film, nothing runs smoothly and there's a typically troubling sense of imminent tragedy lurking just around the corner.

A remarkably tight construction means not a single shot is wasted and not a single word without resonance. The story kicks off the instant the credits have finished, not bound by languid establishing shots or perfunctory set-up. From the off, we're down and dirty with Cyril, feeling his pain and anger through the directors' unsentimental lens. Characters are treated with maturity and seen through an emotionally perceptive eye that casts aside the need for clunky back story or naff explanatory dialogue - they live in the present, and the narrative is concerned with just that. We draw our own conclusions from the information given, and with such pros at the helm the pickings are rich. It's never short of completely gripping throughout its runtime.

Cécile de France is fabulous as the hairdresser who falls for the young boy's charms, giving a nuanced performance which skillfully conveys the huge challenge she's taken on by fostering this tearaway. Doret too is magnificent and, though of a different temperament, puts in a showing that recalls Thomas Turgoose's career-making turn in This Is England. You fear for his safety as he wrestles with how to judge others intentions toward him, perpetually wavering between acceptance and rejection. In a stylistic departure, key moments of his trauma are accentuated by a recurring classical riff (Beethoven's Emperor Concerto) which, whilst conspicuous in its rarity, works well.

With some endearing moments and tentative humour, The Kid With A Bike threatens a familiar bleakness that never quite comes and wears an ultimately optimistic tone. It's also perhaps the Belgian duo's most accessible movie for those not so well versed in their oeuvre. Yet, despite this, it's the familiarity of master craftsmen at work that makes it such a pleasure. Plus ça change...

The Kid with a Bike

Do you feel this content is inappropriate or infringes upon your rights? Click here to report it, or see our DMCA policy.
Jean-Pierre DardenneLuc DardenneThomas DoretCécile De FranceJérémie RenierFabrizio RongioneDrama

More about The Kid With A Bike