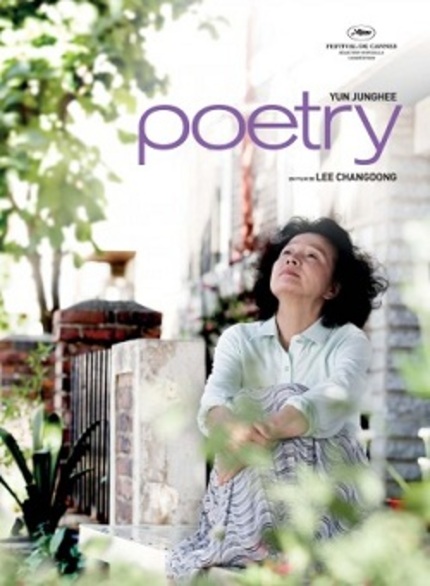 (Alzheimer's, suicide and gangrape are not worthy of poetry, but their impact on life is.)

One of the big treats of this year's International Film Festival Rotterdam was having South-Korean director Lee Chang-dong himself introducing his newest movie "Poetry".
He was even kind enough to stay for a brief Q&A session afterwards, no mean feat as he went to the festival straight from the airport with jetlag working against him, and this was a nightly screening.

By the way: this is a link to the interview I did with Lee Chang-dong, one day after this screening.

"Poetry" is about an elderly woman struggling with her circumstances and her sense of morality when her grandson appears to be involved in a gangrape. As is usually the case with Lee Chang-dong the story carries a strong social punch while the acting is spot on. Is it any good though? Read on...

Yang Mija is an old woman living in the city with her teenage grandson, an unthankful and rude lout left her by her divorced daughter. Working several jobs despite being past pensionable age, Mija struggles to get by but manages, if barely. But then fate delivers her two blows in quick succession.

Firstly, she is diagnosed as being in the preliminary stage of Alzheimer's disease, with a slow but sure decline into dementia ahead of her.
Secondly a young girl in the neighbourhood commits suicide. And the girl's diary tells she was repeatedly raped at school by a gang of boys, including Yang Mija's grandson.

The parents of the boys decide to raise money to pay off the girl's family so as to avoid prosecution. As Yang Mija starts taking poetry lessons to delay the progression of Alzheimer's, she also has to search for sources of money to pay her share of the financial settlement.

During the Q&A session after the IFFR-screening, I asked writer-director Lee Chang-dong how he would compare his film "Poetry" with Bong Joon-ho's film "Mother", given that both films have an elderly lady as the protagonist, someone who has to deal with the fact that the offspring they continuously care for may have committed a terrible crime. After a long thinking pause Lee Chang-dong replied simply: "I would not compare them at all, as they are two completely different films."


True words, as despite the similar premise it is hard to think of two films which have less in common. For starters "Poetry" is not a thriller. It does not have an "exciting" story. You see someone trying to cope in a bad situation like in other Lee Chang-dong films, and the story does not necessarily focus on the attempts made to solve anything but rather functions as a description of the people involved and what makes them tick.

As such, "Poetry" is less a movie about sudden revelations and more about slow realisations. Even if it takes a while, protagonist Yang Mija is finally able to correctly assess what is happening around her and acts in the only way she feels is appropriate given the situation. This is a very sedate film, and Lee Chang-dong is not out to entertain his audience. Rather, he's giving a lecture and just keeps things interesting enough to keep listening. If films like "Oasis" contained several scenes which made you want to jump into the film and punch several characters (repeatedly, IN THE FACE), "Poetry" in comparison never brings this rage, opting instead for a more gentle indignation. Somehow it is no less powerful a film though.

That "Poetry" does manage to succeed so well in what it strives to show is due to a smart script (by Lee Chang-dong himself) and a powerhouse performance by Joon Yeong-hee, who was pulled out of retirement by Lee Chang-dong specifically to play this role. She is magnificent, portraying Yang Mija as a woman worn down (but not out) by life who sometimes gives a weak impression but has a cast-iron moral core to her.

Watching her notice tiny things of beauty in everything for use in her poetry while her life deteriorates around her is gently heartbreaking, also because the audience cannot see a possible way out of her predicament. There is no empty rethoric to be found here, or overt sentimentality, or silly heroism either. Yang Mija never turns into SuperGranny. But how she eventually decides to cope with her impossible situation is very believable because of the authority, dignity and sheer nobility Joon Yeong-hee brings to the role.

Lee Chang-dong's newest film is a slow, ponderous one. The subject could have made for a depressing and dour film, yet instead "Poetry" settles for poignant and honest sadness. Its main virtue is its view on morality and the excellent acting by everyone, especially Joon Yeong-hee in the lead role who is magnificent.

Strongly recommended for the patient and contemplative, as is usual with the works of Lee Chang-dong. Rotterdam audiences awarded the film a 4.3 out of 5.