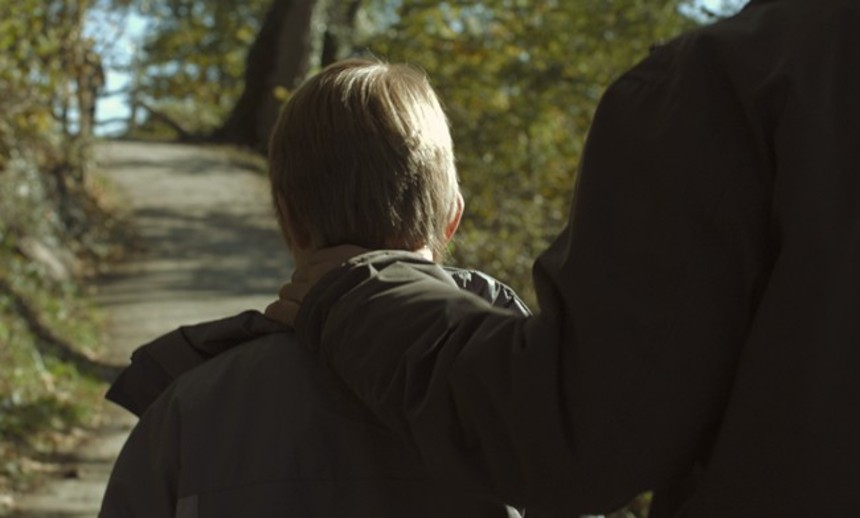 Do the sensibilities of Michael Haneke offend? If your answer is yes then stay far away from the directorial debut of Haneke casting director Markus Schleinzer. The first feature, Michael offers an exceedingly simple dramatic snapshot covering a period of five months in the life of Michael, a pedophile, and a ten year old kidnap victim he keeps locked in the basement. It would be an uncomfortable scenario for any cast and crew to bring to life but Scheinzer and his lead Michael Fuith (Rammbock: Berlin Undead [2010]) do a solid job of laying the groundwork for audiences to be drawn in to the disturbingly mundane details of a horrendously deviant crime scene. Evil? It is almost completely faceless here and yet also compelling. It is recognizably part of, not the movie world, but the real one where children are abused everyday.

Dialogue is sparse, shots are mostly static and the color palette is bland. There is no doubt the underlying undeniable power of the piece lies in a, more or less, complete absence of melodrama. Instead the sad reality of sexual abuse is brought to life in emotionless calm still life. A man washes his privates in a sink (we don't see them), a man asks a child to walk toward him (the scene cuts). In the most shocking moment of the film we see an exposed penis, but what is really exposed is the hollowness of the act, the devouring of another in an effort to fill an empty void within. There is no doubt this is a well intentioned film, earnest in both the desire to give us a glimpse into a man who is, perhaps, irretrievably, broken but a look at the world where such men ply their lusts.

Michael Fuith gives a powerfully understated performance of completely believable sociopathy. The movie itself offers a story in which there are definitely twists and turns but they are, as mentioned above, exactly the sorts of twists and turns that upend the dreams and desires of the best and worst of us. The movie also expertly incorporates humor and pop music, creating points of disturbing empathy for Michael. Yet if the film has a flaw it is much like the flaw that Michael demonstrates. It can't connect with it's main character enough to feel what made him the way he is, it only hints at it. And the truncated too-abrupt ending suggests that noone knew what to do with this character. The movie could have used something here. Not necessarily closure. But a sense that someone took responsibility for the life we had witnessed instead of merely giving the chance to see it.