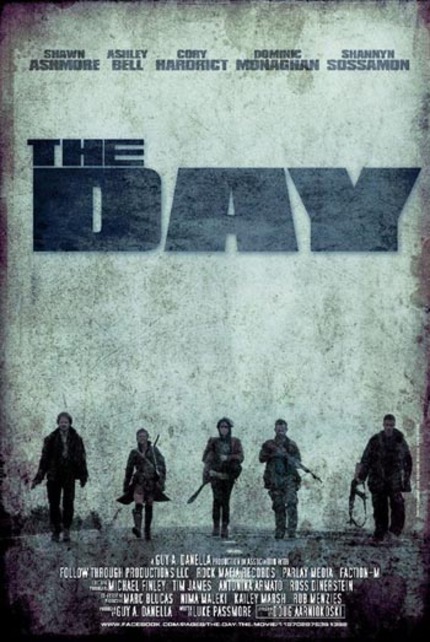 The apocalypse has arrived and what's left on earth is a brutally dangerous place in the impressive debut feature from the mind of writer Luke Passmore. Directed by Doug Aarniokoski, The Day packs a solid punch with its very well told story that isn't afraid to fully commit to its premise. Add in a great cast that lends big budget credibility and you've got one of the best low budget actioners of the year.

Set in a post-apocalyptic wasteland not dissimilar from McCarthy's The Road, The Day launches us right in with a group of five survivors fighting their way towards a promised land. While the filmmakers don't waste a lot of time with backstory, we do know two jars of seeds guarded vigorously by leader Rick (Dominic Monaghan) hold the key to salvation. He and longtime buddies Adam (Shawn Ashmore) and Henson (Cory Hardrict), Rick's girl Shannon (Shannyn Sossamon), and newcomer Mary (Ashley Bell) are willing to do whatever it takes to protect the seeds. This has obviously meant killing as exhibited by the group's inventory of weaponry and worried accounting of ammunition. There is something out there trying to get them, but they aren't going down without a fight.

The majority of action takes place at an abandoned farm house that the group takes shelter in when Henson falls ill. This becomes the setting for the film's siege dynamic which delivers plenty of entertaining kills as the gang tries to keep the baddies at bay. The shuttered up house also provides an ample stage for the interpersonal drama to play out between this rather adept cast led by Bell, Ashmore and Monaghan. While the film's super low budget is unfortunately exhibited in the pretty substandard CGI, the cheesy effects are overshadowed by a cast that seems fit for a much bigger picture.

The most exciting part of The Day is the world that writer Luke Passmore has created. During the Fantastic Fest Q&A, Passmore revealed The Day is the middle installment of a trilogy with the first chapter written and ready to go and a third chapter in the works -- as is setup pretty damn well in this film's finale. By hinting at past events throughout, Passmore has managed to both avoid the heavy exposition that plagues so many films while at the same time whet the appetites of an audience eager to learn more about what the hell happened in this world. The Day marks the arrival of a lot of new talent and a much larger world just begging to be brought to the screen.

More about The Day