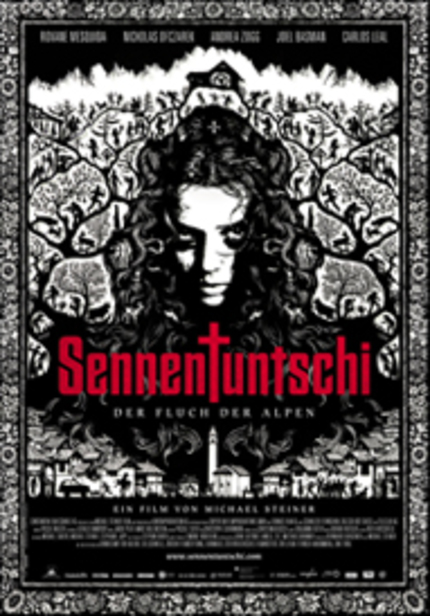 God battles the Devil in the Swiss Alps, or so the opening scenes of Sennentuntschi might lead one to believe. The residents of the picturesque village of Trepunt, high on a mountainside, are firmly convinced that a young, mute woman (Roxane Mesquida) is, in fact, the Devil, or, at least, resembles a satanic figure far too closely for their comfort.

In a shocking turn of events, a young priest serving as the local church's sacristan has been found hanging in the belfry, an apparent suicide. The townspeople have barely absorbed the idea that "a dark force crept into his soul," as the head priest tell his congregants. "The Devil." With their worst fears and superstitions confirmed, and the younger man freshly placed in his grave, the appearance of a dirty and mysterious woman only stirs them up further.

Sebastian Reusch (Nicolas Ofczarek), the town's sole police officer, tries to quell their loudly-voiced objections to her presence while he begins his investigation. Whipped up by the priest, however, Reusch is facing a growing mob of neighbors who are calling for her head, believing that she is responsible for the death of their sacristan. Some of the townspeople are also worried about Albert (Joel Basman) and Erwin (Andrea Zogg), two farmers who live nearby. Might she have killed them too?

It's obvious that the doughy Reusch doesn't have the support of the villagers; Mayor Notter (Hanspeter Müller), for one, is openly hostile toward him, and the priest fairly well denounces him in an angry sermon. He seems like a local boy who got some police training and returned to serve the community, only to discover that no one respected him in the first place.

So Reusch has his hands full, but, nonetheless, doggedly heads off to investigate. Albert and Erwin are not in their cabin, but they're hunters, so that's not surprising. Reusch returns to the village and continues trying to identify the young woman, who may or may not be suffering from amnesia, may or may not be the Devil but for certain acts like a feral child one moment and a lost waif the next. Then we get to meet Albert, an older, earthy sort of fellow, and Erwin, a young, mute fellow, as well as Martin (Carlos Leal), a volunteer from the city who wants to learn about farm life.

Oh, did I forget to mention that all the action outlined above transpires in 1975, and is part of a very extended flashback? The modern-day prologue shows a little girl waving to a helpful young man and then accidentally discovering the skeletal remains of an unfortunate soul. The little girl picks out the helpful young man from a photo book of missing persons; the adults promptly say: "That can't be! That's Albert! He disappeared in 1975."

If my method of relating the plot is somewhat confusing, then you're properly prepared for the sometimes incoherent narrative offered up by director Michael Steiner, who co-scripted with Stefanie Japp and Michael Sauter. (And here it seems appropriate to admit that I know next to nothing of other films from Switzerland or the country's cinematic narrative traditions.) After a long, long stretch in which Sennentuntschi plays like an indifferently-paced police procedural, the twists and turns of the storytelling labyrinth become more apparent. and the knots begin to tighten. Before too long, the film has morphed into a gripping suspense thriller, with character reveals that are queasy to contemplate.

The second half of the movie rewards the patient viewer. Past a certain point, I simply sat back and wondered what other tricks Steiner and his team might have up their sleeves. It's manipulative head-spinning, to be sure, but it's done with a straight face, and both Ms. Mesquida and the Swiss Alps are tremendous distractions while you're wondering what to make of the fractured timeline and the whiplash ending.