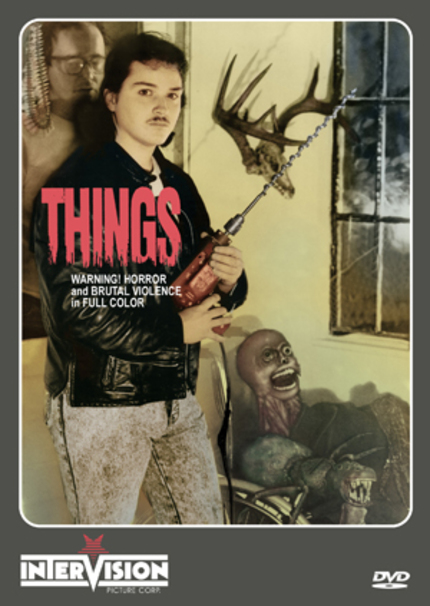 In 1989, it became the first Canadian shot-on-Super 8 gore shocker commercially released on VHS.  Today, it remains perhaps the most bizarre, depraved and mind-boggling chunk of 'Canuxploitaion' ever unleashed upon humanity. Adult film superstar Amber Lynn and co-writer/producer Barry J. Gillis star in this surreal saga about two friends who visit a remote cabin, only to discover a womb of monstrous horror that demands graphic dismemberment. It's an inexplicable orgy of eye ripping, beer guzzling, boob baring, skull drilling, sandwich making, chain sawing, bad acting and post-sync dubbing from co-writer/producer/director Andrew Jordan that has spawned its own disturbing cult of fans. Some will be repulsed. Others may be transformed forever. But you have never seen anything like THINGS.

I'm not sure Things can be reviewed. It sits so far outside of anything that I've ever seen that it may critically unassailable.  Canuxploitation creater, Paul Corupe states in the bonus features, Things is outsider art made by people who very much felt like insiders in the world of horror.  It is truly a unique experience, and not one that everyone can handle.  I don't mean that as a challenge, I just mean to say that the film does things to one's mind.  At a certain point you start to wonder if it is you that's crazy or if the film is really that awesome/retarded/insane/terrible, and there is no answer.  If you stick it out, you're one of us, not that that is something to brag about, but it is a kinda of litmus test for the deranged film fan.

The film begins with a nightmare, I think, in which a disgustingly sleazy half bald weirdo demands to have sex with an even weirder chick in a devil mask in order to "get" a baby.  The chick undresses only to reveal to him that the baby is already got, but there's something horrifyingly wrong with it, kind of like this whole movie.  Andrew Jordan and Barry Gillis, the co-writers, went into Things wanting to create a horrifying experience for the viewer, but what came out of that desire is truly misshapen, bizarre, and horrifyingly wrong.  The entire film, save for the inserts with porn star Amber Lynn reading some kind of omnipotent news report from Hell, is overdubbed in the most absurd way.  This really obvious overdubbing adds to the surreal character of the film in a really insane way.

Things is mostly concerned with a couple of hosers hangin' out in their kitchen drinking beer.  Occasionally they wander into a different part of the house where something really fucked up is happening. They encounter mutilation, giant bugs, and countless other THINGS.  Eventually the film attempts to find a focus, but it really can't, it is too damaged too early in the "plot" to really make any kind of honest attempt at coherence, but that's okay, who cares?

Things is not about what happens, it is about how it happens, and how it happens is madness.  The film is disjointed, amateurish, frustrating, and at times nauseating.  However, the film is also ambitious, challenging, depraved, frustrating, and at times nauseating, so I think in the realm of home made Super 8 horror films, that makes it a success, no?

Things has been rare on VHS in the past, and the fact that ANYONE made the effort to release it on DVD is impressive on its own.  The film looks rough, like a fifth generation VHS dub, but I can't really fault the transfer, it kinda works.  The audio fares a tiny bit better, with the super synthy 80's soundtrack and post sync sound coming through pretty clearly.

Intervision went balls out on the extras for this release, and everyone they talk to has a definite opinion, that's for damn sure.  There are two commentaries, one with the filmmakers, wherein they proclaim that the film is pretty good, which is really only further proof of the damaged minds that birthed this Thing.  The second is an "audio viewing party" from Los Angeles' premier cult rep house, The Cinefamily, which is much more jovial and incredibly entertaining.  In addition there are Things testimonials from Tobe Hooper (reacting to the Things trailer at a Con), Jason Eisener (Hobo With a Shotgun), Paul Corupe of Canuxploitation.com, and Joe Ziemba & Dan Budnik of the premier VHS review site Bleeding Skull.  Each was filmed in a different style and with a different crew, and this makes for an entertaining look and the many different ways Things can be interpreted.

In addition to the new features, there are also several archival pieces that are making their way to home video for the first time.  There is a 20th anniversary reunion of the cast on a cable access show, there is some BTS footage of Amber Lynn's day of shooting, and also some vintage TV appearances from Barry Gillis that are absolute gold, as well as the original trailer.

Things is fucked up.  I can't say that I mean that in a good way, because it is what it is.  You'll love it or you'll hate it, Things will not appeal to anyone's middle ground.  I loved it, it isn't something I could watch every night, my eyes might melt, but I can see throwing things on an a party in the background and examining the guests faces as three quarters head for the door and the remaining quarter become entranced.  You have to see it to believe it.

Do you feel this content is inappropriate or infringes upon your rights? Click here to report it, or see our DMCA policy.
Andrew JordanBarry J. GillisAmber LynnBruce RoachDoug BunstonHorror

Order THINGS on DVD at Amazon