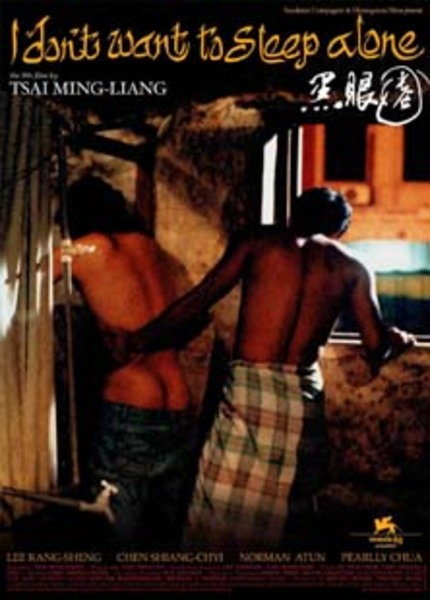 Ming-Liang Tsai's films are an acquired taste, no doubt about that. If you plan on watching I Don't Sleep Alone without any prior knowledge of his previous films, I would advise you to reconsider. Not that I Sleep Alone is a (direct) sequel or anything, but even I, a seasoned Tsai fan, felt remarkable lost at some points. Familiarity with Tsai's typical style of film making will definitely help you through those moments.

Tsai's films are often advertised as humorous dramas, but don't be fooled by this categorization. While it's hard to contest the facts (his films are essentially a mix of drama and comedy), Tsai's humor is so dry and absurd that many people won't even pick it up. On top of that the pacing of his films is incredibly slow and the dramatic tension is quite low, so those of you expecting to sit down for an amusing piece of entertainment cinema will end up bored to death.

Even though I Don't Want To Sleep Alone sees Tsai experimenting just a little with his trademark style, it's still very much a Tsai film that will leave haters perplexed and annoyed. Once again we follow the adventures of Lee, who is now roaming the streets of Kuala Lumpur. It doesn't take long for Lee to get beat up and he ends up with a local guy taking care of him.

From there on things get a little vague. Since we only get to observe it's not always easy to keep track of the actual story. Tsai makes it even harder by having Lee play a second character, a rather dubious decision that complicates things a little too much. For a long time I figured the film was making time jumps, turns out these characters just aren't even related to each other.

Visually not much has changed. Tsai cuts as little as possible, playing scenes until they become just a little absurd, or until something genuinely moving happens. Kuala Lumpur provides some welcome variation from the usual Taipei sights, but apart from that Tsai paints his shots with as much patience as he used to.

The soundtrack mostly consists of natural sounds and old Asian pop songs. The best is saved for last though, when a pure voice bursts through one of the most epic images in the whole film and blesses I Don't Want To Sleep Alone with one of the most immersive endings I've seen in a long time. Pure bliss, drawing strength for minimal resources, this is Tsai on top of his game. The beginning is a bit more noisy than I had come to expect from a Tsai film, but that seemed to be part of the Kuala Lumpur flow.

As always Kang-Sheng Lee takes on the lead role. He's been a constant throughout Tsai's films and will no doubt remain like that until Tsai's last film. It's an interesting career experiment that paid off for both parties quite well. The acting is solid as always, though you have to appreciate the lack of dialogue and the more visual (yet still subtle) style of acting of Lee. His character is not all that easy to read, which will form a barrier for many of you.

I Don't Want To Sleep Alone excels in showing the mundane. Simple actions that are usually left out of other films because they are deemed to boring, but which become touching and real when the camera remains fixed on these simple events. It's a somewhat unusual approach to cinema though, and so it's difficult to predict how an individual reacts to it.

Still, the structure of the film is just a little too complex, which shifts the viewer's attention from the core of Tsai's film, trying to find out what exactly is happening plot-wise. Lee's double role plays a big part in that and even though Tsai might have a proper explanation for doing this, I feel the film would've worked better if he had just chosen a different actor, or at least hinted more at the meaning behind the double role.

In the end I Don't Want To Sleep Alone is another typical Tsai film, with some slight experimentations that are in no way big enough to attract new viewers or to push away existing fans. If you're new to Tsai, try some of his earlier films first as they are a tad more accessible while still displaying his trademark style. This is a film that pretty much recommends itself, hopefully it will attract some new fans to the work of Tsai.

I Don't Want to Sleep Alone

Do you feel this content is inappropriate or infringes upon your rights? Click here to report it, or see our DMCA policy.
Ming-liang TsaiKang-sheng LeeShiang-chyi ChenNorman AtunPearlly ChuaComedyDrama

More about I Don't Want to Sleep Alone