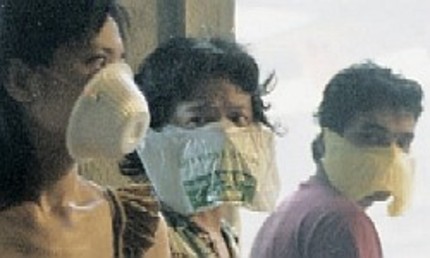 Earlier we reported that Strand Releasing allegedly was going to bring out Malayan movie "Hei Yan Quan" aka. "I Don't Want To Sleep Alone" by director Tsai Ming-Liang. This was the first official release for this film we knew of and yoohay, it was going to be English-friendly!

Well, you can leave the "allegedly" because that's exactly what they did early November.

I scooped it up for several reasons, most important of which was the rave reviews it got in Rotterdam at the 2007 Film Festival and a personal recommendation by someone I know. I was also warned though that this was a VERY slow movie, and seeing it in a cinema had probably granted her a focus to keep watching it that home-viewing on DVD may be lacking.

In other words: when you're bored stiff at home you're more likely to zap for another channel, while in the cinema you might be mesmerized because you are so much more IN the movie.

Which is a valid warning I guess...
So did this bore me? Read on!

An Indian immigrant worker living in Kuala Lumpur spots a beaten-up homeless guy lying in the streets. With the help of friends he carries the unconscious guy back to the disheveled building where the immigrants live, and slowly nurses him back to health. Once back on his feet again, this drifter divides his attention between the immigrant and a local waitress, who is happy to meet someone else besides the paralyzed man she is caring for. And that's almost the whole plot.

"I Don't Want To Sleep Alone" is a thoughtful movie pondering the nature of relationships, physical and non-physical. Looking through my list of recent reviews I seem to be watching only weird and/or exploitation stuff as of late, so this film provides me with a much-needed change.

Well, film...
You might be forgiven when calling this a series of stills. The camera is fixed as if cast in concrete and each shot lasts a long time. I didn't count but wouldn't be surprised if this two-hour-movie has less than 150 cuts in it. But each of these shots tells it's own story, almost like little movies within the movie. A lot of time is given to showing people doing chores like scrubbing mattresses or washing clothes. Other shots show the incredible closeness and necessary intimacy that comes with caring for a patient.

All shots have one thing in common and that is the following: a beautiful composition. Since I started creating some mastheads for this site, my wife and I will occasionally shout "Masthead!" when we spot a particularly nice image in a movie (only during repeat viewings, of course!). We'd go hoarse during "I Don't Want To Sleep Alone" because it is like one long continuous Masthead, each frame deliciously crafted.

That doesn't mean that what's on display is always so pretty, though.

Later in the film many shots get a bizarre setting as the area where the story takes place gets hit with a huge cloud of smoke, originating from forest fires in nearby Indonesia. It makes Kuala Lumpur look weird and otherworldly, the more so since the dust cloud was real and actually there during shooting. This results in some remarkable footage, like that of a young couple who desperately try to kiss each other but keep getting coughing fits whenever they take their makeshift gas masks off. An unsubtle but nice metaphor for the stifling atmosphere surrounding these people.

All shown characters are basically trapped in a life of endless and loveless labor. The drifter is different: he seems to be doing nothing all day except receive the attention which is lavished upon him, without giving much back. But the funny thing is, he does. He gives the other characters a feeling of being needed, of fondness and friendship. All of these roles are played adequately as the models they are but I'd like to single out Norman Atun as the immigrant, who managed to both chill AND move me by his stunning portrayal. He only gets a couple of scenes to really show his acting chops, but he uses them magnificently.

Where director Tsai Ming-Liang really scores points is with the way he makes his story universal. Even though the story takes place in Kuala Lumpur it doesn't show any of its landmarks, not even the famed Petronas Towers. Any place where different cultures meet would do fine. Most of the main characters have no names (the castlist mentions them by their role, like homeless guy, boss lady and waitress). Tellingly, none of the leads share even a single word with each other throughout the whole movie. The three main parts are each of a different ethnicity, and the relations shown have no regards for sexual preference. A bold move in Malaysia, where homosexuality is allowed for immigrants but more-or-less legally forbidden for the Malay people. It got this movie in hot water with the authorities but it doesn't show anything (too) explicitly.
It does however help in showing what seems to be Tsai Ming-Liang's point: we all need some friendliness and intimacy, regardless of whatever difference you can put up between two people. One of the final shots in the movie shows several characters cuddled up, sleeping together. Not an explicit orgy, but a gentle shot of snoozing people, clothed, content with each other's presence. No matter how harsh these peoples lives are, no matter what the future will bring them, they didn't want to deny themselves this one moment of feeling safe and cared for, of not sleeping alone.

A beautiful movie with a glacial pace, this is definitely NOT one for the impatient. If you can take the pace (in which case this film is VERY much recommended) you will be rewarded with lots of memorable images.

In general audio and video are good except for a few points:

-Burnt-in subtitles. Ouch! You only need them during three or four sentences throughout the movie, but they're also translating the lyrics of any song playing on background radios. Which is quite annoying!
-Combing. Yes, the moment you want to freeze a particularly beautiful frame you might get two for the prize of one, hideously mixed through each other. Unnecessary.

I'd also say there is a fair bit of edge enhancement but frankly that would be nitpicking a bit, it looked fine on my TV.

As extras you get five trailers: one is the original theatrical trailer for "I Don't Want To Sleep Alone" and the other four are for other Strand releases.
Frankly these worried me a bit to start with. I am familiar with exploitation trailers and knowing Strand Releasing specializes in Gay & Lesbian-themed releases I was a bit wary of what would be on display here.
And of course I was being silly: the four movies are "Syndromes and a Century", "Love for Sale" (by Karim Aïnous), "The Man of My Life" and "Eights in the Dusk". All well known in the festival circuit as decent films with, indeed,some Gay & Lesbian themes in them.

All in all a nice disk from Strand Releasing, who can certainly be commended for bringing this release on the market.

Order it at our affiliate.
Earlier coverage of this movie at Twitch

More about I Don't Want to Sleep Alone