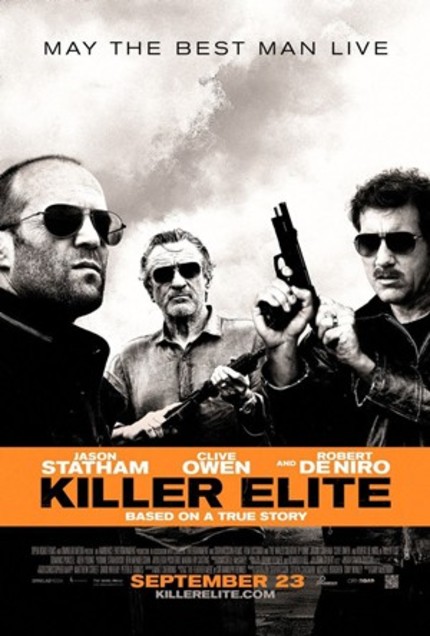 You know what pleases me about Gary McKendry's Killer Elite? All signs are that he understands what people want from an action film and - more importantly - doesn't confuse those desires for stupidity. He also, evidently, understands that people take a certain amount of pleasure in taking a big, serious actor like Clive Owen and calling him Spike.

A match-up made in tough-guy heaven -- Jason Statham, Clive Owen and Robert De Niro star in Killer Elite.  Based on a shocking true story, Killer Elite pits two of the world's most elite operatives - Danny, an ex-special ops agent (Jason Statham) and Hunter, his longtime mentor (Robert De Niro) - against the cunning leader of a secret military society (Clive Owen).  Covering the globe from Australia to Paris, London and the Middle East, Danny and Hunter are plunged into a highly dangerous game of cat and mouse -- where the predators become the prey.

With Killer Elite about to premiere in Toronto before a September 23rd wide release distributors Open Road Films have just released a new clip from the picture. Check it below.
Tweet Post Submit