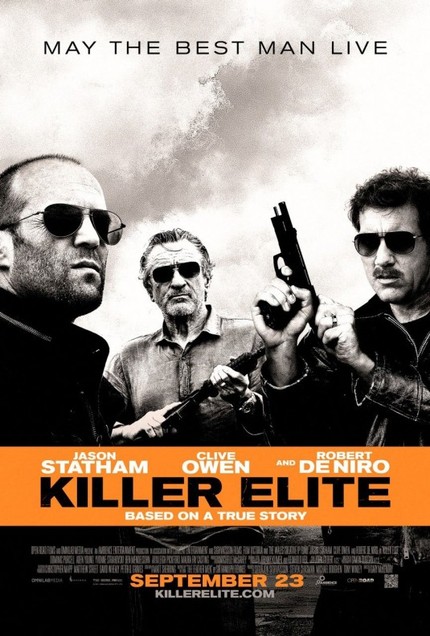 For the first ten minutes or so of its running time Gary McKendry's Killer Elite plays like the greatest film John McTiernan never made. The picture kicks off strong with a slick, tightly choreographed action sequence with just the right amount of soul. It's a piece loaded with guns, explosions, facial hair and manly men doing manly things with verve. Sure, Jason Statham is playing a part that he can do in his sleep by this point but he keeps doing it because he does it well and there's a certain undeniable, enormously endearing charm to watching Robert DeNiro running around with a machine gun. It makes no attempt to reinvent the wheel but it does what it does - for this one sequence, at least - with such style that all the picture really needs to do to be a success is stay in that pocket - or close to it - for the rest of its running time.

Plagued by a shoddy script and decidedly underwhelming supporting cast Killer Elite stumbles badly after its strong opening and never recovers. Though there are well constructed moments scattered here and there throughout the film it's all too little, too late with the picture being very much less than the some of its parts do to its failure to ever connect those parts in any meaningful way.

Statham is Danny, a high end assassin who we meet on the cusp of his latest job - a complex hit in Mexico. They pull it off but not before Danny takes a bullet in the shoulder, having frozen when he realized there was a child in the target's car. Danny has to be dragged out of the line of fire by his mentor Hunter (Robert DeNiro), and he finds the whole thing so jarring that he swears off the life of a killer forever.

But forever only lasts for a year, Danny pulled back into the game when an exiled oil sheik takes Hunter hostage and will only release him if Danny hunts down and kills the British SAS members responsible for the deaths of his three sons. Danny accepts the job, a move that attracts the attention of a shadowy organization called the Feather Men made up of former SAS soldiers who send their watchdog Spike (Clive Owen) to put Danny down.

The issues with Killer Elite run deep and the vast majority of them lie with a script that simply should never have been filmed, not in its current form. Co-written by McKendry and Matt Sherring - a first feature for both - the script is both wildly over complex in certain areas, jumping from nation to nation constantly, while incredibly underbaked in others.

Key aspects of character motivation and plot are often simply ignored. Owen - whose character should provide the main conflict of the picture - just sort of drifts through, his Spike never really being given any concrete reason to care that Danny is killing off these men. What's in it for the Feather Men? Why are these guys after Danny instead of the regular SAS? No idea, frankly.

For a film as built around star power as this one is it is strangely resistant to having its stars actually share the screen. Owen doesn't show up at all until the half hour mark and doesn't do anything at all substantial until the film is half over. After Statham and DeNiro separate after the opening sequence the major trio of stars have barely any screen time together, a factor sure to disappoint many.

And while Statham, DeNiro and Own all deliver perfectly serviceable performances every other character in the film - every single one of them - is weak. Whether this is a factor of poor writing or poor acting is hard to say, exactly, though it strikes me as a combination of both.

Killer Elite is a surprising selection for a major film festival both in that it is an openly commercial film and that it is one with significant flaws in its execution. Placed in the recent Statham canon - and make no mistake, DeNiro and Owen are in his film, not the other way around - Killer Elite is significantly better than Blitz but a step behind The Mechanic, a film with smaller ambitions but better results.