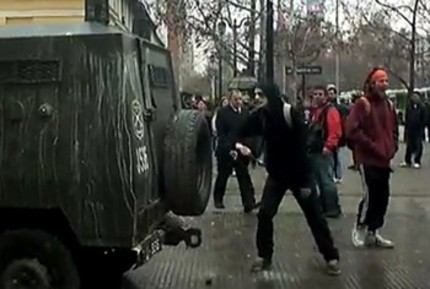 In a bizarre case of life imitating art a student protestor in Chile last week expressed his displeasure at the current state of Chile's education system by dressing up as the villain from Richard Gale's short film The Horribly Slow Murderer With The Extremely Inefficient Weapon and bashing away on a Chilean special forces vehicle with a spoon.

Uploaded to YouTube July 28th following a student protest march this appears to be 100% legitimate - the account it was posted from has been active for over a year - and is bizarre, hilarious, and a weirdly effective political statement. You can check both the Chilean video and the short film the character is taken from below.
Tweet Post Submit