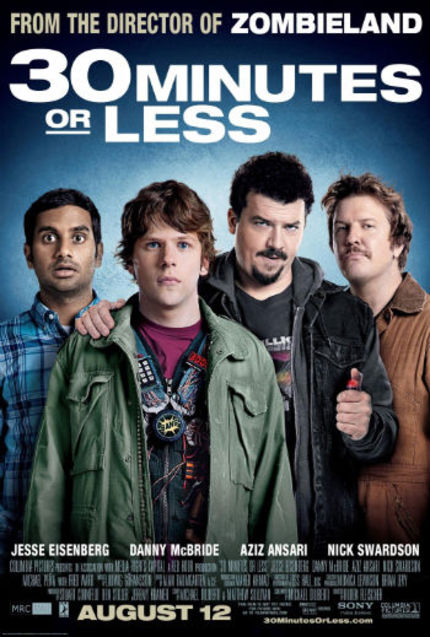 The best comedy of the summer, 30 Minutes or Less is cool and refreshing because all it wants to do is make you laugh.

Rather than come to a screeching stop to impart pretentious and trite life lessons, the film barrels along at high speed, gathering momentum even as it occasionally changes gears to allow breathing space between physical gags, profane outbursts, and character revelations. It's the equivalent of stopping for a red light by downshifting and stomping your foot on the brake simultaneously. The motor continues to hum; the steering wheel vibrates; the radio keeps playing.

Ruben Fleischer directs with the same, apparently artless and carefree style he brought to 2009's Zombieland. While 30 Minutes or Less is a lesser film -- you can hear the gears grinding occasionally, some of the jokes fall flat, the comedy stylings of Danny McBride and Nick Swardson wear thin -- all you need to do is hang on for a few minutes until the engine catches and roars back to life. Fleischer relentlessly drives things forward, not worrying if the film sometimes strays from a straight path to its destination or fails to obey all the traffic signs.

McBride and Swardson play Dwayne and Travis, no good lazy bums who are living off Dwayne's dad in a nicer neighborhood in Grand Rapids, Michigan. Dwayne's dad, known as The Major (Fred Ward), is a retired vet who won $10 million in a lottery and is tired of Dwayne's continual lack of industry. Dwayne is confident he'll receive his his father's winnings as an inheritance, but he's worried the old man will spend it all before he dies.

While receiving a lap dance from Juicy (Bianca Kajlich), his favorite stripper, Dwayne idly mentions his fantasy of knocking off the old man. Hearing how much money is involved, Juicy suggests that Dwayne hire her gangster boyfriend Chango (Michael Peña) to do the deed. To come up with the money to pay Chango, Dwayne dreams up the idea of strapping a bomb to the body of a hapless stranger in order to force him to rob a bank -- or get blown up.

Dwayne is the more devious and psychotic of the two, a mean bastard who's motivated entirely by self-interest, while the gullible Travis is sweeter, dumber, and more loyal, considering Dwayne his best friend and willing to do anything he says.

In a parallel close friendship, Nick (Jesse Eisenberg) and Chet (Aziz Ansari) are closer to equal footing, though Chet is clearly pulling ahead in the career achievement category. He's recently secured a full-time teaching position and welcomes the thought of moving calmly, if boringly, into adulthood.

Nick is still working as a pizza delivery driver, madly racing around town to meet his employer's "30 minutes or less or it's free" delivery guarantee. Nick doesn't appear to have any specific ambitions in life, as far as a career or meaningful work is concerned, but he's decided he wants to pursue a relationship with Chet's younger sister Kate (Dilshad Vadsaria, pictured), who has recently announced she'll be moving away for her own career opportunity. Nick's admission of interest in Kate prompts a fiery confrontation with Chet and the termination of their long friendship.

And then, late one night, Nick makes a fateful delivery and wakes up with a bomb strapped to his chest.

The danger for a movie like 30 Minutes or Less is that if you don't find it funny, there's not much else to grab onto. Eisenberg locks into his hesitant, fragile, uncertain mode, the one that keeps getting him confused with Michael Cera, but that makes him a good foil / straight man for Ansari. The teaming of McBride and Swardson is more problematic, in that Swardson's bumbling goodness doesn't entirely cancel out McBride's more loathsome persona.

Overall, however, director Fleischer keeps nearly all of the plates spinning in the air, resulting in a celebratory feeling when 30 Minutes or Less crosses the finish line with a total running time of just 83 minutes. At last, a comedy that doesn't overstay its welcome.

30 Minutes or Less opens wide in the U.S. and Canada today. Check local listings for theaters and showtimes.