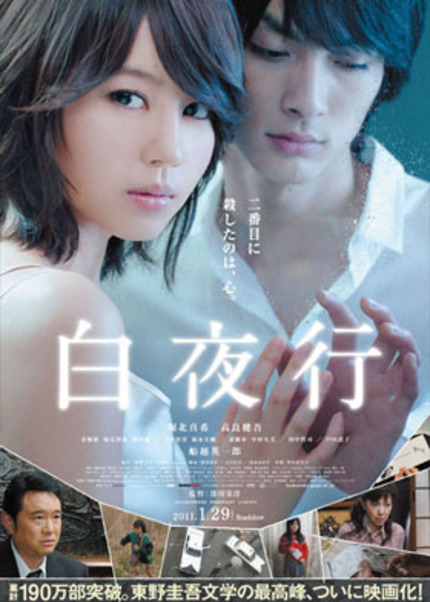 Into The White Night is a good film. Too bad I had to watch a non-anamorphic screener with a time code running across the top and the word

stamped smack dab in the center of the frame. Call me a snob, but it doesn't seem like the ideal way to experience a two and a half hour movie. Especially one as intricate as this. I recommend you see it in the theater instead.

But the show must go on.

Based on a novel that has already been adapted twice, Night is a story that spans two decades and straddles the rich man/poor man divide. A pawnshop owner is found dead under mysterious circumstances, but after months of investigating, the crime goes unsolved. It is a crime that will haunt Detective Sasagaki throughout his career and into his retirement. Parallel to this, the victim's son and the daughter of the main suspect lead seemingly unconnected lives as they attempt to put their dark past behind them.

SAMPLE
The first half hour of Night plays like a 70's police procedural and I couldn't help but be reminded of David Fincher's Zodiac. The stark color pallet and inventive framing create an oppressive atmosphere and an almost clinical emotional detachment. But then the film abandons this approach, or at least dilutes it, and becomes more of a Sirkian (since Dickensian has been used to death) drama by focusing on the lives of the two kids. This is where the narrative begins to lose focus, slowing down to divide its time between the children and the detective. Not everything seems relevant to the plot, and at times it feels like we are watching a completely different film. We repeatedly leap ahead- five, six years at a time- as the kids get older and the trail gets colder. Almost twenty years have gone by before the three threads finally reconvene for Night's climactic reunion.

I'm not quite sure I got it all, seeing as I was watching the story unfold from behind a screen of large, transparent letters, but I'd be willing to give the film another shot. There was something there that made me stick it out in the first place. I had to watch the damn thing in two sittings, but a lesser film would have gotten shut off within the first ten minutes.

SAMPLE
I'm proud to say I persevered. Into The White Night is an epic journey. Epic in time and scope, but insular and meditative as well. Sure, it meanders at times, but it reaches its destination eventually. Insert some BS about patient viewers being rewarded here. Because if I was able to enjoy the film under such imperfect circumstances, it should be a cakewalk for the rest of you.
Into The White Night has its North American premiere on Friday, July 22nd at Japan Society. It is the closing film of Japan Cuts 2011. Tickets and info HERE.

Joshua Chaplinsky also writes for ChuckPalahniuk.net. He was a guitarist in the band SpeedSpeedSpeed and is the poison pen behind thejamminjabber, although he's not so sure he should admit it.

Into the White Night