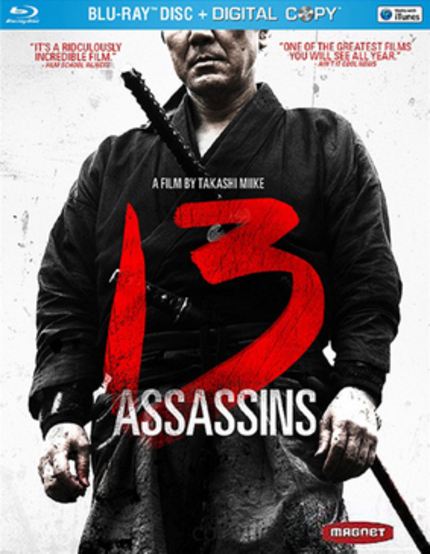 Cult director Takashi Miike ("Ichi the Killer", "Audition") delivers a bravado period action film set at the end of Japan's feudal era in which a group of unemployed samurai are enlisted to bring down a sadistic lord and prevent him from ascending to the throne and plunging the country into a wartorn future.

13 Assassins is definitely Takashi Miike's most accomplished mainstream film so far. I say that as a compliment.  Miike may be famous for his outrageous genre films, but he has also tried his hands at mainstream drama.  Those films have found success in Japan, but outside of a few Miike maniacs in other countries, they haven't taken hold internationally.  It is easier to point out how crazy something like Audition is, or ask what the fuck Zebraman was on about than it is to settle in with what should be a very straight film and find something extraordinary about it.  However, with 13 Assassins, Miike has made a very straight film and he's managed to make it absolutely riveting without the insane flourishes we've come to expect.  That, my friends, is skill.

We've written pages and pages about this film, so I'll limit my opinions for brevity's sake.  13 Assassins is a great film.  The opening two thirds are all set up, but rarely boring. Those first 80 minutes make the last 40 minutes possible, and the last 40 minutes is pure adrenaline overdrive.  Miike's total massacre is just that, a visceral, gripping, and innovative action sequence that stretches over forty minutes without blinking.  The skill is takes to draw out an action sequence over that length is staggering.  We Miike fanatics new he had it in him, and now so does everyone else, but don't take my word for it...

13 Assassins is a gloriously glossy genre picture that gives an impossible and heroic situation all the glory it is due. It is curious to see Miike do something so straight-forward and crowd pleasing. I am sure he will be off to a new picture (or three) which is as different and wacky and unconventional as is his wont. Sit back and enjoy his stop in epic myth making.
-Kurt Halfyard
13 ASSASSINS should delight fans of Miike's work, samurai aficionados and lovers of Japanese Cinema in general as it consistently delivers expertly crafted thrills and resonating pathos from the opening ritual hara-kiri to the closing shot of pyrrhic victory. This is not only Miike's best work in quite some time but almost certainly the best samurai film to emerge in the last decade. Simply put, it is a masterpiece.
-James Marsh

There you have it.  There have been a few dissenting opinions, but even those never quite veer into negative territory.  If the worst review you can find on a film is that it is something we've all seen before, and the antecedent was awesome, I think you're in good shape.  13 Assassins obviously comes very highly recommended.

Magnet Releasing have delivered a typically outstanding Blu-ray edition of this film.  The image is spotless, crisp, sharp, bright, and detailed.  The audio is rousing, the bass is full, and the surrounds are very active, especially during the climax.  Nothing to fault them on here.

As I mentioned when I announced this disc, Magnet have included the 126 minute "international cut".  This is the cut that every country EXCEPT Japan has seen.  There is no English subtitled edition of the longer director's cut planned as of this moment.  That being said, the disc does include the missing footage as deleted scenes.  Honestly, while the film plays beautifully without them, I think they would at a bit of substance.  We get a bit more back story for some characters, and there is something to be said for that.  Someday we'll probably get the longer version, but for now, I'm satisfied.  Beyond that, the extras are pretty average, there is a brief interview with Miike, and the theatrical trailer, as well as trailers for other Magnet films.

Magnet Releasing's Blu-ray disc of 13 Assassins is a beautiful presentation of an outstanding and rousing film.  The lack of a director's cut edition is disappointing, but this will suffice for now.  Buy it, you won't be disappointed.

Order 13 Assassins on Blu-ray from Amazon.