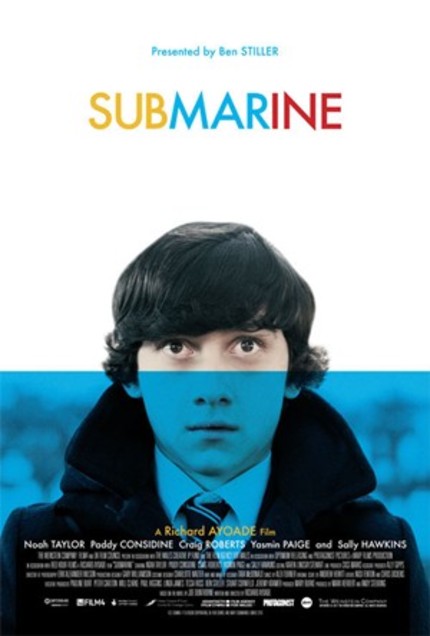 Young Oliver Tate, the lead of Submarine as played by Craig Roberts, is terrified that his parents are going to break up. Try as he might, he just can't quite get to the root of their mutual dissatisfaction, and takes to spying on them and contriving circumstances to get his mother and father back together. I suspect that having a son like Oliver might create frissures in even the strongest marriage.

Writer-director Richard Ayoade's (The IT Crowd, Man to Man With Dean Lerner) filmmaking debut is an assured, funny, and occasionally brilliant study of a beautiful loser in 1980s England. Based on the novel by Joe Dunthorne, Submarine is a story about a boy trying to make and understand connections between his parents, between his friends and/or acquaintances, and most importantly, between himself and the pretty little firebug, Jordana (Yasmin Paige), who, for a time, decides Oliver might be someone worth keeping her company.

Ayoade's direction is dry and terribly droll. By extension, so is Oliver who seems intent on making his way through life by being both bulletproof and clever. He is less of the former than he is of the latter. While the movie relies on a few too many pop cues and slightly overlong montages set to sad songs, the tone is just right for a character like Oliver who is almost defiantly in his own head. As Oliver, Roberts is pitch-perfect for the character, investing him with that tenuous balance of charm and teenage insufferability that's just right for the role. With his big, round eyes, skinny frame, and cracking voice, Roberts looks like a ready target for life's little disasters and self-inflicted calamities.

Ayoade surrounds Roberts with a terrific supporting cast, including Noah Taylor as Oliver's marine biologist father, Lloyd, who's going through a terrible bout of depression. Lloyd can't seem to get things going, which is distressing to his wife, Jill (Sally Hawkins), who's realizing that she's tired of being miserable and might be better of spending time with her former flame Graham (Paddy Considine), a new age guru who has in order of importance to his character: a new trite age philosophy based on energy and color, a penchant for martial arts, and a sweet van. It's obvious to everyone that Graham would really like to get Jill into that van. Considine is the movie's secret weapon.

Of course the key to this kind of movie is "the girl." With her bangs and bob, compact body and half-smile, Jordana makes a great foil for Oliver. If I were Oliver, I would think there's something startlingly appealing about Jordana who is quite clearly trouble because she happens to know quite clearly what she wants. She wants to be even more bulletproof than he is, but makes the mistake of needing him. Teenage boys, as a rule, are very difficult to rely on when it comes to the heart, but she can be forgiven for believing that Oliver is as together as he pretends to be. I think that Ayoade's script "gets" that about Oliver and by extension young men of a certain age trying to figure out who they want to try to be.

Submarine is the kind of movie that could fall apart under the weight of quirk, but thankfully, Ayoade has discovered the correct alchemy of script and cast to make the movie work. I would love to see this director unleashed on more material in the future--I suppose the best compliment that I could pay the film as a whole is that I could say the same about really any of the talent associated with it.

Submarine was screened as part of the 37th annual Seattle International Film Festival and opens wide on June 10.