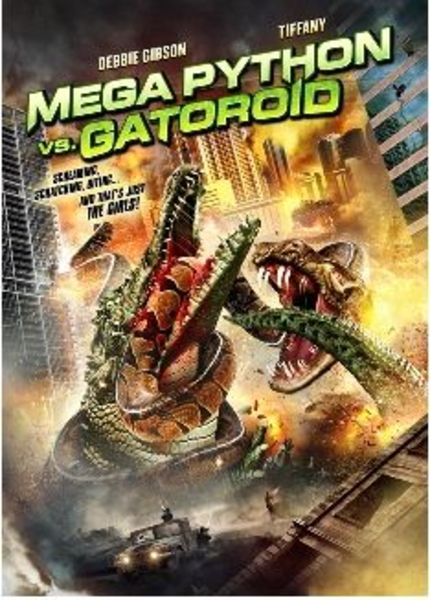 Giant snake, giant gator, and a pair of washed out teen queens. Is it as bad as you'd expect? Oh, yes, Pet Semetary director Mary Lambert has turned in an absolutely hideous film with Mega Python vs Gatoroid, but one that is deliberately and hilariously so. This is total trash now available for viewing in glorious high definition thanks to BluRay releases from eOne in Canada and Image Entertainment in the USA.

The story, such as it is, goes like this.

Debbie Gibson is quite possibly the most ignorant environmentalist on the face of the planet, one who enjoys breaking into homes and labs across Florida and stealing all manner of snakes, snakes which she then releases into the Everglades. She brays about how snakes are the top of the food chain - not so much - and deserve to be free. Which would be lovely if they were actually native species, which they're not. And incredibly soon - and for no apparent reason - the snakes she releases grow freakishly large, taking a big bite out of the local gator population.

And, yes, the bite bit is literal. Because despite the snakes in question being constrictors they spend almost the entire movie biting things with only a single squeezing death among the lot. The science in this movie is shit, but I digress.

Tiffany, on the other side, is the local park warden troubled by the dwindling gator population. And when she catches wind of large snakes loose in the 'glades she issues the local hunting population permits to hunt snakes, a move that gets several hunters - and her own fiance - eaten while putting her in direct conflict with Ms. Gibson. Responding poorly to the death of dear fiance Justin, Tiffany declares that these snakes have clearly been sent to destroy her happiness and that the only solution is to create a bigger gator. Which she does by pumping chickens full of experimental steroids and feeding those chickens to the local gator population. Of course the snakes get some, too, leading to both populations becoming freakishly large. Cue carnage.

Among the things you might expect someone to say in the course of this film which they never do is "Gosh, how did that snake get so big?" Because even pre-steroid the snakes are big enough to tear a man limb from limb. You'd think the 'scientist' who introduced the snakes into the wild just days before, when they were still small enough to fit into a bag, might notice that and comment on it. She never does. And neither does anyone else. You might also think someone, at some point, might say "Gosh, it's sad that local hunter with strong ties to the community was just eaten." Apparently hunters come cheap in the Everglades because they never say that, either. Clearly they are too busy making molotov cocktails from bottles of Jack Daniels and tampons to be concerned about such things.

Yes, that really happens. Right after former Monkee Mickey Dolenz gets eaten. And slightly before a snake eats a train. Really.

The acting is horrible. The script is abysmal. But what this film has going for it is sheer, flat out ridiculousness. The first half is a bit rocky, true, because this is the part of the film when the actors are asked to talk a lot and everyone pretends that there's a story. But then the beasts get stupid big, Tiffany and Debbie Gibson have an epic cat fight, trains get eaten, nuclear reactors get threatened and everybody runs around screaming a lot. The more screaming and the less talking Mega Python vs Gatoroid features in any given minute has a direct effect on how much fun that minute is. Clearly the point here was not to make a movie but to make a drinking game. And, on that level, it's pretty damn fun.

And, yes, this one has been deemed worthy of separate DVD and BluRay releases, both of which dropped June 21. While I'm not a particular videophile I watched this from the BluRay release - courtesy of Canada's eOne - and have no complaints whatsoever on a technical level. The disc itself is rather bare bones - with just a basic behind the scenes featurette - but the audio and video quality were both bang on.

Do you feel this content is inappropriate or infringes upon your rights? Click here to report it, or see our DMCA policy.
Mary LambertNaomi L. SelfmanTiffanyDebbie GibsonA MartinezKathryn JoostenActionHorrorSci-Fi

More about Mega Python Vs Gatoroid