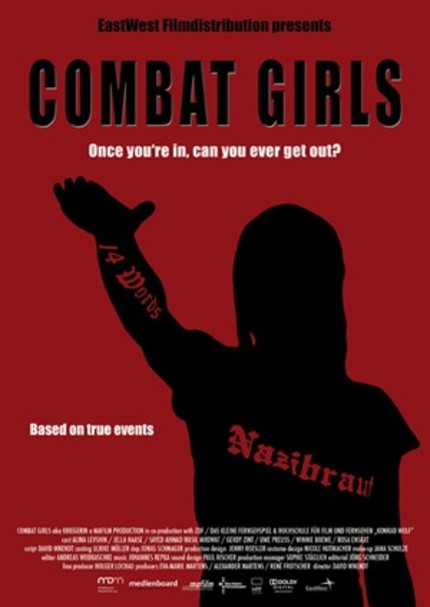 It's a curious thing that movies dipping into the unpleasant world of the neo-Nazi or skinhead movements are almost always told from the male perspective. There are some fairly obvious reasons for that, of course, but there's more of the story to tell and Germany's David Wnendt is doing just that with Combat Girls (Die Kriegerin).

Marisa, a 20-year-old German girl, hates foreigners, Jews, cops, and everyone she finds guilty for the  decline of her country. She provocates, drinks, fights and her next tattoo will be a portrait of Adolf Hitler. The only place she feels home is the Neo-Nazi gang she belongs to, where hate, violence, and heavy parties are the daily rules. When 14-year-old Svenja joins the group, Marisa appears like a role model to her: she fits the purest idea of a combat girl fighting for the group's ideology. But Marisa's convictions will slowly evolve when she accidentally meets a young Afghan refugee. Confronted to him, she will learn that the black and white principles of her gang are not the only way. Will Marisa ever be able to get out of this group?

An English subtitled trailer for this one has arrived and it looks like powerful stuff. Take a look below.

Do you feel this content is inappropriate or infringes upon your rights? Click here to report it, or see our DMCA policy.
David WnendtAlina LevshinJella HaaseSayed AhmadGerdy ZintDrama