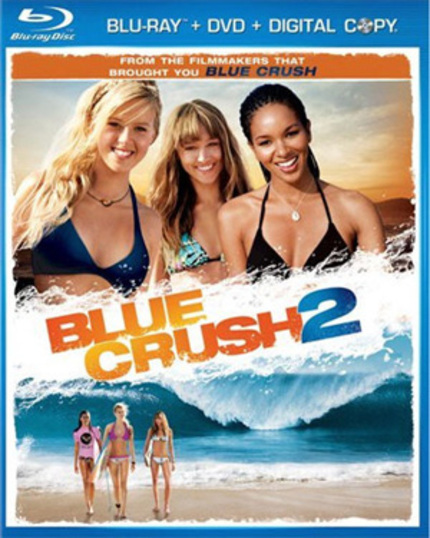 I suspect that despite the lack of clamor for a sequel to moderately successful 2002 surfer-girl drama, Blue Crush, its direct-to-video sequel might go over well with the tween and teen girls that movie appears to be targeting. It's a mix of boys, rivalries, travel, and adventure that might appeal to those viewers who are reaching the age where those things matter to them, and it's probably less important to them that the film may not have particularly strong performances or an especially rich story. What will likely matter to them is that it's a story of a girl who probably looks how they want to look, being free in ways that they want to be free in a country that may seem exotic to them (South Africa, of all places).

Directed by veteran producer Mike Elliott from a script by Randall MCormick (Titan A.E., Speed 2), Blue Crush follows 18-year-old Dana (Sasha Jackson), a Beverly Hills surfer girl who wants to discover more about her similarly wave-obsessed mother who died when Dana was 5 but apparently left quite an impression. So much so, that after an argument with her stuffy, career-minded father (Gideon Emery), she hops a plane to South Africa, where the waves are high and the production costs are low to follow in her mother's footsteps.

There, she meets a similarly surf-obsessed Zulu girl named Pushy (Elizabeth Mathis), who introduces her to "the family," a group of beachfront squatters who live the hippie life and seem to want for nothing. In another movie, a young girl hooking up with squatters calling themselves "the family" might have more dire implications, but the charm of Blue Crush 2 is that everyone is, at heart, mostly decent, including the pro surfer and sometimes bully, Tara (Sharni Vinson). If it's a spoiler for you that Pushy and Dana earn Tara's respect by the end of the movie, then you must not have seen many films.

If it sounds like I'm going pretty easy on the movie, it's because I am. Blue Crush 2 relies too heavily on montage sequences, and director Mike Elliott only has a couple of go-to ways of shooting the many surfing sequences in the film, robbing the viewers of some potentially exciting moments through sheer repetition. The tone of the movie gets maudlin at times when it otherwise doesn't need to be, and there's a subplot about elephant tusks that seems weird, grim, and then suddenly very trivial.

But when was the last time you saw a movie about sports (yes, surfing is a sport) targeting teen girls? The only other real point of comparison would be the Bring It On movies. It's not about buying things or getting married, and in spite of the presence of two boys vying for Dana's affection, it's not exclusively about a girl trying to find a boy. I have to respect a movie that looks at its audience, and finds something new and interesting for their P.O.V. characters to do.

The video is occasionally soft and the colors occasionally seem a touch too "hot" for the movie. As for the audio, you're not getting anything mind-blowing, and there are occasional instances where the clarity makes characters' re-dubbed lines obvious.

For a DTV movie, there's a crazy amount of bonus features:

"The Making of Blue Crush 2" doc

"Ripping It: Shooting the Surf Scenes"

Feature Commentary with director Mike Elliott and the cast